Enjoy a unique perspective of bustling Venice with a walking tour in the Dorsoduro district. You’ll discover the famous floating city by following off-the-beaten-path routes, passing through hidden alleyways, and visiting unknown sites. Wander through local neighborhoods, enjoy stunning palaces overlooking the canals and beautiful gardens, and finish up in one of the most scenographic spots in Venice.

You’ll start at the 14th-century cathedral Carmini Church, which became famous after appearing in Indiana Jones and the Last Crusade (1989) and Summertime (1955). In this square, you’ll find the remnants of an ancient palace once inhabited by the Moro family known as the "​House of Othello.” Experts consider Palazzo Zenobio one of the most significant examples of late Venetian Baroque design, both architecturally and in interior decor.

Next, visit the Church of Angelo Raffaele, the only church in Venice with two bell towers. Legend says it was built in 416 CE to fulfill a vow. This part of the city is very local, and you can find kids playing in the calle in the afternoon.

Continue to a 12th-century church, San Nicolò dei Mendicoli, with a Veneto-Byzantine tower bell and wooden interiors. The area’s inhabitants (all fishermen) gathered in the church to elect their own doge, who would have dressed in scarlet following a symbolic ritual. You can visit the Doge’s Palace in Saint Mark’s Square to learn about the true doge.

Follow your guide to San Basilio, once the maritime terminal where all the steamers arrived back in the 19th century. Enjoy the views as you overlook the Canale della Giudecca. Giudecca Island lies to your right with its magnificent Mulino Stucky building, an important example of 19th-century industrial architecture, now housing a hotel.

Read more about unique and interesting experiences in Venice. 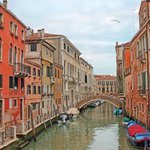 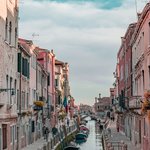 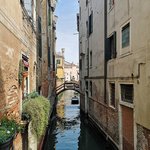 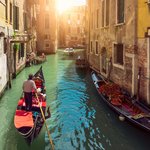 You won’t miss anything on this complete tour of the Doge’s Palace. This...

Escape the crowds of Venice and enjoy a full-day excursion into the...

Discover the history of prosecco, the most famous Italian sparkling...

Discover the fascinating history of Venice while visiting the city’s...

Get your bearings and enjoy a fun, family-friendly orientation walking...

How Many Days Should You Spend in Venice?

Spend 2-3 days in Venice, and you'll be able to experience the city's...

Venice is justifiably one of Italy's most popular tourist destinations,...

Getting Off the Beaten Path in Venice

Venice is one of the most popular destinations on Earth, with a...

Have just one day in Venice? Plan on starting early. It is possible to...

Venice is crammed with attractions, but if this is your second visit or...
Best of Venice