Discover the once-thriving ancient cosmopolitan harbor city of Ostia Antica, also known as the “better Pompeii.” Thanks to its impeccable preservation efforts over time, this site is the best-preserved ancient Roman city in the world. You’ll learn about the workings of the Roman Empire and how trade helped build one of the strongest governments ever to exist.

Enjoy a quick train ride to the archaeological park, where a tour guide will meet you. Enjoy the highlights of the archeological site, which include the Baths of Neptune, home to an impeccably preserved ancient mosaic of Neptune, the god of the sea. You’ll also visit the Forum of the Corporations, the center of commerce and trade for the Roman Empire during the reign of Emperor Augustus. At the Ostia Antica Amphitheater, marvel how, at one time, the theater held 3,500 spectators!

While you walk, your guide will detail how advanced the Roman Empire was in terms of commerce and engineering. You’ll view old storefronts, water systems with hot and cold running taps, and communal latrines designated as housing complexes. You’ll learn how important the Roman Empire’s contributions are to modern-day life.

Read more about interesting historical and mythological experiences in Italy and other activities in and around Rome. 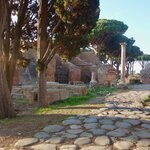 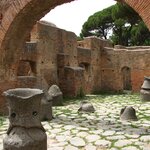 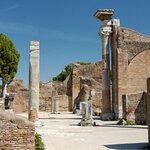 Enjoy an excursion to Frascati, a town famous for its wines since...