For lovers of history and archaeology, there is a wealth of medieval and Roman ruins in the immediate surroundings of Split.

Set on a small island—a stepping stone between the mainland and the much larger Čiovo—is the ancient coastal city of Trogir. It's a small place, and it doesn't take longer than about five minutes to walk from any point in Trogir's historic center to reach the sea. Navigate the narrow stone streets, starting with the Garagnin-Fanfogna Palace, working your way to the Cathedral of St. Lawrence. Here, admire the Radovan's 13th-century Romanesque Portal and the bizarre creatures around the doorposts.

Next, stroll along the Riva, admiring the Romanesque, Renaissance, and baroque architecture and medieval fortress walls as you find your way to the 15th-century Kamerlengo Fortress. Ascend its ramparts for sweeping views over the island. And don't be surprised if you're serenaded by traditional acapella groups called klapa along the way.

As you return to Split, consider a short detour to visit the impressive medieval Klis Fortress. The more than 2000-year-old fortress is perched on top of an isolated rocky eminence. It overlooks Split and the ancient Roman settlement of Salona (now Solin)—the original capital of the Roman province of Dalmatae and one of the five largest cities in the entire Roman empire. Wander the large Roman amphitheater where early Christians were fed to lions—fit for a city of 60,000 at its peak. Salona is remarkably devoid of tourism, making it an unsung gem for those who want a more personal Roman experience.

Discover more historical experiences in Croatia and other activities in and around Split. 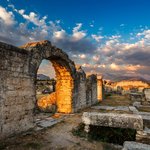 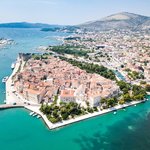 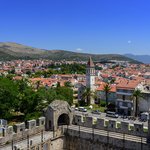 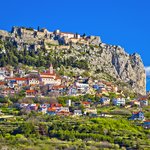 This eight-day itinerary highlights some of Croatia's most popular attractions with a few less-visited gems. Covering the Dalmatian coast from Split to Dubrovnik, you will stop along the way in Ston on the Pelješac Peninsula, as well as enjoy day trips to Trogir, Krka National Park, and the Elafiti Islands. Discover ancient Roman ruins, medieval town centers historic islands, and trek amid rushing waterfalls.

This tour of the Dalmatian Coast explores the historic Old Towns of Dubrovnik, Split, and Trogir, with their cobbled streets and medieval sites. You'll enjoy a day trip to the Pelješac Peninsula and Korčula Island for wine and oyster tastings, and to explore the old walls of Ston. Escape the city with a swim in the waterfalls of Krka National Park, and discover the old Roman city of Salona with its large amphitheater and impressive Klis Fortress.

Immerse yourself in Croatia's stunning beauty and historic cities on this classic 16-day itinerary, beginning in dynamic Zagreb and ending in famous Dubrovnik. You'll cover the length of the country as well as spend time exploring the bucolic hills of the Zagorje, the travertine lakes of Plitvice, the coastal cities of Zadar, Šibenik, and Split, and the islands of Hvar, Korčula, and Trogir. Discover Roman ruins, medieval fortressed towns dotted with ornate baroque and Renaissance buildings, and enjoy a day visiting the Montenegro coast.

Explore the best of Croatia and Slovenia on this 15-day itinerary, from...

Discover the ancient cities and natural wonders of Croatia's stunning...
Best of Trogir