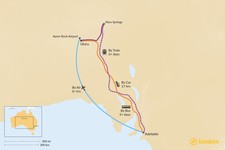 Adelaide is the nearest major Australian city to Uluru, but that doesn't mean that it's close—it's 1000 miles (1600 km) away to the south-east. There are several ways of getting from Adelaide to Uluru, however. Read on to find out more.

Direct flights travel between Adelaide and Uluru a couple of times per week, and many more non-direct flights are also available. Small Ayers Rock Airport (also called Connellan Airport) is near Yulara, a short drive from Uluru.

If you can't get a direct flight, the second-best option is to go via Alice Springs, the nearest city to Uluru, 200 miles (330 km) to the north-east. Other non-direct flights go far out of the way to Sydney or elsewhere first, making them much longer. From Alice Springs you can connect to Uluru by air or bus, or spend a few days in the interesting desert town first.

The 1000-mile (1600 km) journey between Adelaide and Uluru takes about 17 hours if done in one go, but it's not advisable to do so. The trip is much better broken up over several days, and will make for a very memorable Australian road tip. There are several points of interest along the way, such as Port Augusta, South Australia's many lakes, the opal mining town of Coober Pedy, and you could even make a detour to Alice Springs.

Although the road to Uluru⁠ is a long desert road, it's actually in good condition. It's not a dirt track by any means, and you won't need a 4-wheel-drive, which can't be said for all Australian outback roads!

While you can't get directly to Uluru from Adelaide by bus, you can get to Alice Springs. The bus from Adelaide to Alice takes around 20 hours, and from there, buses and tours run regularly to Uluru. It's worth staying in Alice for at least a couple of days, though.

Again, you can't get directly from Adelaide to Uluru by train. But, The Ghan scenic train service runs between Adelaide and Darwin (at the top of the Northern Territory), stopping in Alice Springs. From Alice you can take a bus, a tour, or rent a car to get the rest of the way to Uluru.

Although the train is expensive, it's not just a mode of transport but an entire experience⁠—it's been dubbed a hotel on wheels, and Australia's greatest train journey. It's a great way to enjoy the changing landscapes of South Australia and the Northern Territory without having to drive yourself.

If you have a generous budget, you can start a tour to Uluru from Adelaide. These may include a private car, the train, flights, or a combination thereof. You'll enjoy the benefit of having a guide to tell you all about the sights you see along the way.

Traveling the 1,500 miles (2,414 kilometers) from Sydney to Cairns, the...
Getting Around Australia

This trip to Australia starts in Melbourne with city exploration, a...

On this 10-day trip to Australia, enjoy a mix of city tours and outdoor...

J
Juel B.
Hong Kong SAR China
"Liz planned a perfect getaway, taking in consideration our timetable and price range. She also encouraged us to try new things like the Sidney Bridgeclimb ..." read more
Traveled to Australia as a couple in April, 2022