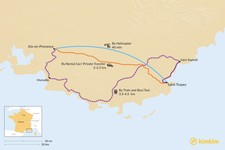 Saint-Tropez is located 63 miles (101 km) southeast of Aix-en-Provence, roughly halfway between Marseille and Nice on the French Riviera. Despite the village’s fame, getting there can take some extra planning—its rocky peninsula lacks a train station, and the resort’s perennial popularity means traffic can be daunting during high season and holidays.

The most straightforward way to reach Saint-Tropez is by self-driving or getting a private transfer, both of which take under two hours. The journey by rail requires a combination of train and bus, takes about four hours, and requires two connections. If money is no object, the fastest (and most expensive) option is to make like the jet-set and charter a helicopter, which delivers travelers door-to-door in 40 minutes.

Incorporate Aix-en-Provence and Saint-Tropez into a tour of Provence and the Cote d'Azur with our 7-day or 11-day itineraries.

The journey via rental car is a fast and straightforward option, allowing flexibility for detours and sightseeing along the way.

The fastest route from Aix-en-Provence to Saint-Tropez travels on the A8 toll highway east across the province of Var, then cuts south on the D558 to the D98A. While this final stretch can see heavy traffic during late summer and holidays, the rest of the trip is relatively fast and easy driving. The main stretch of A8 motorway isn’t particularly scenic, but it passes by some lovely medieval market towns like Saint Maximin-le-Sainte-Baume and Brignoles.

Alternatively, drivers can opt for a slower, more picturesque experience by taking the A50/D98, which heads due south from Aix before turning east through Toulon and Hyères towards Saint-Tropez. While the highway runs inland from the coast, much of the drive is through green, rolling Provençal scenery, and offers the chance to take short side trips to some of the Cote d'Azur's prettiest towns; Cassis and Bormes-les-Mimosas are both worthy detours along the way.

Saint-Tropez is known for its traffic—summer weekends can often mean gridlock for drivers entering and leaving the peninsula. Making travel plans on weekdays or early mornings is usually enough to avoid the worst of the crowds. For daytrippers, it’s easiest to park in the paid public lots near the port or on the outskirts, then walk towards Vieux Port and the center.

Booking a private transfer from Aix to Saint-Tropez is a more expensive option, but it offers the speed of driving with none of the stress. Transfers can direct door-to-door-service, or incorporated into a wider tour of the Riviera, and allow travelers to avoid any worries about navigating or parking. The fastest route is via the A8, which reaches Saint-Tropez in under 2 hours.

Due to the lack of rail service to Saint-Tropez, travel by train requires multiple steps and connections in Marseille and Saint-Raphaël.

Regional TER trains depart from the downtown Gare d’Aix-de-Provence and reach Marseille in 55 minutes. From there, TER and TGV trains leave hourly, reaching Saint-Raphaël in 1:45. At Saint-Raphaël, travelers have two options for the final leg.

The bus (#7601 Varlib) takes 1.5 hours, departing from behind the train station and arriving at the Gare Routièr de Saint-Tropez, a quick walk from the central Place des Lices and the port.

Alternatively, travel by taxi takes 45 minutes and can drop off at the location of your choice in Saint-Tropez.

The fastest way to reach Saint-Tropez is also the most expensive, with prices running in the thousands per passenger. Multiple charter companies offer helicopter trips from Aix-en-Provence to Saint-Tropez in barely 40 minutes, offering unforgettable views across the Provençal countryside and the Cote d’Azur.

Take it all in on this ultimate fifteen-day luxury trip to the French...

Barbara H.
Illinois, United States
"Honestly can't say enough about using your services for this family trip! The tour guides were all amazing and so knowledgeable - Fabio in Paris, Ange for Ve..." read more
Traveled to France as a family in July, 2022
A
Ahmed A.
the United Arab Emirates
"The whole team was very cooperative and great Always got back to me in time to renegotiate certain things I wanted to adjust in the trip (not that there wer..." read more
Traveled to France as a couple in June, 2022

Lyon K.
Singapore
"Truth be told, we took a leap of faith when we engaged KimKim.com for our honeymoon in Southern France, because no one around us had heard of KimKim.com befo..." read more
Traveled to France as a couple in July, 2022

Jennifer S.
Virginia, United States
"Valentine helped us a wonderful trip to France. She made suggestions for itineraries, tours, hotels--everything. She was responsive and communicative. Kimkim..." read more
Traveled to France as a couple in June, 2022
X
Xincheng Z.
Colorado, United States
"Josee spent a lot of time with me before we had the travel plan finalized. She is very professional and details oriented. Everything is perfect. The locatio..." read more
Traveled to France as a family in June, 2022

Krista B.
Oregon, United States
"We really appreciated the care and attention that Valentine took to listen to our wants for a family trip to France and make it a reality. The experiences an..." read more
Traveled to France as a family in June, 2022