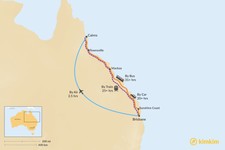 Brisbane and Cairns may be in the same state, but they're about as far apart as it's possible to be within Queensland: Cairns is 1000 miles (1700 km) north of Brisbane. But, as they're both popular destinations with travelers, it's easy to get between the two cities. Here's how to get from Brisbane to Cairns.

Many direct flights operate between Brisbane and Cairns, taking around 2.5 hours. Flying is by far the quickest and easiest way of getting between the cities. In fact, it's the only way to leave Brisbane and arrive in Cairns on the same day!

Driving directly between Brisbane and Cairns would take about 20 hours, but it's not recommended that you do so all in one go. Spreading the trip out over several days, or even a few weeks, is much more comfortable. Many travelers like to drive around Australia (or, smaller sections of it) because there are many beautiful and interesting things to see between the main cities.

The most direct route between Brisbane and Cairns follows the Queensland coast most of the way, going via the Sunshine Coast, Mackay, the Whitsundays (or Airlie Beach, the mainland point of access), and Townsville.

Long-distance buses run along the coast of Queensland, and although it's a long trip, you can break it up as is advised for self-driving. You may need to transit in Noosa or Townsville anyway, depending on the service, so you might as well take your time with this journey.

Another slow option but one that is highly worthwhile if you have the time and the budget, the scenic Spirit of Queensland train runs between Brisbane and Cairns (and vice versa) several times a week. It's possible to get on or off at various points along the way (such as at Proserpine, for the Whitsunday Islands). Trains are spacious and comfortable, and have dining carts as well as some lie-flat berths are available.