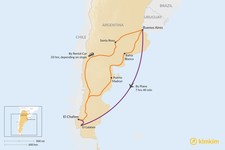 Buenos Aires and El Chaltén sit on opposite ends of the country, and there are two approaches you could take to cross the 1,670 miles (2690 km) between them.

To save time and take full advantage of the trekking trails and other activities El Chaltén has to offer, you should travel by plane to El Calafate, where buses and shuttles cover the final 137 miles (220 km) to the village. To see as much of the country as possible on your way south, consider renting a car and following a route like this self-drive itinerary between Buenos Aires and Patagonia, which features El Chaltén and the surrounding mountains and towns.

Taking a three hour, 15-minute flight from Aeroparque Jorge Newbury (AEP) or Ezeiza International Airport (EZE) in Buenos Aires to El Calafate Airport (FTE) in El Calafate is the most efficient travel option. Keep in mind Aeroparque is closer to the city center while Ezeiza is about 40 minutes outside the city. Once you land in El Calafate, the travel company Las Lengas offers shuttle transport directly from the airport to your accommodations in El Chaltén. The ride takes about three hours along smooth paved roads.

Otherwise, buses run by Chaltén Travel, Caltur, and Taqsa/Marga travel from El Calafate's Terminal de Omnibus on Calle Antoine de Saint Exsupery to the terminal in El Chaltén off of Calle Perito Moreno. In the summer months (December-February), each company offers several daily departures, and most slow down or stop during the winter months (May-August). You can take a taxi or private shuttle between the airport and the bus terminal, a trip that takes about 20 minutes.

Duration: 33 hours, depending on stops

The drive between Buenos Aires and El Chaltén takes at least a day and a half to complete but can become a destination in itself. If you follow the slightly faster route along RN3 and RN40, you can stop in the coastal cities Bahía Blanca or Puerto Madryn to take another look at the Atlantic Ocean or go off-route to nearby Peninsula Valdés to spot some penguins.

The second route stays on RN40 the entire time and takes you inland into La Pampa Province where you might stop in Santa Rosa, the capital, for a break. Both routes take you along the coast of Lago Viedma, the second largest lake in Argentina, on the final stretch into El Chaltén. Keep in mind the RN3 route has tolls, and driving may be trickier in the winter once you get into Patagonia.