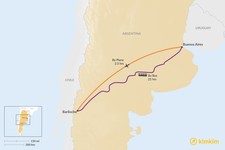 Argentine Patagonia is an enormous region that stretches from the Colorado River all the way down to the southern tip of the continent. The best way to reach Argentine Patagonia from Buenos Aires is to travel to San Carlos de Bariloche, 1,000 miles (1600 km) away, and use that as a jumping-off point to explore the rest of the region. Another option is to travel directly El Calafate (3 hours, 15 minutes) and nearby El Chaltén, or even straight down to Ushuaia (3.5 hours).

You can also fly directly south to El Calafate and stop in Bariloche on your way back to Buenos Aires, as this 11-day itinerary suggests, or spend some time trekking in Bariloche before continuing your journey.

Most flights from Buenos Aires to Bariloche depart from Aeroparque (AEP), which is located on the edge of Palermo and is only 3 miles away from the city center. You can easily reach Aeroparque by taxi or private transfer, or by taking the local 37, 45 and 160 buses.

Some flights depart from Ezeiza (EZE), which is 20 miles outside of the city. If you are going to Ezeiza make sure you book a transfer or taxi in advance. You can also take a Tienda León shuttle bus from Puerto Madero, which leave every 30 minutes. Local lowcost carriers jetSMART and FlyBondi fly to Bariloche from El Palomar Airport (EPA) in the suburbs of Buenos Aires. This airport is harder to reach and these airlines experience frequent delays, so this option is not recommended.

Once you arrive in Bariloche, you can take a taxi or rental car into the city, which is 25 minutes away.

Buses to Bariloche depart from Buenos Aires' Retiro station daily. Make sure to keep an eye on your belongings in and around Retiro⁠—the area is known for being unsafe, especially at night and in the early mornings. You can buy your bus ticket online or directly at the bus station, with options that range from reclining seats to full 180-degree sleeper beds, similar to first-class on an airplane.

The scenery on the last leg of the route is beautiful, but it is similar to what you can see around Bariloche, and doesn't make such a long bus ride worth it.

The spectacular Perito Moreno Glacier is one of the highlights of Los...
Getting Around Argentina