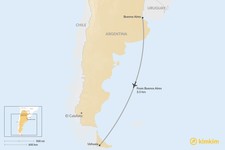 Ushuaia is known for being the southernmost city in the world, and is almost 2,000 miles (3,100 kilometers) away from Buenos Aires, Argentina's capital. Fortunately, traveling between these cities is easy thanks to several direct daily flights between the two.

This 12-day trip to Argentina's historic capital and then across Patagonia perfectly balances natural and cultural sightseeing, making it ideal for any adventurous traveler. You'll also experience the mesmerizing force of the Iguazú Falls and the spectacular glaciers of El Calafate.

Most flights for Ushuaia leave from Aeroparque, which is Buenos Aires' most centrally-located airport and is easily accessible by private transfer, taxi, and local bus. Both Aerolineas Argentinas and LATAM offer direct flights to Ushuaia, which take 3.5 hours. Some of the LATAM flights include a short 45-minute stop in El Calafate that doesn't require changing planes or disembarking.

A few flights also leave from Ezeiza Airport, which is located 20 miles away from the city center and takes at least an hour to reach by private car or taxi. Another option is to take the Tienda León shuttle buses, which leave every half hour from Puerto Madero. Plan extra time during rush hour, as traffic in Buenos Aires can be unpredictable.

If you arrive during the day, you'll get your first views of Tierra del Fuego's mountains and lakes during your landing. Once you've arrived at the "End of the World," as Ushuaia is sometimes called, you can take a taxi, private transfer or rental car into the city center, which is small and only 4 miles away from the airport.

S
Sidney D.
Ohio, United States
"My friend and I had an amazing time in Argentina! Emilce was an amazing contact for us as we planned our trip, and then once there we always had a local cont..." read more
Traveled to Argentina as a couple in June, 2022

Mary H.
Oregon, United States
"Our trip was amazing! Lucas did a great job tailoring the itinerary to our family's desire to be active on vacation with our 10 & 12 year olds. Maxi and Hern..." read more
Traveled to Argentina as a family in March, 2022
Create your custom-made trip to Argentina
Get Started