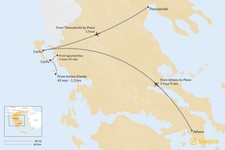 Before officially becoming part of Greece in 1864, Corfu had been ruled by the Venetian, French, and British, which explains its rich history and diverse cultural influence seen throughout the island. The city of Corfu's historic center has been deemed a UNESCO World Heritage Site, home to the Liston Arcade and the Palace of St. Michael and St. George, plus two Venetian fortresses.

Flying from Athens to Corfu is an efficient way to travel, with 1-hour direct flights taking off from the capital of Greece multiple times a day. You can also fly from the city of Thessaloniki, but there are fewer routes that get you in Corfu at a reasonable time.

If you happen to already be visiting the Ionian Islands, you can travel from Lefkada to the nearby airport and fly into Corfu in as little as 18 minutes. Taking a direct ferry from Paxi to Corfu is also another quick option, plus the most scenic of them all.

There are multiple kimkim guided tours that you can take advantage of, too, like this 6-day trip that starts in Thessaloniki and wraps up in Corfu, or this 11-day journey that takes you to an array of Greek islands.

Duration: 1 hour and 9 minutes (plus travel to/from airport and arriving 90 minutes before departure)

Direct flights head to Corfu from Athens daily, so you have options to choose from. It takes about 30 minutes to get to Athens Eleftherios Venizelos International Airport (ATH) from Athen's city center, which you can reach by taxi, private transfer, metro or bus. Take a nonstop flight to Corfu's Ioannis Kapodistrias International Airport (CFU) that gets you on the island in 1 hour and 9 minutes.

It's also worth noting that nearby countries have direct routes flying into Ioannis Kapodistrias, the closest being Bari, Italy, in addition to Paris, London and Munich.

Flying direct from Thessaloniki to Corfu takes about the same amount of time as traveling from Athens. The only reason Athens might be a better option is that there are more routes headed to Corfu every day, but Thessaloniki is also a quick and reliable choice. Take the 45-minute shuttle from Thessaloniki's city center to Thessaloniki Airport Makedonia (SKG), where you can take a direct flight to Ioannis Kapodistrias International Airport that gets you there in as little as 1 hour flat.

Duration: 45 minutes to 1.5 hours (depending on where you're traveling from)

You can take a direct ferry from the city of Paxos in Paxi—the smallest island group of the Ionian Islands—to Corfu in 1 hour and 30 minutes. Kamelia Lines operate their ferries departing for Corfu at three separate times each day: 8 a.m., 10:30 a.m., and 6 p.m. No tickets can be purchased on the boat, so you must buy your ticket in advance by purchasing one at the Port in Gaios or emailing Kamelina Lines. Paxi is the only Ionian island where you can take a direct ferry to Corfu.

For those who prefer air travel, take a short 25-minute bus from Lefkada to Aktion Airport and fly directly to Ioannis Kapodistrias International Airport from there. The duration of a flight can take as little as 18 minutes (not factoring in travel time to/from the airport and 90-minute arrival before departure), but make sure to check the flight schedule as direct routes are only on select days.

From wherever you are in Greece, you can drive to the coastal city of Igoumenitsa and take the ferry from there. Ferries that are operated by Corfu Ferries run every three hours, and the entire duration is 1 hour and 45 minutes. Keep in mind that this ferry company only operate Tuesdays through Fridays. You can email the company to book in advance.

Enjoy an unforgettable journey through the varied landscapes of northern...

Visit some of Greece's beautiful lesser-known regions on this 9-day...

These three Greek islands will give you a hands-on experience of...

Spend eight days trekking through the northern Greek mountains and...

Make your way across the middle of Greece with this two-week itinerary....