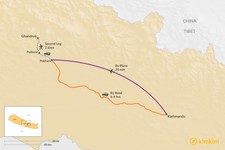 The Gurung town of Ghandruk is a fixture on many Annapurna-region treks, including the eponymous Ghandruk Trek. Getting there from Kathmandu first requires flying or taking a private vehicle/bus to Pokhara, and then taking a private vehicle and trekking the rest of the way. This will take at least a couple of days, as it's not possible to get all the way from Kathmandu to Ghandruk in a single day.

Flying is the most recommendable way of getting between Kathmandu and Pokhara, as it's quickest, easiest, and most comfortable. Flights leave from Tribhuvan Airport's domestic terminal, several times a day. The last flight leaves around mid-afternoon, but it's best to try to get on the earliest flight of the day, because if there are delays, re-bookings are done in the order of the original flight. If you're booked onto an afternoon flight and all morning flights are delayed, the knock-on effect means you may not end up flying until the next day.

Flights only take around 30 minutes, although they are frequently delayed because of the weather. Try to sit on the right-hand side of the plane for the best mountain views.

In Pokhara, the small Pokhara Airport is just a couple of miles from Lakeside. It's easy to get a taxi into town, or arrange for a hotel pickup (check out this article for places to stay in Pokhara).

Hiring a private driver is the most comfortable and convenient way of making the overland journey, and foreigners are not allowed to hire cars for self-driving in Nepal. Hiring a car and driver means you can stop when and where you like, plus you can leave at any time of day (tourist buses tend to leave early in the morning).

Taking the bus is the scenic option, and worthwhile if you're on a tight budget and not short on time. You'll follow the Prithvi Highway, which connects Kathmandu and Pokhara. It runs almost parallel to the Trisuli River for the first half of the journey, and the mighty Himalaya come closer into view on the second half. However, because of road and traffic conditions, it can be slow and physically tiring. When there are no road delays, an overland journey can take as few as six hours, but this is uncommon. It can often take as many as nine.

Tourist buses are cheaper and reasonably comfortable: they're more expensive than local buses, but much safer. Most tourist buses leave from near Thamel around 7 am, and arrive at Pokhara's tourist bus park, not far from Lakeside. Pre-book tickets during busy times, or if you're traveling in a large group. The luxurious Greenline Bus is the most comfortable—tickets include a buffet lunch, and comfort stops are of a higher caliber.

Local buses are cheap but generally uncomfortable and not very safe--overcrowding and speeding should be expected. They're only really an option if you're on a very tight budget, or need the flexibility of leaving Kathmandu later in the day.

If you're flying from Kathmandu and Pokhara early in the morning and everything runs on time, it would be possible to get from Kathmandu to Pothana on day one, and then continuing to Ghandruk on day two. However, unless you're in a real hurry, a more leisurely itinerary that includes at least one night in Pokhara is recommended. There's plenty to enjoy in Pokhara, and this is a less tiring option.

By Private Transfer & On Foot

There's more than one way of reaching Ghandruk from Pokhara, and depending on your trekking itinerary, you won't necessarily be taking the most direct route (for example, this 7-day Ghandruk trekking itinerary takes three days to get from Pokhara to Ghandruk as it makes overnight stops at other places en route). But, for the sake of this article, we're assuming you'll be wanting to get from Pokhara to Ghandruk at a comfortable pace that allows you to enjoy the journey, but without rushing.

From Pokhara, take a private vehicle west along the Pokhara-Baglung Rajmarg Road. Many trekkers setting off for treks in the Annapurna Himalaya ply this well-developed road. It's also possible to take a local bus, but these are not very comfortable (or safe) and take much longer than a private vehicle. Continue along this road for about an hour until you reach the turn-off to Dhampus. You'll leave the road behind here.

Continue by foot, hiking through Dhampus and the Australian Camp until you reach the small village of Pothana, which should take around four hours. The trail passes through some forests and past cultivated land, and is uphill in parts. Stay overnight in Pothana.

On day two, continue trekking towards Ghandruk. You'll pass through the villages of Deurali, Tolkha, and Landruk. The trail ascends and descends, and is steep in parts, but is more gradual after Landruk.

Both Lukla and Namche Bazaar are essential stops on the Everest Base...
Getting Around Nepal