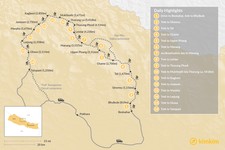 One of the classic treks in Nepal, this popular route takes you all the way from subtropical jungle to high-altitude plateau, culminating in Thorung La at 5,419 m.

Known as one of the most diverse treks in Nepal, the Annapurna Circuit ascends 4,622 m before dropping down onto a high-altitude plateau that takes you south along the Kali Gandkhi river valley. Road construction has changed the nature of this trek over the years (pushing as far north as Muktinath in the west and Manang in the east), but it still remains a beautiful trek that can be done in many different ways - from a short 9-day itinerary to a month-long journey around the entire Annapurna massif.

From Pokhara, you'll take either private jeep or public transport to Besisahar, from where you officially start your trek.

Generally, the best (and busiest) time to trek the Annapurna Circuit is the spring and the fall, although a shortened itinerary (focusing on the northern, drier region of the circuit) is a great option during the monsoon. It's only during the winter that causes issues as Thorung La pass if often closed due to snow.

The safest direction to complete this trek is counter-clockwise, which allows for gradual acclimatization as you make your way toward Thorung La. Traditionally, the route starts in Besisahar and ends in Tatopani, but road construction has opened up a number of options at both the beginning and end of your trek.

Over the past few years, road construction has made much of the western and eastern sections of the Annapurna Circuit accessible by bus and jeep. The roads are bumpy dirt tracks, at best, but many trekkers now opt for a shorter version of this trek by starting farther up the valley (3-4 days into the traditional route) and ending even as early as Jomsom (then taking a bus to Beni or flying to Pokhara).

If you're trekking in the Annapurna region, you'll need to purchase a TIMS card ($10) and an Annapurna Conservation Area Permit (ACAP) ($20 USD) before you go. There will be multiple checkpoints along the way where you'll need to show these.

As with other treks in Nepal, teahouses are available along the entire Annapurna Circuit, and all your meals, snacks and water can be purchased along the way.

Variations to this trek

There are a variety of ways to do this trek, a few of which are listed below.

Given the road construction, this trek can now be done is as few as 8-9 days by starting as far north as Manang (3,520 m) and ending as early as Muktinath. If you decide to shave off the initial days of the trek, be sure to follow a proper acclimatization schedule before you attempt to cross Thorung La pass.

From Tatopani (Day 18), you can continue east by following the local village trails along the Ghorepani trekking route, to Ghandruk, and finally ending in Nayapul from where you can take a jeep or bus back to Pokhara. This adds an extra 4-5 days onto your trek. If time is not an issue, you can even consider continuing farther to Annapurna Base Camp.

These two remote valleys of the Annapurna region are a great way to experience a desert-like landscape of Upper Mustang without paying for the $500 permit. From Kota Uppar (Day 5 of the Annapurna Circuit), branch north up the valley toward the villages of Nar and Phu. It's possible to complete a small circuit and link back up to the Annapurna Circuit by crossing the Kang La (5,300 m) and re-connecting at Humde.

One of the classic treks in Nepal, this popular route takes you all the...

This 20-day itinerary guides you along the legendary Three Passes...

Pokhara and Lumbini are two of the most popular travel destinations in...
Getting Around Nepal

Julian O.
United Kingdom
"Simply amazing. Awesome flexibility on planning before departed. Amazing guides. Logistics went like clockwork, even when we decided to change plans on a day..." read more
Traveled to Nepal as a couple in November, 2022
T
Tim C.
California, United States
"Raj and Bipin organized an 11 day trek to Langtang and Gosaikunda for me. Raj was responsive and patient as he worked with my preferences and scheduling cons..." read more
Traveled to Nepal solo in October, 2022

Joan P.
Spain
"My trip to Nepal was great. Sherpa Ngima was all the time ofering me all I needed douring my stay there. He was very friendly and profesional. He's a reliab..." read more
Traveled to Nepal solo in November, 2022

Anna R.
United Kingdom
"Amanda was fantastic in helping us identify a trek that met all of our requirements, and answering our many questions. The briefing meeting after we arrived ..." read more
Traveled to Nepal as a couple in October, 2022
L
Linda S.
Connecticut, United States
"Many thanks to KimKim for Raj of Social Tours (Nepal) & Sherab of Bhutan Travel Club & their addressing all of the details of this glorious trip. Leki Tsheri..." read more
Traveled to Nepal solo in October, 2022

Anita S.
Texas, United States
"Ngima and his team did an outstanding job from the planning stages all the way. Ngima was very prompt in responding to all my queries and helped us plan our ..." read more
Traveled to Nepal as a couple in October, 2022

David M.
North Carolina, United States
"Thank you for reaching out and asking about our trip. It exceeded all of our expectations! First, Kimkim and Himalayan Trails executed everything perfectly. ..." read more
Traveled to Nepal as a family in October, 2022
V
Vinitha S.
Texas, United States
"Raj planned a 11 day trip to Nepal for us. During the planning stages he provided quick and very detailed responses to our questions and also made himself av..." read more
Traveled to Nepal as a couple in October, 2022

Charlie H.
Nevada, United States
"We had an AMAZING trip with Sherpa Wangchhu and our porter, Nima, on the Tamang Heritage Trail. It was a true pleasure to stay with locals in towns like Tato..." read more
Traveled to Nepal as a couple in October, 2022
Create your custom-made trip to Nepal
Get Started