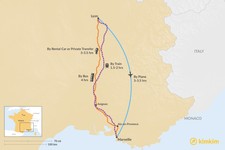 Marseille, France’s second-largest city and capital of the Côte d’Azur, sits 175 miles (282 km) south of Lyon on the Mediterranean coast. Travel between the cities is straightforward and direct, with international airports, high-speed train links, and a major autoroute linking them.

The direct TGV train is the quickest way to make the journey, arriving in Marseille in under two hours. Driving south, whether by rental car or private transfer, takes about three hours, and offers more flexibility to explore the countryside of the Rhône Valley and Provence. In-depth suggestions for touring the cities and surrounding countryside by car can be found in our eight and 12-day itineraries.

Direct flights between Lyon and Marseille take under an hour, but require multiple steps and transfers, making the overall trip time at least three hours. The bus is the slowest method of travel, but also the most economical, reaching Marseille in about four hours.

The train is by far the fastest and easiest way to reach Marseille from Lyon. Hourly direct TGV Ouigo express trains leave Gare de Lyon Part-Dieu and arrive at Marseille Saint-Charles in under 2 hours.

For those transferring from Lyon Saint-Exupéry (LYS) airport, OuiGo trains leave from the airport’s Saint-Exupéry station and reach Marseille Saint-Charles in 1.5 hours, twice a day.

TGV and most high-speed train tickets should be booked ahead online for the best prices and availability.

The fastest driving route from Lyon to Marseille is extremely straightforward, following the major A7 toll autoroute from door-to-door in about 3 hours. Self-driving also allows travelers to explore more of the Rhône Valley and Provence by taking detours and stopovers along the way.

Highlights along and near the route include the Roman ruins of Vaison-la-Romaine, the village and vineyards of Châteauneuf-du-Pape, and the Provençal cities of Avignon and Aix-en-Provence.

Upon arrival in Marseille, drivers should avoid the narrow, one-way streets of the center and opt for paid parking lots — Vieux Port and Estienne d’Orves are good options near the Old Port.

For those looking to travel in comfort, a more expensive option is a private transfer, which takes all the stress out of driving and offers the option for direct service or a guided itinerary.

The bus is one of the slowest options, but also the most economical. Multiple carriers cover the route from Lyon to Marseille, but FlixBus offers the fastest direct trip at about 4 hours. Buses leave from Lyon’s Perrache station to the south of the Presqu’île and arrive at Marseille’s central Saint-Charles station.

The flight time between Lyon and Marseille is just 55 minutes, but with additional transport to and from airports, as well as standard pre-boarding times, it’s a slower and more expensive way to make the trip.

Upon arrival, the easiest way to reach Marseille from the airport is via the Navette Marseilles Aeroport (Line 91) shuttle bus which departs every 10 minutes and reaches the central Saint-Charles station in 25 minutes.

Discover the best of the culture and art in the French Riviera and...