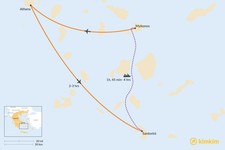 Mykonos and Santorini are less than 100 miles apart in the Aegean Sea, separated by a cluster of other Cyclades Islands. Taking a ferry is the most convenient and affordable option to travel between them. There are two types of ferries: somewhat more expensive "fast ferries," which take about 2.5 hours and are more susceptible to weather delays, and "slow ferries" which take about 4 hours on more indirect routes (but are very scenic).

Flying between Mykonos and Santorini is possible but impractical—there are no direct flights between islands.

Santorini has two ports, but Athinios Port is the one for passenger ferries. There are three ferry operators offering high-speed service: Minoan Lines, Blue Star Ferries, and Seajets. The faster you want to get there, the more expensive it will be. Seajets offers some sailings under good weather conditions for under 2 hours. For most sailings, expect to travel 2 hours and 30 minutes.

Direct routes are available multiple times a day during peak season (April-October),  as early as before 10 a.m. and as late as 6:35 p.m. The indirect service is more budget-friendly but can take up to 4 hours. Some travelers actually prefer this because it means basking in the views of other islands along the way when the ferry makes those connections.

Tickets can be purchased in advance; it’s wise to get them weeks in advance as they tend to sell out the day of sailing. You have to pick up the physical tickets at the agencies by the port, where you will encounter crowds of tourists.

All flights between Mykonos and Santorini have a stopover in Athens. The shortest layover time is 45 minutes, but it can be longer. You won’t save much in terms of time—the duration is similar to sailing on a direct route. There are a couple of airlines that fly year-round, and more frequently during summer months (about 4-5 times daily). Flights depart from Mykonos Airport (JMK), which is a 10-minute taxi ride from Chora, and arrive at Santorini Airport (JTR) in Thira.

Chania and Heraklion are two cities located on the northern coast of...

As one of the quieter Cyclades islands, Paros is a perfect complement to...
Getting Around Greece

Head to Greece for 14 days of relaxation. Start with a culinary tour and...

J
Jo W.
California, United States
"This is the first time using kimkim, and I was super happy about everything they planed it for us. I've never been to Greece before, and I was determined to ..." read more
Traveled to Greece as a couple in September, 2021

Patrice V.
Missouri, United States
"Harris was wonderful to work with and designed a trip that exceeded our expectations. Our activities were fun with great friendly guides, our accommodations ..." read more
Traveled to Greece as a group in September, 2021

Mary C.
Missouri, United States
"Working with Harris was an absolute delight. I have to admit I was a little nervous using Kimkim, you hear about all of these internet scams, but I forged ah..." read more
Traveled to Greece as a group in September, 2021
C
Carla W.
Texas, United States
"What an amazing trip and an awesome service kimkim provides! Everything went so smoothly for our 8-night trip to Athens, Naxos, and Santorini. The hotels w..." read more
Traveled to Greece as a couple in August, 2021

Natalya R.
Massachusetts, United States
"Maria was very helpful and knowledgeable when we were planning our trip to Greece. Greece has endless destinations! Maria helped me to pick 3 islands base o..." read more
Traveled to Greece solo in September, 2021
J
Jeff P.
Arizona, United States
"We thought KimKim and Tasos were great!! Tasos planned all aspects of our Greece trip (including a sailboat charter, numerous excursions, car rental and b..." read more
Traveled to Greece as a group in September, 2021