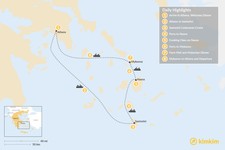 Escape the troubles of the world with eight days in the Cyclades. You'll arrive in Athens, then head to the islands to explore famous Mykonos and Santorini as well as lesser-known but spectacular Naxos. Enjoy your Greek vacation filled with sun, sailing, and sampling, with cooking classes and traditional dinners accompanying your days of blissful idleness.

After breakfast at your hotel, you'll get an early flight or ferry to Santorini. Nothing says "good morning" like watching the sun coming up over the island's iconic cubic architecture. Upon arrival, you'll take in the island's central caldera—the site of one of the largest volcanic eruptions in history—rising above you.

The island's volcanic history has led to the formation of some of the more unique beaches in the Greek islands, along with the dramatic cliff views on the island's caldera side. Spend your day relaxing at the beach or catching some exercise—and even more views—from one of Santorini’s more than 12 scenic walking routes, ranging from between two to eight miles each.  At dinner, sample the island's signature cherry tomatoes and white eggplants as guest stars in seafood dishes or the main event.

Enjoy a leisurely morning breakfast before taking some time to stroll and scope out small shops and boutiques. Explore Fira, the capital of the island, which offers plenty to check out. History buffs will be delighted by proximity to the Archaeological Museum of Santorini, the Museum of Prehistoric Thera, the Folklore Museum of Emmanuel Lignos, and the church of Hypapante.

As the late afternoon unfolds, you'll head toward Vlychada Port to board your semi-private catamaran cruise around the island. Your first stop will be at the Red Beach to swim and sun, followed by a second stop at the White Beach to take in all the distinctive-colored sands of Santorini.

Barbecue will be served onboard while you sail past landmarks at Aspronisi, the Ancient Lighthouse, Indian Rock, and the prehistoric city at Akrotiri, hidden away at the southern tip of Santorini. These ruins are the site of some of the Bronze Age’s most advanced settlements, which prospered for centuries before being destroyed by a great volcanic eruption in the mid-second millennium BC. Top it off with a jump into the hot springs at Nea Kameni, where the mineral-rich volcanic waters are believed to have therapeutic properties.

Take a leisurely morning after breakfast, adding more shopping or time in the sun to your itinerary. At your choice of time in the afternoon, you'll head to Kaloxylos village to learn how to prepare a typical Greek meal in a local home. Join in the village life, with a menu that you can help determine based on your personal preferences, season, and what's growing in the village garden.

At sunset, head to the Portara if you haven't yet. The unfinished entrance to the Temple of Apollo on an islet outside of town is one of the island's best views as the sun goes down.

You'll take a ferry in the morning to Mykonos, one of the most famous islands in the Cyclades. Known for its glitzy restaurants and nightlife, art scene, and jet set crowds (it was recently home to a Gucci pop-up boutique), Mykonos is one of the most quintessential Greek isles.

Your first day's itinerary is up to you. You'll receive a personalized list of tips for exploration, but some highlights include:

The morning is yours to explore, so head to a beach to lounge or stroll through the cosmopolitan streets, scoping out the boutiques that draw the island's stylish crowd season after season.

In the afternoon, you'll pay a visit to a traditional farm. Talk to the farm's caretakers to learn about how vegetables are grown on the islands and how the livestock are raised, and even say hi to the animals.

As the sun begins to set, you'll sit down to a traditional dinner. You'll be welcomed into a local Mykonian household for the meal, where you'll experience the traditional Greek way of life, culture, and cooking. Hear all about their stories of the island's culture and history as well as their own family history, over authentic dishes and free-flowing local wine (for the older crowd).

Day 8: Mykonos to Athens and Depart

Savor one more scoop of yogurt before you have to say goodbye to Greece. Catch a flight from the airport or ferry back to Athens for your departure. 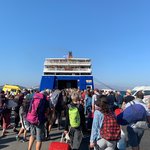 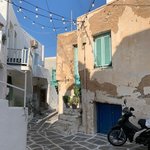 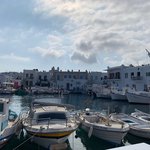 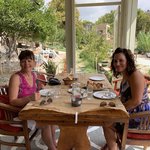 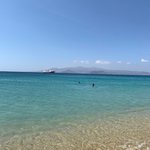 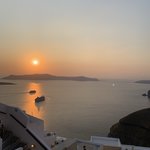 Hit three major hotspots on this active eight-day tour of some of...

Santorini is always a good idea, whether you are visiting in fall or...
Best of Santorini

Getting Off the Beaten Path in Mykonos

Greece is an outdoor haven perfect for an active trip. With mountains...
Best of Mykonos