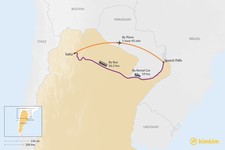 To get from Salta, a historic city in the northwest corner of Argentina, to Iguazú Falls, a mile-long system of waterfalls in the northeast corner of the country, you must travel more than 900 miles (1,440 km).

The most efficient option is to catch a flight from Salta to Puerto Iguazú, especially if you plan carefully and book a direct flight. Otherwise, you may decide to travel overland. In that case, a rental car will be your best choice, since buses, though comfortable, take over 26 hours to cover the same distance.

Direct flights from Martín Miguel de Güemes International Airport (SLA) in Salta to Cataracas Iguazú International Airport (IGR) take about one hour and 45 minutes but are only available from Aerolineas Argentinas on Mondays, Wednesdays, and Fridays. Flights with layovers are available from Aerolineas Argentinas, LATAM, Norwegian Air, and budget airline JetSmart throughout the week. These flights typically include a short layover in Buenos Aires' Aeroparque (AER) and take between four and seven hours, so they're still your fastest option.

Duration: 18 hours, 40 minutes, depending on route and stops

When it comes to traveling in northern Argentina, a rental car is often a popular choice. The fastest route, via RN16 and RN12, takes you past several stops you would miss via plane, like Parque Nacional Iberá in Misiones Province or Resistencia, the capital of Chaco Province. To fit in more sightseeing, consider the slightly longer route via RN81, which takes you through Jujuy and Formosa Province as well as Paraguay, giving you the option to stop in the capital Asunción.

Though they follow a similar route to rental cars and tend to be relatively comfortable, buses are not the best way to get between Salta and Iguazú Falls. Since they stop to pick up passengers, buses take several hours more than a rental car to go the same distance and don't offer the same opportunities for sightseeing along the way.