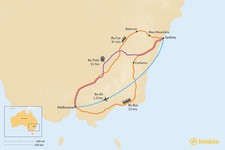 Australia's two biggest cities, Sydney and Melbourne, look quite close together on the map, both being in the south-east of the huge country. But, there's still 545 miles (877 km) between them. Here's how to get from Sydney to Melbourne.

Flying is by far the quickest and easiest way of getting from Sydney to Melbourne. Multiple airlines make the direct trip every day. If you're short on time or just don't want to make the overland trip, flying is the best option.

If driving directly between Sydney and Melbourne, the trip will take about nine hours. But, it's a good idea to break the journey up over at least a couple of days, as there are interesting things to see along the way, and various routes.

The slightly longer route goes west from Sydney and through the Blue Mountains, which are worth at least a day's exploration, before heading south at Bathurst. Traveling south-west from Sydney you could go via the little bush capital that Australians love to hate, Canberra.

There are also lots of national parks between Sydney and Melbourne that would require some slight detours, but nature-loving travelers may find these worth going out of their way for. These include the Namadgi National Park, Kosciuszko National Park, Alpine National Park, and the Snowy Ranges. This part of the country is home to the tallest mountains in Australia (which, admittedly, are not very tall by global standards! Mount Kosciuszko is 7310 feet/2228 m.)

Two trains run each day between Sydney and Melbourne, one in the morning and one in the evening (an overnight service). They leave from Sydney Central Station and arrive at Melbourne's Southern Cross Station, both right in the middle of their respective cities. Various ticket classes are available, from economy seats to first-class berths. There are on-board snack bars.

Taking the train is the best option if you don't want to fly or drive yourself.

Several buses run between Sydney and Melbourne each day, usually going via Canberra. Most are night services, leaving Sydney's Central Station in the early evening and arriving in Melbourne in the early morning.

Although buses are reasonably comfortable, often have on-board toilets, and make scheduled toilet and meal stops, they're not the best option. Taking the bus is only a little cheaper than flying, takes longer than the train and is much less comfortable.

On this five-day, self-drive trip, explore the coastal capital city of...

On this two-week, self-drive journey through Australia, visit two major...