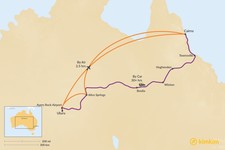 Uluru, in the south-west of the Northern Territory, and Cairns, in the far north of Queensland, are an enormous 1600 miles (2600 km) apart. Considering the distance, the easiest way of getting from Uluru to Cairns is to fly, but you can also drive. Here's what you need to know.

Although both Uluru and Cairns are small towns, they're both very popular tourist destinations, so it's possible to fly directly between them. The airport serving Uluru is called Ayers Rock Airport (also called Connellan Airport), which is near Yulara, a short drive from Uluru. Availability of direct flights is limited, especially at busy times, so you may need to take a flight that transits elsewhere, such as Alice Springs, Sydney, or Brisbane. Doing so will add several hours to your journey, but even an indirect flight from Uluru to Cairns is quicker than any other mode of transport!

Travelers up for a serious Australian outback adventure might like to drive between Uluru and Cairns. If done in one go, the journey takes about 30 hours, but this is highly inadvisable. Breaking the journey up over several days will allow you to stop and seeing many interesting things along the way, and to really appreciate the Northern Territory and Queensland outback.

There are various possible routes, but given the inhospitable nature of much of the outback, it's a good idea to stick to the more beaten path. From Uluru, head east to Ghan, and then north to Alice Springs. Alice is about a five-hour drive from Uluru, so is an ideal place to first break the journey. It's worth at least a couple of days of exploration. Continue east into Queensland, passing through small mining and farming communities like Boulia, Winton, and Hughenden. You'll meet the coast at Townsville, which is about 4.5 hours south of Cairns.

Although the road between Uluru and Cairns is relatively well-travelled for an outback road, it's always a good idea to carry emergency supplies when driving through rural Australia, including plenty of water and a spare tire.