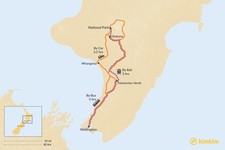 The Tongariro National Park is about 180 miles (290 km) north of Wellington, in the central North Island. It's easy to reach by road or rail. Here's how to get there.

Many travelers to New Zealand like the convenience of having their own car, and driving between Wellington and the Tongariro National Park is the easiest way.

The fastest and most direct route is to travel the whole way on State Highway (SH) 1, but it's also possible to go via Palmerston North (detour through SH 56 or 57) or Whanganui (via SH 3 and 4). Once you've reached the Tongariro area, you can either turn west onto SH 49 to reach the small town of Ohakune, or continue along the Desert Road (SH 1) that skirts the east of the park.

If you don't have your own car you can also take a long-distance bus. To get from Wellington to the towns of Ohakune or National Park, on the edge of the Tongariro National Park, you may have to go via Palmerston North and change buses there. This is a slightly more round-about way of getting between the two places, but taking the bus means you can enjoy the views without having to worry about driving. Buses make scheduled toilet and meal stops.

The Northern Explorer train runs between Wellington and Auckland three times per week, stopping in Ohakune and National Park en route. This is a popular option with travelers, as it's a slow but scenic way to travel through the middle of the North Island. Trains are more comfortable than buses as you can get up and move about. They're equipped with bathrooms, a dining car, and an open-air viewing car.

How to Get from Auckland to Christchurch

Auckland and Christchurch are about 620 miles (1000 kms) apart. They're...
Getting Around New Zealand