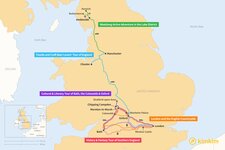 With one week in England, you can take a trip to up to four different destinations, split time between two or three, or even dedicate all of your travels to an adventure in one area, like the stunning Lake District. Or, travel to a mix of famed cities, including London and Manchester, and countryside destinations to explore Oxfordshire, the Cotswolds, and Bath. There's plenty to discover, from literary itineraries to foodie and beer tours.

Itinerary #1: London and the English Countryside

Begin this city-to-countryside trip by experiencing the full history of London. Then, take the journey into the countryside to capture gorgeous photos of scenic landscapes during your seven-day stay.

Touch down in England's capital, take a private transfer to your hotel, and get ready to explore one of the most iconic cities in the world. Use the first two days to take in famous landmarks, including Westminster Abbey, St. Paul's Cathedral, and Piccadilly Circus. Then, embark on a private tour of the ancient city of Bath, complete with its Roman-inspired baths, statues, and temples.

Step into the royals' shoes on day four with a trip to Windsor Castle—a 1,000-room palace that has housed many kings and queens. Next, transfer to the Cotswolds for a scenic tour of its charming villages. Day six takes you to Oxfordshire for a guided tour of Blenheim Palace and its historic tapestries, portraits, and antique furniture, before this fulfilling trip comes to an end. Learn more

Take your appreciation for the arts to a new level with a literary-inspired trip that includes tours of William Shakespeare's hometown, a staple university, a collective of charming villages, and more.

After arriving in London, board the train to Bath—the city's famed author Jane Austen called home for five years. A guided tour includes stops at popular attractions like the Roman Baths, the Pump Room, and Sydney Gardens. Day two is about discovering the stunning Georgian architecture as you visit filming locations from the hit Netflix series "Bridgerton." Then, venture out of the city for a hike on the Cotswolds Discovery Trail, which takes you from a village on the River Coln to the rolling hills of Painswick Beacon.

Day four includes another tour of a literary legend's former home. Explore the River Avon, Guild Chapel, and Holy Trinity Church as you make your way around Shakespeare's former residence. Next, prepare to be mesmerized by Hidcote Manor and its maze of pathways and secret gardens adorned with exotic plants. A trip to the Unversity of Oxford invites you to step into the mind of J.K. Rowling to see what inspired the "Harry Potter" series. Additionally, explore the Bodleian Library and go on a boating tour of River Cherwell before your trip concludes on day seven. Learn more

If you're fascinated by fantasy, this historical vacation will transport you back to medieval times. From touring a Roman town to the hallowed halls of an age-old college, learn all about the rich history of Southern England.

Land in London and head west on a train to Bath for two days of exploration. During your time in this Roman-inspired city, learn more about the nuances of the women in Regency-era England and the history of buildings and locations that have appeared in fictional shows. Day three brings you from Bath to a bed-and-breakfast in the idyllic market town of Moreton-in-Marsh.

After a night of rest, get an up-close-and-personal look at birds of prey at the Cotswold Falconry Centre. There's no shortage of sights to see on a jam-packed day five, including stops at Hidcote Gardens and Oxford's Divinity School, which served as a shooting location for the "Harry Potter" series. The final day features a tour of the second-largest library in Europe and a boat trip complete with a picnic lunch. Then, board the train back to London to fly home. Learn more

Adventure seekers will revel in a week of exciting activities on this action-packed trip anchored in the Lake District. From stand-up paddleboarding to a unique biking experience, experience England from a variety of breathtaking perspectives.

Upon arrival, make your way from Manchester to Ambleside, and waste no time kicking off a week of engaging activities. Your first excursion is a canoe trip along an easy-to-navigate route full of hills, mountains, and stunning scenery. Day two brings a walk to Buttermere before a full-day electric bike trip in Keswick.

Day four sends you on an immersive experience to learn about the life and times of Beatrix Potter. Then, return to nature for more unforgettable action: a canyoning excursion and a stand-up paddleboarding tour. On the final day of your trip, the Manchester United Museum & Stadium Tour offers a behind-the-scenes glimpse of one of the world's most successful football clubs before heading home. Learn more

Pack your appetite for a tasty weeklong tour that spotlights England's best bites and beers. From high tea to an eight-stop food tour, there are plenty of delicious nooks along the way!

Start your seven-day eating adventure with The Savoy Hotel's world-famous afternoon tea. Following your fill of classic sandwiches and homemade scones, take in London's skylines and watch a movie at the open-air Rooftop Film Club. Day two begins with the Hidden Gems Food Tour that spans from Tower Bridge to Borough Market. Then, learn more about the murders and mysteries connected to the Tower of London on the Villains of London Evening E-Scooter Tour.

On day three, transfer to Oxford to see the famous Botanic Gardens and the fields of Magdalen College School during a punting tour on the River Cherwell. Next, there's another opportunity to sample delectable teas and pastries during your visit to Blenheim Palace, followed by day five's educational craft beer tasting at Chester Brewhouse & Kitchen. Then, a foodie-focused day six includes the Eat the City Tour in Manchester to sample and learn more about local eats and how food has inspired the city's history. Your brain and belly will be more than satisfied by the time you board your return flight. Learn more

Looking for more inspiration for your trip to England? Check out these other 1-week England itineraries, with outdoor adventures, countryside trips, and food and drink tours to hit the highlights.

If you're a Shakespeare lover, a Jane Austen enthusiast, or a Harry...

Get ready for a week of adventures as you tour fascinating historical...
England 7-Day Tours & Itineraries