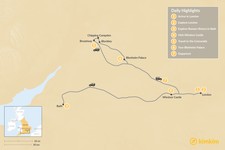 On this week-long itinerary, you'll immerse yourself in the cosmopolitan atmosphere of London, visiting Big Ben, Trafalgar Square, the Tower of London, and much more. Then venture out into England's fertile green countryside, which boasts some of the most scenic landscapes in all of Europe. It's the perfect mix of city and country life, allowing you to enjoy culture and excitement as well as rest and relaxation.

Welcome to the capital of England! With its nightlife, culture, history, and world-class dining scene, London is the perfect place to kick off your UK vacay. You'll arrive in style, too, with a private transfer from the airport to your hotel in central London. Likely you'll be a bit jet-lagged from your flight, but the perfect remedy for that is to get out and explore! Hit the streets on a double-decker bus, in a black cab, or even on foot.

In a relatively short amount of time, you can visit any number of iconic city sights. There's a host of parks, historic buildings, museums, promenades, bridges, and plazas, such as Trafalgar Square and Piccadilly Circus. Wherever you decide to go, know that in this city, there's fun and excitement to be had around every corner.

Today, you'll visit some of London's most famous palaces, castles, and cathedrals on a luxury driving tour of the city. This, of course, includes a stop at Buckingham Palace (exterior only) as well as Westminster Abbey and St. Paul’s Cathedral, where Princess Diana married Prince Charles in 1981. We can also tailor the itinerary to suit your specific interests so you can visit the locales that appeal to you. It's the most personalized way to see the royal and religious landmarks that have been an integral part of Britain's heritage from antiquity through to present day.

After breakfast, you'll embark on another tour. This time you're off to the city of Bath, located in Somerset County in southwest England. The city is surrounded by rolling green hills and is best known for its natural hot springs and 18th-century Georgian architecture.

However, Bath's earliest roots are steeped in Roman tradition, as here you'll find Roman-era baths, statues, and temples. As a part of this private tour, which includes a high-speed, one-hour train transfer from London, you will enjoy all the Roman and Georgian heritage that earned Bath a UNESCO World Heritage designation. This includes Bath Abbey, the 18th-century Royal Crescent network of terraced homes and the aforementioned Roman baths.

Today you will travel to Windsor Castle, located on the outskirts of London. Sitting on 13 acres of well-manicured grounds and boasting a whopping 1,000 rooms, this 11th century castle/palace is an architectural marvel of Georgian and Victorian design. It's been a royal residence dating back to every monarch since Henry Ist and was, in fact, a favorite stay for Henry VII.  More recently, the castle hosted the 2018 Royal Wedding of The Duke and Duchess of Sussex, better known to us commoners as Prince Harry and Meghan Markle.

On a tour of the castle, you'll see royal portraits depicting those famous monarchs from the House of Tudor, as well as many other highlights. These include the royal wedding exhibition, State Apartments, and St. George's Chapel. The latter is an impressive example of a medieval Gothic architectural style and has hosted many royal marriages, notably from the reign of Queen Victoria and later.  You'll also be able to stroll all those acres of glorious English gardens surrounding the property.

Day 5: Travel to the Cotswolds

In the morning, we will whisk you by private car service to the Cotswolds, a region located in the southeast of England. Any anglophile should fall instantly in love with the Cotswolds, as it's an area seemingly lost in time and featuring throwback villages, market towns, country cottages, ancient chapels, old stone almshouses, and stately manor homes. Equally impressive is that all of these are nestled amid the hedgerows and rolling green hills that define the English countryside.

In the afternoon you will enjoy a scenic tour of the most charming villages of this region, including Broadway, Chipping Campden, Blockley, and Dover's Hill. As you tour the area, your guide will educate you about the history of these towns and the region where they're located. This history is a rich one, as it goes all the way back to Ancient Rome, and there are still Roman ruins in the Cotswolds today.

Today we will take you to Oxfordshire, in southeast England, where you'll enjoy a guided tour of Blenheim Palace, a magnificent country residence with over 300 years of history. It was built in 1704 and gifted by Queen Anne to the great British general, the Ist Duke of Marlborough. As well as being the current home of the 12th Duke of Marlborough, it is also the birthplace of England's most famous prime minister, Winston Churchill (1874-1955). It's a UNESCO World Heritage Site featuring 187 rooms in a property sitting on 2,000 expansive acres, and it's the only non-royal palace in England.

On a guided tour of the palace, you'll learn its fascinating history as you visit the gilded staterooms and view the historic tapestries, portraits, and antique furniture that fill its halls and chambers. Beyond the main house are well-manicured formal gardens you can stroll through and which feature everything from water terraces, rose bushes, fountains, elaborate topiaries, and even a secret garden boasting hidden treasures. Blenheim Palace truly is one of the great properties of England.

And so your luxury English countryside vacation comes to an end. Today you'll enjoy one final private transfer from your hotel to the airport, where you'll catch your flight home. Until next time!

Looking for more inspiration for your trip to England? Check out these other 1-week England itineraries, with outdoor adventures, countryside trips, and food and drink tours to hit the highlights.

If you're a Shakespeare lover, a Jane Austen enthusiast, or a Harry...

Get ready for a week of adventures as you tour fascinating historical...
England 7-Day Tours & Itineraries