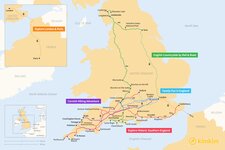 In 10 days, you can experience the highlights of England while also embarking on off-the-beaten-path adventures. Travel from the southern coast to the glassy lakes of the far north, and in between, head off on countryside hikes and visit ancient Roman ruins. And if walking tours of historic cities like London and Oxford still leave you wanting more, then add a jaunt to Paris into the mix.

Itinerary #1: London to the Cotswolds & Somerset

Spend 10 days on a tour of southern England that showcases the highlights of the whole region, from the palaces of London to the historic universities and charming rural villages in the countryside.

Your great British adventure begins in London. Walk in the footsteps of royalty as you visit Kensington Palace, Windsor Castle, and take a very special Buckingham Palace tour for the Changing of the Guard. Then leave the metropolis behind and enjoy a relaxing river ride in Oxford plus a tour of its venerable university. After taking high tea at the 18th-century Blenheim Palace (seat of the Dukes of Marlborough), you'll embark on a driving tour of the famous Cotswolds. This bucolic region is filled with medieval villages and is so charming that it's been designated an Area of Outstanding Natural Beauty.

The trip winds down in the historic city of Bath, known for its ancient Roman ruins and stunning Georgian architecture. After a tour of the Roman baths and a spa treatment, you'll take a literary tour of the city that focuses on one of its most famous residents: Jane Austen. The trip ends with a VIP tour of the mysterious monument of Stonehenge before you return to London for your flight home. Learn more

On a 10-day car-and-train adventure, you'll experience the natural beauty of the north and south of England, from medieval cities to verdant dales and all the sun-kissed majesty of the Dorset coastline.

This epic journey begins with a train ride north from London to York, an ancient city full of Viking and medieval history. On day two, you'll hop in a rental car for a self-driving tour through the moorlands, valleys, and waterfalls of the Yorkshire Dales to England's famous Lake District. After two days of exploring the highlights, like Lake Windermere, you'll head south to the medieval villages and charming cottage homes in the Costwolds, one of the most beautiful regions in England. Next is a trip to nearby Bath, a city famous for its ancient Roman Baths and historic Georgian architecture.

For the last leg of the journey, continue driving south until you reach the stunning coastline in Dorset. Over two days, you'll explore the various coves, harbor towns, and majestic chalk cliffs that have made this one of England's most popular destinations. You'll also roam the Dorset countryside and stop at castle ruins and historic villages like Shaftesbury and West Lulworth. On day 10, you'll return to London. Learn more

A 10-day driving tour of southern England showcases all the natural beauty and historic legacy that has made this region justifiably famous.

Hit the road over two days in rural Kent, known as the "Garden of England," plus visit the White Cliffs of Dover and medieval Canterbury. Then marvel at the fairy-tale castle in Arundel, see Roman ruins in the town of Chichester, and hike ancient woodlands in South Downs Way. You'll spend the next couple of days in the historic county of Hampshire, driving through the scenic woods and taking a ferry to the Isle of Wight to see the 19th-century Osborne House, the vacation home of Queen Victoria.

Then you'll continue west to the beautiful coast of Devon County, passing through Georgian towns like South Devon and Dartmouth along the way. Eventually, you'll arrive in Cornwall, famous for its wildflower-lined sea cliffs, Norman churches, and medieval castles. After enjoying Cornwall, it's off to Somerset County. Visit Glastonbury and learn about its Arthurian legends; tour the 14th-century village of Castle Comb; and stop at the medieval city of Wells, home to the 13th-century Bishop's Palace. On day 10, you'll visit 18th-century Blenheim Palace in Oxfordshire to end the tour. Learn more

Plan your trip to England
Customize your trip with help from a local travel specialist.
Plan Your Trip

This 10-day fantasy and culture tour of England is perfect for the whole family, as not only will you get to experience the major highlights, but you'll also enjoy many "Harry Potter"-themed tours.

Bring the family to London and see the Hop-On, Hop-Off tour bus sights. Highlights include Westminster Abbey, Tower Bridge, and Piccadilly Circus. Then taste the city on a tour of Borough Market, a haven for street food. After that, head to London's West End to see an original "Harry Potter" stage play, followed by visits to Kensington Palace and Buckingham Palace for the Changing of the Guard ceremony. A whirlwind tour stops at the 11th-century Windsor Castle and the Neolithic monument of Stonehenge, plus the city of Bath to tour its ancient Roman Baths.

After enjoying high tea at the famous Savoy Hotel, you and your family will take a studio tour of the "Harry Potter" sets. The movies based on the popular books were all filmed in England, and Warner Brothers has turned one soundstage into a tourist attraction. Here you can see actual sets, creature effects, props, and models used in the films. The wizarding theme continues on day eight with a tour of venerable Oxford University, also a filming location for "Harry Potter." After a river cruise and picnic, you and the family will return to London for the flight home. Learn more

Experience the best of two remarkable capital cities on this combined 10-day London and Paris adventure that mixes free time to explore with organized tours.

After arriving in London, you'll have the first day free to see the sights at your own pace. Once settled, take a walking tour to Buckingham Palace and enjoy all the pomp and pageantry of the Changing of the Guard ceremony. Day three includes a visit to the historic Tower of London, where a few British queens lost their heads. Then get a bird's-eye view of London as you soar over the city on the iconic observation wheel, the London Eye. You can see 25 miles (40 km) out to Windsor Castle on a clear day.

After another free day in London, you'll take the train to Paris. The fun trip passes through the Chunnel, which is the largest underwater tunnel at 31 miles (50 km) in the world. Like in London, you'll explore Paris at your own pace. However, on day eight, you'll get an all-access ticket to the city's most famous landmark: the Eiffel Tower. Then you'll have the option to take a unique tour of the Louvre—the largest museum in the world—during which your guide will reveal the secrets behind its most famous artworks. On day 10, you'll catch a flight home from Paris. Learn more

Put on your hiking boots because you're in for an incredible 10-day excursion along the gorgeous Cornish coastline in southwest England.

You'll arrive in London and warm up with a self-guided walking tour of the city followed by a group tour of some of London's most historic pubs—ale included. On day three, you'll travel to the seaside town of Bude, in the county of Cornish, to start the adventure. The first hike is a relatively easy, 10-mile (16-km) trip during which you'll pass sheer coastal bluffs, protected nature reserves, and ancient forests. The next day is a more challenging 11-mile (18-km) hike from Crackington Haven to the medieval village and castle of Tintagel, passing rocky headlands, secluded beaches, and waterfalls.

The penultimate hike is a 9-mile (15-km) trek past charming fishing villages to the coastal town of Port Isaac. Your last full day of hiking covers 12 rugged miles (19 km) but rewards you with pretty coves, gentle valleys, sandy beaches, and the ruins of an Iron Age fort. Afterward, take a ferry to the historic port at Padstow and the next morning, hop on a train back to London. Then enjoy an easy walking tour that reveals 2,000 years of British history at some of the city's iconic sights, like the Tower of London. On day 10, you'll transfer to the airport for your flight home. Learn more

Looking for more inspiration for your trip to England? Check out these other England itineraries, with outdoor adventures and cultural and family-friendly trips to hit the highlights.

Steven Lee J.
North Carolina, United States
"Without a doubt, the best trip planning experience I’ve ever had. I will never try to plan another overseas trip without kimkim! Louise was absolutely amaz..." read more
Traveled to England solo in June, 2019

Sara K.
California, United States
"Super fun trip, had a great time! Daniel was always very prompt to answer any questions I may have. " read more
Traveled to England as a couple in May, 2019
Plan your trip to England
Customize your trip with help from a local travel specialist
Plan Your Trip