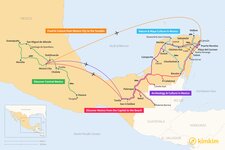 With 15 free days, you can travel from Mexico City to the Yucatán Peninsula and everywhere in between. That means you can visit ancient Aztec cities near the capital and immerse yourself in the indigenous culture, food, and natural beauty of Oaxaca, Puebla, and Chiapas. Beyond those highlights, you can venture deep into the Yucatán region to explore Spanish-colonial cities, incredible Maya ruins, and the most beautiful white-sand beaches in the country.

Itinerary #1: Discover Mexico from the Capital to the Beach

This 15-day adventure combines the best of Mexico's history, culture, and natural beauty—from the capital city to the Caribbean shores and cenotes of the Yucatán.

Arrive in Mexico City. Founded in 1521, before that, it was Tenochtitlan, the capital of the Aztec Empire. On a walking tour, you'll see this history in landmarks like the 16th-century Metropolitan Cathedral and the Aztec Templo Mayor. Then visit Coyoacán and Xochimilco. The former is a colonial enclave home to Casa Azul (the Frida Kahlo museum), and the latter is famous for its network of canals once used by the Aztecs. Then fly to Chiapas to experience more indigenous culture. First, take a boat ride amid the 3,300-foot (1,000-m) cliffs of Sumidero Canyon, then enjoy a cooking class at the home of a local Tzotzil Maya indigenous family.

After touring the colonial highland town of San Cristóbal, you'll visit Agua Azul, a waterfall known for its terraced turquoise pools. Next, journey into the Yucatán Peninsula, stopping at the archeological site of Palenque for a tour. The next few days, you'll spend on jungle hikes and lagoon cruises of the biosphere reserves and jungles in Campeche. This includes visits to various cenotes (limestone sinkholes). After a cultural workshop at an indigenous village, you'll arrive at the Caribbean coast and town of Bacalar. You'll sail the waters of its namesake lake, after which you'll head north to Cancún for three full days of relaxation. Learn more

Spend 15 days exploring Mexico's capital and the historic Spanish-colonial cities just north of it before ending the trip enjoying the delicious food and rich culture of Puebla and Oaxaca.

For a few days, you'll enjoy walking tours around Mexico City's Plaza de la Constitución. Ride the canals in Xochimilco and walk the colorful streets of Coyoacán before heading north to the states of Michoacán and Guanajuato, known for their UNESCO-rated Spanish-colonial towns and cities. You'll see the famous stone aqueduct of Morelia, walk the cobbled streets of Guanajuato City, and marvel at the Cathedral in San Miguel Allende, before taking a rest in its lively central square, El Jardín. The last stop in the area is Querétaro, another historic UNESCO city with an 18th-century aqueduct.

Then travel to Teotihuacán, once the largest city in Mesoamerica. On a walking tour, you'll visit highlights like the 215-foot (66-m) Pyramid of the Sun. Afterward, continue south to Puebla, a city with a unique culture and historical significance. You'll tour its Zócalo de Puebla and 17th-century Cathedral plus stroll through colonial neighborhoods. Then head further south to the city of Oaxaca. It's a special place, filled with Spanish-colonial architecture yet rich with the culture of the Zapotec and Mixtec indigenous peoples. You'll also visit Oaxaca's most famous archeological site: Monte Albán, a 6th century BCE capital city of the Zapotec people. Learn more

Mexico boasts around 30,000 archeological sites, and on this 15-day tour, you'll visit highlights like Teotihuacán, Palenque, and Chichén Itzá—plus enjoy beach time on the Yucatán coast.

Begin your archeology tour in Mexico City with a visit to Templo Mayor. Then visit the Museum of Anthropology and see highlights like the Aztec Calendar. Follow this with a stroll down the mile-long (2-km) Avenue of the Dead, the main thoroughfare in Teotihuacán, and hike up the pyramids. On day three, fly from Mexico City to Chiapas for a boat tour of Sumidero Canyon, walking tours of San Cristobál, and swimming at Agua Azul and romantic Misol-Ha waterfalls and its emerald lagoon.

On day seven, you'll visit Palenque to explore its pyramids, then head to the base of the Yucatán and the colonial port city of Campeche. See the 16th-century fortresses and battlements that once protected the city from pirate attacks before heading to Edzná. This is the first of the Maya sites you'll visit. A bit off the tourist trail, the pyramids and palaces you'll see here date between 300 BCE and 1200 CE. Next is Uxmal, the ruins of a Maya city whose famous landmarks include the Pyramid of the Magician and Governor's Palace.

Then you're off to Mérida, a beautiful city founded in 1542 and the capital of the Yucatán region. After touring its colonial landmarks, you'll take a day trip to Chichén Itzá, one of the New Seven Wonders of the World. This was one of the greatest cities in the ancient Maya kingdom and is famous for its temples and pyramids, like the breathtaking 98-foot (30-m) El Castillo. The trip winds down on the coast, where you'll swim in remote cenotes and snorkel at the pristine National Reef Park in Puerto Morales. Learn more

On this trip, you'll forgo the capital and fly into Cancún before transferring down the coast on a scenic ride to the resort town of Tulum. After visiting nearby cenotes, you'll explore Tulum's ruins, dating to around 1200. On day three, take a group eco-tour of the Sian Ka'an biosphere reserve, the largest protected area in Mexico. You'll hike through the jungle, take a boat tour down mangrove waterways, and swim in lagoons. The following day, you'll drive to nearby Bacalar for a sailing tour on the turquoise waters of its eponymous lake.

On day five, head deep into the jungles of Yucatán, where you'll immerse yourself in the culture of Maya communities. First is a real treat: a bonfire ceremony around the sacred Ya'ax ché (ceiba tree) in which you'll commune with elders and purify yourself with a local drink of the gods. In these forests, you'll also see how locals harvest natural gum from chicozapote trees before continuing north to Uxmal for a tour of the ruins. Then head to colonial Mérida, your base for excursions to the northern cenotes and white sand beaches of Sinanché and San Crisanto.

From Mérida, you'll head east to Izamal for a tour; a bright colonial town designated a Pueblo Mágico (Magical Town). Get up early on day 11 for a sunrise tour of Chichén Itzá, then transfer to the northern tip of Yucatán to Holbox Island for three nights in tranquility: there are few crowds and no roads. After Holbox, you'll transfer to Puerto Morelos and depart from Cancún on day 15. Learn more

Itinerary #5: Food & Culture from Mexico City to the Yucatán

This 15-day excursion around central and southern Mexico celebrates two of this country's best attributes: its delicious food and rich indigenous culture.

Start the adventure by visiting Mexico City's highlights—like the Palacio de Bellas Artes and the 16th-century National Palace—while also stopping to enjoy delicious street food. After touring the Museum of Anthropology, you'll sample Mexico's famous spirits like tequila and mezcal. Day four embark on a fun bicycle tour of Teotihuacán before flying to the Yucatán and hiking Tulum's ruins. Complimenting this is a day trip to Sian Ka'an and then a trip to the ruins of Cobá, an ancient Maya city that thrived from 600-900 CE. Its Nohoch Mul pyramid stands 137 feet (41 m) high, making it the tallest in Yucatán.

On day nine, take a walking tour of Chichén Itzá, followed by a drive to nearby Valladolid, a historic colonial city that, like Izamal, has been designated a Pueblo Mágico. Then travel on an ancient Maya pathway to the fantastic Cenote X'Canché. Next, you'll have a few days to relax on Holbox Island. Besides kite-surfing and swimming with whale sharks, you can also spot electric blue bioluminescence in the water at night. You'll also take a boat tour of three nearby islands that are havens for bird species like herons and flamingos. On day 15, you'll fly home from Cancún. Learn more

Looking for more inspiration for your trip to Mexico? Check out these other Mexico itineraries, with outdoor adventures, family-friendly trips, and best-of tours to hit the highlights.

Discover Mexico from the Capital to the Beach: Palenque, ...

Get to the heart of Mexico's rich culture over 15 days that will take...

This adventure covers the most incredible ancient cities in the country....
Mexico 15-Day Tours & Itineraries

Highlights of the Yucatán & Diving in Cozumel - 6 Days

In less than a week, you can experience the historical highlights and...

G
Grainne A.
Ireland
"Karen helped us plan our honeymoon to Mexico and we couldn't be happier with our trip. She took everything we discussed on board and planned our 11 day tri..." read more
Traveled to Mexico as a couple in August, 2022

Jazmin D.
New York, United States
"My husband and I had the best vacation of our lives while visiting Oaxaca, Mérida, Valladolid and Puerto Morelos in México. Vanessa helped us tailor the trip..." read more
Traveled to Mexico as a group in July, 2021
Create your custom-made trip to Mexico
Get Started