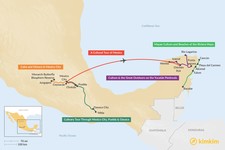 If you have a week to spend in Mexico, you can do a deep dive into one region like the Riviera Maya, or hop between two cultural hubs like Mexico City and Oaxaca. Explore the Mayan ruins and cenotes of the Riviera Maya, go on a food-focused tour to Oaxaca and Puebla, or visit off-the-beaten-path nature reserves on the Yucatán Peninsula—learn how to structure your time and plan a trip with these five unique itineraries.

On this lively itinerary, you'll see Frida Kahlo's house, cruise down the canals of Xochimilco on a traditional boat, and trek to the top of the pyramids in Teotihuacán.

After checking into your hotel, go for a stroll through the historic center or explore the neighborhoods of Roma and Condesa, full of art galleries, cafés, shops, bars, and restaurants. On day two, go on a bike tour of Teotihuacán, the largest and most influential city in the history of the New World. Cycle through the valley and past the pyramids. Next, move onto the next destination of your trip: Jungapeo. Relax and recharge in the wilderness—you'll have access to a spa and a temazcal (a traditional sweat lodge used by the pre-Columbian people to purify their bodies and care certain diseases).

On day four, go on a trek to see interesting caves and the Tuxpan River, then treat yourself with a dip in thermal waters. The next day's excursion takes you to the Monarch Butterfly Biosphere Reserve, a UNESCO World Heritage Site, to see thousands of butterflies. Next, head to the canals of Xochimilco for a ride on a trajinera (a decorated boat) and then to Coyoacán to learn about the life and work of Mexican artist Frida Kahlo. Try a deep-fried quesadilla in the marketplace nearby, then go out for drinks on your last night in Mexico. Learn more

Itinerary #2: A Cultural Tour of Mexico

On this wide-ranging trip that features stops at Merida, Teotihuacan, Chichén Itzá, and Cholula, you'll learn about the ancient cultures that once inhabited the land area now known as Mexico.

Get to know Mexico City on the first few days of the trip. On a guided tour, you'll visit the main square in the city, known as the Zócalo, see the magnificent National Palace, and go inside the Metropolitan Cathedral and its chapels and bell towers. Head to the National Museum of Anthropology before catching a performance of Ballet Folklorico de Amalia Hernandez. Leave the city behind the next day and travel to Cholula to see the Great Pyramid of Cholula, the largest pyramid in the world. Continue onto Puebla and tour the historic center before returning to Mexico City.

Catch a domestic flight to Mérida and tour the city's main attractions, including the impressive cathedral and busy Montejo Avenue. The following day, you'll tour the Mayan ruins of Chichén Itzá, once the most venerated center of worship and pilgrimage on the Yucatán Peninsula. Visit the Pyramid of Kukulkán and the Temple of the Warriors before traveling to Ik Kil Cenote for a refreshing afternoon dip. You'll fly out the next day. Learn more

Plan your trip to Mexico
Chat with a local specialist who can help organize your trip.
Get Started

Itinerary #3: Mayan Culture and Beaches of the Riviera Maya

There's something for everyone on this varied trip plan to the Riviera Maya: relaxing on the beach, snorkeling through cenotes at Xcaret, learning about ancient civilizations in Tulum, and nightlife in Playa del Carmen.

Touch down in Cancun and make your way by shuttle bus to Playa del Carmen. Relax by the hotel pool, stroll along the beach, and have street tacos at one of the city's many restaurants. The next day, you'll go to Chichén Itzá, an archaeological site considered one of the New Wonders of the World, and Ik Kil cenote, a stunning example of the 6,000-plus sinkholes in the Yucatán region. Then day-trip to the resort town of Akumal, noted for its white sands, coral reef, clear water, and marine life, especially turtles.

Continue on to discover the archaeological site of Tulum, one of the most important sites of the Mayan culture, located on the edge of the Caribbean Sea. Then rent a bike to explore the sprawling ruins of Cobá, an archaeological site filled with pyramids. Go on a kayaking and zipline adventure in Bacalar, enjoying gorgeous views over the lagoon. You'll stay in Bacalar overnight. Then go snorkeling and swimming—and catch a cultural show with more than 300 artists on stage—at Xcaret Park. You'll have a free day in Playa del Carmen to relax before the trip comes to a close. Learn more

Eat your way through a few of Mexico's most popular destinations—Mexico City, Puebla, and Oaxaca—on this taco-filled weeklong tour.

Get oriented in Mexico City before traveling on the second day to the world-famous archaeological site of Teotihuacán. Climb the Pyramid of the Sun and the Moon, and in the afternoon, stop at the Basilica Of Our Lady of Guadalupe, a key monument for Mexico's large Catholic community. Then spend the next day on a food-focused tour of Puebla, the neighboring city to Mexico City, sampling a wide range of antojitos (Mexican snacks).

Next up, you'll drive four hours to Oaxaca and have the afternoon off to explore one of Mexico's top foodie capitals. Day-trip to see an ancient Tule tree—approximately two thousand years old—and bathe in the mineral-rich waters at Hierve el Agua, a petrified waterfall located in the mountains. Visit the village of Teotitlán del Valle, famous for handicrafts. On the last full day of the trip, tour a Zapoteca community in the Oaxaca Valley and take a cooking class in a local family home. You'll have one last night in Mexico City before heading home. Learn more

Itinerary #5: Culture & the Great Outdoors on the Yucatán Peninsula

Get beyond the tourist resorts and into the native communities, archaeological sites, and nature reserves of the Yucatán on this off-the-beaten-path itinerary around one of Mexico's most beloved regions.

The adventure begins in Punta Laguna. This reserve is a beautiful natural environment managed by a Mayan cooperative. You'll go on a hike, looking for spider monkeys and howler monkeys, and go for a sailing trip on the lagoon. Continue to the archaeological site of Cobá, surrounded by beautiful lagoons and trees: you'll have the option to rent a bike to explore the sprawling grounds. Then go on a tour to Rio Lagartos, a protected reserve where you may see flamingos, crocodiles, sea turtles, even a jaguar.

Move onto the Yucatec-Maya archaeological site of Ek' Balam, once a thriving seat of a Mayan kingdom, and stop in a local village to visit three Mayan families and learn how to make tortillas. Stop at X'Canché Cenote to enjoy a swim. Tour Chichén Itzá at sunrise the next day, then go for an afternoon dip in the cenote at Yokdzonot, which is relatively unknown and uncrowded. Stroll along the picturesque cobbled streets of Izamal, then continue to Mérida, where you'll see the cathedral, the main square, and the government hall with its incredible paintings. Finish with a kayak tour through mangrove paths, a visit to the archaeological site of X-Cambó, and relaxing on the beaches of Progreso. Learn more

Looking for more inspiration for your Mexico trip? Check out these other 7-day Mexico itineraries, ranging from active, to cultural, to luxury, or family-friendly trips.

Culture & the Great Outdoors on the Yucatán Peninsula - 7...

On this colorful trip plan, you'll experience Mexican culture in an...

On this food-focused tour, you'll discover authentic Mexican cuisine at...

The largest pyramid in the world is in Mexico, as are some of the...

On this itinerary, you'll dive into Mexico City and explore everything...

Get away from the hustle and bustle on this adventurous weeklong trip to...
Mexico 7-Day Tours & Itineraries

How Many Days Should You Spend in Mexico?

July in Mexico is all about beach time and water adventures. It is one...

How Many Days Should You Spend in Mexico?

If you're short on time but don't want to compromise on adventure, this...

D
Dick R.
Kentucky, United States
"we were very happy with how smoothly everything went. fair amount of moving us from place to place and all went perfectly . hotels were great and in wonderf..." read more
Traveled to Mexico as a group in March, 2022
K
Kris S.
California, United States
"Enjoyed using Rutopia (Marisol and Melina) to plan my trip to Mexico. Marisol helped me figure out the best options fand booked everything. Melina was my in..." read more
Traveled to Mexico as a family in December, 2022

Richard G.
Mexico
"Jorge and Melina did a great job and I was very happy with my trip. On very short notice during the high season, Jorge put together a perfect itinerary. I ha..." read more
Traveled to Mexico solo in December, 2019
Create your custom-made trip to Mexico
Get Started