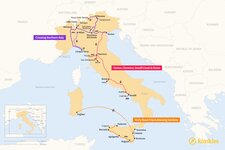 You can explore far and wide in three weeks, returning home with memories of many of the top Italy destinations you visited. Maybe you want an experiential tour focused on one destination, such as Northern Italy. Or spend time soaking in the classics, such as Rome, Florence, Venice, and the Amalfi Coast. And if you love to drive, then combine an exploration of Sicily with the sister Italian isle of Sardinia.

Spend three weeks on this self-drive tour of Sicily, including four days in nearby Sardinia, combing two cultural melting pots known for their archaeological treasures and gorgeous beaches, and including a hike on Mount Etna.

Begin in Palermo, the regional capital of Sicily, with a guided tour of the city's main plazas and 16th-century catacombs before visiting the salt flats and windmills of Mozia, sampling the famous wines of Marsala, and sneaking in beach time in Trapani. Next, drive the scenic coastal route to Agrigento, where a full day of exploring the Valley of the Temples with an expert guide brings the Greek ruins to life. Then, it's on to hilltop Ragusa, with its sloping and tangled alleyways, before hitting the road for the "Baroque Triangle": Modica (with time to visit a famous chocolatier), Ragusa, and Noto.

For week two, make your way to Syracuse, with stops en route to enjoy the beaches. After a guided walking tour of this ancient cultural center, plus free time on nearby Ortygia Island, drive to chaotic, gritty, and mesmerizing Catania (perfect for nightlife). Here, you'll be accompanied by a private guide as you explore enchanting villages along the Acireale Coast. Then head north to hike Mount Etna before arriving at the popular resort of Taormina, where a guided tour (including the well-preserved ancient Greek Theatre) precedes an entire day free for relaxing or for exploring its museums and other sites.

On day 17, fly to Cagliari, in Sardinia, and pick up your rental car before exploring the city's historic center, rich with ancient Roman ruins. Finally, spend three days exploring Sardinia, taking in the seaside archaeological site of Nora and the many beautiful beaches along the stunning Chia Coast. Learn more

This 21-day immersive itinerary delivers a deep dive into Italian lifestyle and culture as you explore many of the most quintessential cities, plus the sunny beaches and cliff-hanging resort villages of the Amalfi Coast.

Start in Rome, then transfer by high-speed train to Venice. Begin with a romantic gondola tour, followed by an evening foodie walking tour. The next day, tour the highlights, like Piazza San Marco and San Marco Basilica, the Grand Canal, and the Doge's Palace. You'll also explore Venice by bicycle, and nearby islands by motorboat, including a glass-making tour in Morano. Follow five days in Venice with five nights in Florence. After visiting Florence's iconic Duomo, Galleria dell'Accademia (displaying Michelangelo's "David"), and the world-famous Uffizi Gallery, spend a day touring the Chianti region of Tuscany.

Then head to Pisa to climb the famous Leaning Tower and learn the art of Tuscan cooking before departing by train to Naples for the Amalfi Coast and a sunset boat tour to Positano. Spend four days on the Amalfi Coast, where highlights include a hike to Castello di San Nicola, a pizza-making class, and a hydrofoil ride to the isle of Capri for swimming in the iconic Grotta Azzurra ("Blue Grotto"). Finally, you'll head to Rome, with four days to dive into Roman Empire history with a tour of the Colosseum and other ancient sites. The next day, you'll visit the Vatican and its Sistine Chapel and St. Peter's Basilica.

Plan your trip to Italy
Chat with a local specialist who can help organize your trip.
Get Started

For two days in Venice, you'll cover the major attractions and cross plenty of iconic bridges spanning the Grand Canal. There's exploration of lesser-known districts, such as Cannaregio, plus a classic ride in a Venetian gondola. Then head to the Merano to hike the Sarentino Alps and/or Stelvio National Park, bathe in the natural swimming pool at Gargazon, and explore Trauttmansdorff Castle. Next comes lakeside Peschiera del Garda, with three days dedicated to such activities as sailing and windsurfing on Lake Garda, a panoramic cableway ride to the top of Monte Baldo, and a scenic boat ride to Sirmione.

After free time to further explore Lake Garda, head to Lake Como for a kayak tour, then to Lake Maggiore for your choice of activity. Dedicate another day to exploring the three Borromean Islands in the middle of Lake Maggiore, getting between them by ferry. End your second week with a private guided boat cruise around Lake Orta, including hiking to the heights of the Sacro Monte di Orta religious complex. Your final week spends four days trekking in the Cinque Terre coastal region. After the fifth day at leisure in Cinque Terre, hop aboard a high-speed train for Milan, where you'll see Leonardo da Vinci's "The Last Supper." Learn more

Looking for more inspiration for your trip to Italy? Check out these other 3-week Italy itineraries, with trekking trips, cultural adventures, and best-of trips to hit the highlights.

Dive deep into Italian life and culture on this immersive 21-day...

Explore the back roads and small villages that characterize the...

Highlights of Italy and Greece: Rome, Florence, Venice, A...

From Rome's ancient center to the stunning caldera of Santorini, this...

Indulge in the best of the Mediterranean region's food and wine on this...
Italy 3-Week Tours & Itineraries

You can explore far and wide in three weeks, returning home with...

From a Gondola ride through the Venetian canals to a skip-the-line...

Get to the heart of Sicily on this 9-day road trip that explores cities,...

Michael G.
California, United States
"Absolutely perfect trip top to bottom. White glove service all along. Alessandro was fantastic at both his plan for us and his willingness to work with us as..." read more
Traveled to Italy as a family in July, 2022

Jennifer N.
Canada
"Everyone was incredibly friendly, punctual and helpful! It made for a very smooth and seamless trip experience! Would definitely recommend " read more
Traveled to Italy as a family in July, 2022
G
George T.
South Carolina, United States
" We had a wonderful time on our Italian vacation and we would like to thank Andrea for all his help to organize this trip. It gave us comfort knowing that if..." read more
Traveled to Italy as a couple in July, 2022

Colleen Y.
California, United States
"We used kimkim to help us plan our honeymoon to Italy (Rome, Venice, Amalfi Coast). The entire process from start to finish was so easy for us - all thanks t..." read more
Traveled to Italy as a couple in June, 2022
Create your custom-made trip to Italy
Get Started