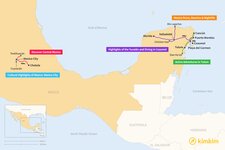 Whether your goal is a quick escape from the grind to recharge your batteries, or you'd like to pack in as many adventures as possible in just a few days, Mexico is the ideal country. In even as few as six days, you can experience the major highlights of Mexico's capital as well as historic Puebla and neighboring Cholula. Or travel further south and hit the best beaches on the Yucatán Peninsula while also visiting nature reserves and diving into turquoise cenote lagoons.

Take a six-day break from your worries with this visit to not only the best beach destinations in the Yucatán but visits to underground rivers and ancient Maya ruins, too.

Your beach getaway starts in Cancún, the liveliest spot in Mexico's Yucatán Peninsula. Upon arrival at the airport, a driver will take you to your hotel for check-in. Once settled, you'll head out to the mystical Río Secreto, one of the world's largest underground rivers. The entire Yucatán region is known for its thousands of cenotes (limestone sinkholes) fed by just such subterranean water sources. On a guided 3.5-hour tour, you'll strap on a helmet, explore the underground caverns, and swim in the river.

After a free day enjoying the powdery white-sand beaches of Cancún, you'll head out on a ride down the 100 miles (160 km) of Mexico's famous Riviera Maya. This section of highway runs along the most beautiful parts of the Caribbean coast, from Cancún to the resort town of Tulum. Once in Tulum, you can do some shopping, visit its stunning Playa Ruinas beach, and hike to the cliffs just above, where you'll find the ruins of an ancient fortress city. Finish the trip an hour north in Playa del Carmen, a fun beach town where you can swim in nearby cenotes and visit wildlife parks. Learn more

Indulge in the best of Mexico City over six action-packed days, including walking tours of the historic center, food tours of popular markets, and an e-bike ride to the trendiest neighborhoods.

This time, you'll arrive in Mexico City (known as DF to locals), a beautiful metropolis with history, culture, and delicious surprises around every corner. You'll discover it on day two with a walking tour of the historical center to see Spanish-colonial landmarks like the 16th-century Metropolitan Cathedral and the Plaza de la Constitución, better known as the Zócalo. You'll stop to sample the city's famous street food, like tacos al pastor and quesadillas with huitlacoche. That evening, you'll taste a bit of mezcal (an agave-based spirit) before heading to the Arena Mexico for a wild Lucha Libre wrestling show.

On day three, visit the southern enclaves of Coyoacán and Xochimilco. In the former, you'll see 16th-century landmarks like San Juan Bautista Church and stop at La Casa Azul, the house where Frida Kahlo spent much of her life. In Xochimilco, you'll travel by gondola down ancient canals that the Aztecs once used for transport. Then visit San Juan Market to sample its gourmet delights, followed by a stop at Vasconcelos Library, a marvel of contemporary architecture. Cap the trip with an e-bike tour of famous neighborhoods like Roma and Polanco before returning home on day six. Learn more

Spend six days relaxing on the postcard beaches of Tulum while heading out on day trips to biosphere reserves, hidden cenotes, and the Río Secreto.

Like the first itinerary, you'll arrive in Cancún, but this time right when you arrive, you'll transfer down the Riviera Maya to Tulum. The next day you'll head off the tourist trail with a visit to Chemuyil, a village known for its nearby cenotes, which you'll get to visit on a nature hike. Finish the day with a tour of the fortress ruins back in Tulum, including the site's most impressive structure, El Castillo, which stands 25 feet (7.5 m) and once served as a lighthouse and temple.

On day three, you'll explore the waterways and caverns of the Río Secreto on a guided group tour and will be allowed to swim in the underground river. The next day you'll head to the nearby Sian Ka'an, a Biosphere Reserve. This Unesco World Heritage Site is Mexico's largest protected area, covering an area of over 2,000 sq miles (5,180 sq km) that includes forest, coastline, mangroves, and lagoons. It's a full day of excitement as you embark on nature hikes, boat trips, and swims down tranquil canals. After a free day to kick back and relax on Tulum's beaches, you'll head home on day six. Learn more

This six-day exploration of central Mexico includes the cultural and culinary highlights of Mexico City plus a trip to Cholula and Puebla to discover more indigenous and historical treasures.

The day you touch down in Mexico City, you'll hit the streets. This walking tour will take you to historic landmarks like the 16th-century National Palace and the ruins of the 14th-century Templo Mayor, once a prominent temple of the Aztec Empire. You'll also stop at a famous municipal market to sample fresh produce and search for incredible street-food tacos. Follow this with a visit to Teotihuacán, Mexico's largest archeological site, which dates to 400 BCE. Ride a bicycle down the Avenue o the Dead (the site's main road) and a hike up the 140-foot (43 m) Pyramid of the Sun.

Then head south from Mexico City to Cholula, an area first settled in 200 BCE, making it one of the longest continuously inhabited cities. It's adjacent to Puebla, and you'll see the highlights of both on walking tours. Take a stroll through Puebla's Zócolo (main square) and admire its 16th-century Cathedral, then visit Cholula's neoclassical church, which dates to 1574. It was built on an ancient indigenous pyramid and offers excellent views over the Valley of Mexico. After free days browsing Cholula's markets and enjoying more activities in Mexico City, you'll return home. Learn more

Itinerary #5: Highlights of the Yucatán and Diving in Cozumel

This six-day adventure in the Yucatán takes you beyond the Riviera Maya to ancient temple ruins and historic colonial cities, plus a quick trip to the island of Cozumel to enjoy the best diving in the region.

You'll arrive in Mérida, the capital of Mexico's Yucatán state. This historic city was founded in 1542, and you'll see many Spanish-colonial highlights on a tour of its historic center. On day two, head to the peninsula's northern tip and the Río Lagartos Biosphere Reserve. On a nature hike, you'll see flocks of pink flamingos and take an exfoliating bath in the same mineral clay favored by the ancient Maya. Then enjoy a tour of Chichén Itzá, a Maya archeological site covering four sq miles (10 sq km). The star of the site is the El Castillo pyramid, which stands 79 feet (24 m).

Continue to the coast, where you'll take a ferry from Playa del Carmen to Cozumel. This island is known for its white-sand beaches and crystalline waters, but it's also situated on the Mesoamerican Reef, which offers some of the best diving in the western hemisphere. On day four, you'll learn the basics from a dive instructor, then spend the day on a scuba tour. Around the reef corals, you'll see a vast array of marine life, including tropical fish, turtles, rays, eels, and maybe even a (harmless) nurse shark. You'll return to the mainland on day five for a tour of Tulum's ruins, then head home. Learn more

Looking for more inspiration for your trip to Mexico? Check out these other Mexico itineraries, with outdoor adventures, family-friendly trips, and best-of tours to hit the highlights.

On this quick itinerary of Chiapas, you'll explore the highlights in and...

If you're short on time but don't want to compromise on adventure, this...

Spend six days exploring the best of Mexico's Yucatan Peninsula as you...

Explore the best of the Chiapas region of Mexico on this six-day foodie...

Explore the history and culture of Mexico with this 13-day tour,...

Tim Z.
Maryland, United States
"Overall, our Mexico trip was amazing and I was very happy with our accommodations and planned activities. All of our guides were great, but a special shout-o..." read more
Traveled to Mexico as a couple in November, 2021
M
Matthew W.
United Kingdom
"This was my second trip organised via KimKim. Again, I cannot fault the service. Always very responsive and helpful. Thank you so much for your help." read more
Traveled to Mexico solo in November, 2020
Create your custom-made trip to Mexico
Get Started