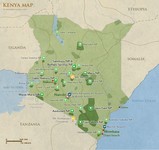 While many tours of Kenya focus on the country's spectacular national parks and wildlife, relatively few combine such activities with a deep dive into East African culture. This tour does both. Learn about the prehistory, history, and culture of what has been called the "cradle of humankind".  Visit some of Kenya's top museums and cultural sites—including the Nairobi National Museum, the Karen Blixen House, and the Baden-Powell Museum—as well as its finest parks and landscapes, including the Great Rift Valley, Amboseli National Park, and more.

Just before your plane touches down at Jomo Kenyatta International Airport in Nairobi you will have a good view of Nairobi National Park. You'll be met at the airport and taken to your hotel.

Depending on your time of arrival you may wish to rest at your hotel or do some preliminary sightseeing in Nairobi. Options for your first day include:

One of the best ways to spend your first day in Kenya is to see wild animals in their natural habitat. The Nairobi National Park is just 5.5 miles (9 km) from the city center, so it's easy to get their early in the day, when the animals are most active. Go on an early-morning game drive to see rhinos, lions, giraffes, buffalos, gazelles, zebras, and more.

Later in the morning, visit the African Heritage House, which houses an invaluable collection of African art and cultural artifacts. Have lunch here while learning more about African culture.

Day 3: Explore the Museums of Nairobi

Today you can learn so much more about Kenyan and East African culture and history, beginning at the Nairobi National Museum. The museum’s permanent collection is entered via the Hall of Kenya, with some ethnological exhibits, such as the extraordinary Kalenjin cloak made from the skins of Sykes monkeys, and a mosaic map of Kenya made from the country's butterflies. Beyond this hall is the spectacular Birds of East Africa exhibit, the Great Hall of Mammals, the Cradle of Humankind exhibition, and the Hominid Skull Room. Upstairs, the History of Kenya display is an engaging journey through Kenyan and East African history. Well presented and well documented, it offers a refreshingly Kenyan counterpoint to colonial historiographies.

From the museum, it's a short walk to the Snake Park, where you'll take a tour with one of the local volunteer guides.

If you didn't visit it on your day of arrival, after lunch you'll head out to the Karen Blixen Museum. The house was built in 1912 by Swedish Engineer Ake Sjogren, and was bought by Karen and her husband in 1917. Their marriage failed, but Karen lived in this house until 1931, when she returned to Denmark. Learn more about her life and work at this museum.

Day 4: Visit the Homeland of the Kikuyu People

Today you'll visit the ancestral home of the Kikuyu people, Kenya's largest ethnic group, to learn about their traditional way of life. Departing early from Nairobi, you'll be driven to Mukurwe wa Nyagathanga. Here, you'll learn about Kikuyu history, interact with elders, try their food, and even drink their local beer.

The Kikuyu comprise about 22% of the total population of Kenya, and speak the Bantu Kikuyu language. Because they resented the occupation of their highlands by European farmers and other settlers, the Kikuyu were the first native ethnic group in Kenya to undertake anti-colonial agitation, in the 1920s and ’30s. They staged the Mau Mau Uprising against British rule in 1952, and spearheaded the drive toward Kenyan independence later in the decade. They became the economic and political elite of independent Kenya, so visiting the heartland of the Kikuyu people presents an opportunity to learn more about Kenyan history and culture.

Today you'll visit an important pilgrimage site for many Boy Scouts and Girl Guides. If you were a Scout or a Guide in your own youth, you won't want to miss this place! Lieutenant-General Robert Stephenson Smyth (Baden-Powell) was the founder and Chief Scout of the Global Boy Scouts Association and Girl Guides. The Baden-Powell Museum is located along the Nyeri-Kamakwa Road. Not far away is the Baden-Powell Information Center and Graveyard, where he was buried, together with his wife. The graveyard is a national monument, and a very important site for the Boy Scout Association and Girl Guides.

Day 6: Tour the Kariandusi Prehistoric Site in the Rift Valley

Today you'll shift gears and drive down to a prehistoric site at Rift Valley, where you'll learn why Africa is nicknamed the "cradle of humankind". The Early Stone Age in Africa extended from about 2.6 million years ago to 280,000 years ago. This was when the most well-known human ancestors were evolving: Australopithecus Afarensis, Paranthropus Boisei, Homo Habilis (the "Handy Man"), and Homo Erectus. Learn more about this period of history and this region of Kenya's significance to the world at the Kariandusi Prehistoric Site, then continue to Naivasha for your overnight stay.

Mt. Kilimanjaro belonged to Kenya until 1886, when Queen Victoria gave it to her grandson, Kaiser Wilhelm II of Germany, as a birthday gift. Although now it is in Tanzania, many beautiful photos of the mountain are taken from the Kenyan side, as the view from Kenya's Amboseli National Park is amazing, as you'll discover during two days at the park.

The name "Amboseli" comes from a Maasai word meaning "salty dust", and it is one of the best places in Africa to view large herds of elephants up close. Nature lovers can explore five different habitats here, ranging from the dried-up bed of Lake Amboseli, wetlands with sulfur springs, the savannah, and woodlands.

Travel to the Tsavo National Park today. Tsavo is made up of two separate parks: Tsavo East and Tsavo West National Park. It was split in two to make way for the railway from Mombasa to Kenya's interior. Combined, Tsavo is the largest national park in Kenya, and one of the largest in the world. It's even bigger than Israel!

From Mzima Springs to the Shetani lava flows, Tsavo West is a beautiful, rugged wilderness. The savannah ecosystem comprises of open grasslands, scrublands, and acacia woodlands. It's also famous for the "Tsavo Man-Eaters", a pair of maneless male lions that were responsible for the deaths of around 140 railway construction workers in 1898!

From Tsavo West you'll travel to the Lumo Community Wildlife Sanctuary, bordering Tsavo West. The sanctuary preserves a unique ecosystem rich with wildlife, encompassing one of Africa’s most ancient elephant migratory corridors and an important breeding site for lions. This area was also a World War I battlefield, where the so-called Ice Cream War took place (and thus named because the troops practically melted in the sun!)

Bird lovers are in luck today, as you travel to the Taita Wildlife Conservancy, home to over 300 species. Some birds that you'll see are the marsh warbler, river warbler, red-backed shrike, thrush nightingale, common whitethroat, and African eagles. In the evening you'll get particularly good views of eagles. In the company of sharp-eyed guides, you're guaranteed to see a variety of birds here.

Make an early start this morning to catch your train to Mombasa city. After your arrival, spend the afternoon relaxing or take a seaside walk in this exotic city. This cosmopolitan tourist hub has several beautiful beaches that are popular for sunbathing, swimming, walking or just relaxing.

Spend today getting to know the coastal city. You can enjoy a variety of sights and activities, including:

It's time to say farewell to Kenya today. Take an early morning flight from Mombasa to Nairobi, where you'll connect to your international flight onwards or back home.

Plan your trip to Kenya

Plan your trip to Kenya

This two-week itinerary includes some of the best wildlife encounters...

Explore nature and wildlife in Kenya with safaris and visits to Maasai...

With more than 1,100 species of birds, Kenya is an absolute mecca for...

While many tours of Kenya focus on the country's spectacular national...

If you want to experience all of Kenya's top destinations—while also...

Explore Kenyan wildlife, landscape, and native culture in this 10-day...

This exciting 10-day itinerary gives you the chance to truly discover...

This active, 12-day adventure includes some of Kenya's best outdoor...

Travelers who enjoy the finer things in life while getting out into...
Kenya Tours & Itineraries

Due to the dry weather, January is considered high season in Kenya—a...

February is the dry season in Kenya and, due to the lack of rain, also...

In March, the weather transitions quickly from "hot and dry" to "wet and...

April is a wet, rainy month in Kenya. The coasts are extremely hot and...

Kenya in May: Travel Tips, Weather, and More

The rainy season is in full effect during the month of May when showers...
Kenya Travel Advice

Kimkim has selected the best Kenya travel agents so you'll have a...

If you want to experience all of Kenya's top destinations—while also...

December is a wonderful time to visit Kenya—the weather is warm and...

Kenya is an excellent place to holiday in Africa, especially for...

This exciting 10-day itinerary gives you the chance to truly discover...

Explore Kenyan wildlife, landscape, and native culture in this 10-day...

While many tours of Kenya focus on the country's spectacular national...

Explore nature and wildlife in Kenya with safaris and visits to Maasai...

This exciting itinerary includes unforgettable game drives in Kenya and...

Explore the rich ecosystem of the Masai Mara Game Reserve with daily...

Lake Victoria is the largest lake in Africa and the second-largest...

Kristin M.
Georgia, United States
"Oh my, what an amazing experience. Susan was just absolutely fabulous. Answered all my questions promptly and just truly arranged an amazing trip for my 50..." read more
Traveled to Kenya as a group in August, 2019
J
Jenny P.
New Zealand
"The whole experience was great and everything worked like clockwork. Susan was helpful and very efficient in planning and organising the trip. She responded ..." read more
Traveled to Kenya solo in April, 2019

Misao J.
New York, United States
"Kenya Game Drives and Much More (December 8 – 22, 2018) Our family vacation to Kenya was exhilarating and surpassed our high expectations. Joseph Ngigi of ..." read more
Traveled to Kenya as a family in December, 2018

Virginia H.
California, United States
"Susan was very flexible and patient with numerous changes to our itinerary. She uses fabulous guides and booked wonderful lodges. Her expertise was invalua..." read more
Traveled to Kenya solo in October, 2018
E
Elizabeth G.
California, United States
"Everything was wonderful! Joseph was our guide and his knowledge of the area and animals was amazing. Wilson and William, our waiter and security to and fro..." read more
Traveled to Kenya as a couple in October, 2018