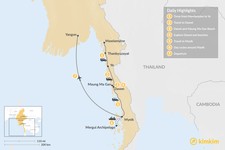 If the idea of combining stunning mountains and white sandy beaches into one trip sounds good to you, then this is your trip. The narrow southern region of Myanmar is a fascinating, largely uncharted place that combines farming villages, colonial history, and pristine islands.

The narrow southern regions of Myanmar are flanked by the Andaman Sea on one side and Thailand on the other, with farmland and mountains spread throughout. This tour takes you to some of the major towns of the area, full of colonial history, pristine beaches and the remote Mergui Archipelago. You'll get a chance to learn about the important industries of this region--fishing, rubber and betel nut--as well as relax on uncrowded beaches and snorkel off near-deserted islands. A lot of variety is packed into seven days, and you'll be introduced to a side to Burma that you probably hadn't imagined.

You'll get a chance to learn about the important industries of this region — fishing, rubber, and betel nut — as well as relax on uncrowded beaches and snorkel off near-deserted islands. A lot of variety is packed into seven days, and you'll be introduced to a side to Myanmar that you probably hadn't imagined.

From Mawlamyine, southeast of Yangon, depart for Thanbyuzayat. Along the way, you'll pass many villages that give an insight into rural life in Myanmar. Thanbyuzayet was the starting point of the “Death Railway”, constructed by the Japanese during WWII to connect Myanmar and Thailand over the River Kwai. Tens of thousands of POWs were used in its construction, and a large number of these died. Make a short stop to see the historically important remains of the station on the Burmese side of the border.

Continuing towards Ye, stop at “Banana Mountain”, an elevated point with a tower at the top, that offers views over the Ye Valley. After arriving in Ye, take a tour of the city, keeping an eye out for signs of the betel nut, rubber, and fishery production that is central to the local economy. You'll get the chance to learn more about these while in Dawei, after a couple of days.

Today you'll be driving through the stunning mountain range that divides the Tanintharyi Region and Mon State, on the skinny southern end of Myanmar.

Your next destination is Dawei, one of the first cities settled by the British after the First Anglo-Burmese War in 1826. As a result of its history, Dawei has some picturesque colonial-era buildings to check out. Take a walk along the riverfront to watch scenes of daily life, such as water collection from the public well. End the day by visiting Dawei’s Phaya Gyi Museum, which displays local artifacts, and the Shwe Taung Sar Pagoda.

Spend today exploring Dawei and its surroundings. Start by visiting a family-owned cashew nut business and see the labor-intensive process of gathering and peeling cashew nuts. You may understand why the nuts can be so expensive after seeing how only one nut grows per apple-sized fruit.

Afterward, head to the colonial neighborhood to learn more about the history of the colonial-era buildings. After lunch, head to the gorgeous, uncrowded Maung Ma Gan Beach, which is less than an hour's drive away. It's the perfect place to relax for the afternoon, before finding a spot to watch the magical sunset and enjoying a delicious meal of fresh seafood.

Today, head to nearby San Maria Beach, a secluded, uncharted place. Along the road through the countryside, you'll see numerous rubber trees. Rubber is one of the main products of the region, as well as fish and betel nuts, and you'll get to learn more about the important industries by visiting some factories.

Spend a couple of hours relaxing at this uncrowded beach: swim in the clear waters, go for a walk or just lie in the sun. Nobody will bother you here!

The road from Dawei to Myeik was closed to foreigners until recently, so today's long drive will be a particularly exciting one. Along the way, you'll get the chance to make several stops at villages where the locals will likely be very surprised to see you.

Myeik is located on an island in the Andaman Sea, just off the coast, so to get there, board a small local ferry. The city was once an important trade hub, as the East India Trading Company established a large port here in the early 17th century. From here, the items were transported overland to Thailand. The area is still known as a smuggling hub between Myanmar and Thailand. Enjoy a relaxing evening at a slower pace.

In the morning, set out to explore the Mergui Archipelago. In total, the archipelago comprises over 800 islands, inhabited by a sea-going people, and you'll experience a small part of this today.

Leave from Meik's Seik Nge Jetty and make a stop at a small fishing village. After cruising in pristine waters, reach a remote, uninhabited beach where you'll get the chance to enjoy some snorkeling. Explore the underwater world, lay on the beach or walk around the small island. A picnic lunch full of tropical fruits and refreshing coconuts will be served to you on the beach.

Day 7: Around Myeik and departure

Before your flight back to Yangon, you will have time to visit the docks in this important fishing town and see how traditional wooden boats are made. The boat builders are very skilled and continue to use traditional techniques.

Depart for Yangon later in the day.

Discover the eastern part of Myanmar, with its numerous breathtaking...

If local villages, meandering rivers, and spectacular vistas are your...

Discover Myanmar — a destination rich in culture with stunning scenery —...

Discover the best of Myanmar at a relaxed pace on this two-week...
Myanmar Tours & Itineraries

Make the Most of Your Time in Myanmar

How Many Days Should You Spend in Myanmar?

Two weeks is the perfect amount of time to explore Myanmar. If you have...

Even if you have less than a week to explore Myanmar, you can still...

Spend a week in Myanmar, and you can easily tour the highlights of two...

With ten days in Myanmar, it's possible to spend ample time in each of...

Travelers with two weeks in Myanmar can take a grand tour of the...
Make the Most of Your Time in Myanmar

Myanmar has three main seasons: the cool, the hot, and the rainy....

Myanmar is a land of sacred pagodas, deep-rooted traditions, and mile...

Myanmar may still be an up-and-coming travel destination, but certain...

Why Visit Myanmar? 5 Reasons To Go

Myanmar is quite unlike anywhere else in Southeast Asia or the world....

Myanmar is an amazing place to witness some of the most unique festivals...

Myanmar Cuisine: What To Expect

The people of Myanmar are incredibly friendly and welcoming. Meeting and...

January is one of the best times of the year to visit Myanmar. Weather...
Myanmar Travel Advice

Kimkim has selected the best Myanmar travel agents so you'll have a...

How Many Days Should You Spend in Myanmar?

Two weeks is the perfect amount of time to explore Myanmar. If you have...

Myanmar may still be an up-and-coming travel destination, but certain...

Get ready to experience the wonders of Myanmar. Featuring encounters...

Adventurous travelers looking for an extensive trip in Southeast Asia...

Myanmar and Thailand are two of the most exciting Southeast Asian...

This 19-day tour of Myanmar and Thailand has been especially designed...

Travelers with two weeks in Myanmar can take a grand tour of the...