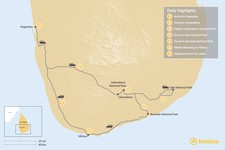 This seven-day Sri Lankan tour winds its way through three national parks full of wildlife and a coastline with the longest whale season in the world. Keep your camera and binoculars at the ready. Here you're likely to see sloth bears, elephants, leopards, flamingos, whales, and dolphins aplenty.

Welcome to Negombo - a built-up fishing town with a fascinating colonial past ripe with colonial clashes between the British, Dutch, and Portuguese and a thriving cinnamon export industry. Today, Negombo is alive with its own blend of culture and religions. Colonial-style architecture remains, like the Catholic church, but local traditions appear to have outlived the colonizers. When you arrive, check in at your comfortable guesthouse and take some time to explore the town.

After a hearty local breakfast at the guesthouse, head out for a morning at the vibrant Negombo fish market where you'll find not only a thriving fish trade, but also snake charmers who will charm a cobra for your photos for a small fee. Once you've had your fill of fish and cobra, pack your bags and catch your transfer to Udawalawe where a comfortable safari tent and a park full of big game like sloth bears, elephants, and leopards await.

Located on the boundary of Sri Lanka's wet and dry zones, Udawalawe National Park is one of the best places in the world to see wild elephants. With 400 elephants living in an area just under 77,000 acres, it's not unusual to see big herds gathering to feed and bathe by the waterholes. The park is also home to many water buffalo, water monitor lizards, sambar deer, and monkeys. Bird enthusiasts will be pleased with not only the variety but the quantity of avian species in the park. Spend your whole day safariing with a guide and keep your camera at the ready.

Rise early, pack your bags again, and hit the road for the wild, gorgeous Yala National Park. Located in the southeast region of the country and covering over 621 square miles, Yala is the second largest national park in Sri Lanka. It was designated as a wildlife sanctuary in 1900 and, along with Wilpattu, was one of Sri Lanka's first two official national parks. It's best known for its variety of wildlife and its important role in the conservation of Sri Lankan elephants, leopards, and aquatic birds. Once you check in, head out on a half-day safari to search for the park's famous wildlife.

Next stop: Bundala National Park! This fantastic maze of waterways, lagoons, and dunes that glitter like gold in the dying evening sun is home to thousands of colorful birds ranging from diminutive little bee-eaters to grand open-billed stalks. It is a wetland sanctuary of such importance that it has been recognized under the Ramsar Convention on Wetlands. It shelters some 150 species of birds, with many journeying from Siberia and the Rann of Kutch in India to winter here, arriving between August and April. It’s also a winter home to the greater flamingo, and up to 2,000 have been recorded here at one time. After your morning birding safari, it's time for another transfer - this time to Mirissa, where a comfortable resort awaits.

Welcome to the south coast of Sri Lanka, one of the very best places in the world to see Blue Whales. This area boasts the longest Blue Whale season anywhere in the world and there are plenty of Sperm Whale pods around as well. Start your day early and spend the whole morning on board a whale-watching boat. The whales here are on their annual migratory route, traveling from the Horn of Africa up to the waters of the Arabian Sea, and can be seen from November to April. Other species to keep an eye out for include Bryde’s Whale, Dwarf Sperm Whale, Spinner Dolphin, Striped Dolphin, and Indo-Pacific Bottlenose Dolphin.

After a morning of whale watching, head back to Mirissa for a leisurely afternoon. Spend your leisure time relaxing on the beach, having dinner in a beachfront restaurant, or getting a treatment at a local spa. Then head back to your cozy resort for a restful night before departure.

Enjoy a leisurely breakfast at your hotel and check out before noon to transfer to Bandaranaike International Airport, about three hours away.

Dineia P.
United Kingdom
"We had plan to visit Sri Lanka this year, however after the events at Easter time we almost gave up this trip. We are glad we have done it. Just spend 2 week..." read more
Traveled to Sri Lanka as a couple in October, 2019
Create your custom-made trip to Sri Lanka
Get Started