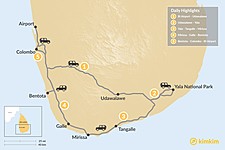 This five-day mini-tour highlights the remarkable wildlife and pristine beaches of Sri Lanka’s Central and Southern Provinces. Start your journey on safari in Udawalawe and Yala National Parks, where you’ll spot elephants and leopards against a background of lush highlands. Next, you’ll head down the coast to the golden sands and turquoise waters of Mirissa and Bentota, before spending your final day in the vibrant capital of Colombo.

Day one takes you directly into the heart of the spectacular Udawalawe National Park. Located on the boundary of Sri Lanka's wet and dry zones, the park’s geography and climate make it a haven for rare wildlife. Upon your arrival, transfer directly from Bandaranaike Airport, settle into your nearby accommodation,  and head out on safari to explore the remarkable biodiversity of your surroundings.

Home to over 400 elephants, Udawalawe is considered one of the best places in the world to see the animals in the wild, with large herds often gathering to feed and bathe at waterholes. While elephants are the star attractions, you’ll also spot water buffalo, water monitor lizards, sambar deer, and monkeys, as well as a remarkable variety of exotic birdlife.

Start your morning with feeding time at the  Udawalawe Transit Home.  Founded to rescue and raises calves orphaned by the elephant-human conflicts in Sri Lanka,  the transit home provides food and medical care until the calves are robust enough to be released into the wilderness. Watch as the playful calves are bottle-fed and cared for during their morning ritual, and learn about the work that goes into protecting and raising these remarkable animals.

Sunrise is the best time for leopard-spotting, so use your last morning in Yala to venture out on another early safari and watch for these rare and elusive creatures. With one of the densest populations on the planet, Yala offers you an excellent chance of seeing leopards up close—particularly young, confident males who prowl the park's dirt roads.

After breakfast, you’ll bid Yala farewell and travel south along the coast to Mirissa. Surrounded by coconut plantations and ancient temples, this idyllic fishing village is a paradise of pristine beaches and brilliant blue sea. Spend the afternoon whale watching (the temperate waters are home to Blue, Bryde's, and Sperm Whales) then relax at one of the resort’s many beachfront restaurants, watching the sunset over the Indian Ocean.

Today you’ll continue west along the coast, stopping first at the bustling provincial capital of Galle. Overlooking the exquisite circular cove of Unawatuna Bay, it's known for the atmospheric 17th-century Dutch fort that serves as its old town.

End your day at the laid-back beach resort of Bentota. Calm waters and miles of pristine golden sand make this former fishing village on Sri Lanka’s west coast a favorite holiday playground. Bentota is famous for its watersports: try your hand at scuba diving, deep-sea fishing, or windsurfing on the Laccadive Sea.

Your final day incorporates a melting pot of culture and commerce in the lively capital of Colombo. Buddhist Temples and Hindu Kovils are scattered throughout the city, reflecting the diverse religions and customs of Colombo’s residents. Drive through the city's commercial center known as the “Fort,” where grand colonial-era buildings stand alongside modern office structures. Explore the vibrant markets and bazaars in Pettah, and discover the National Museum with its beautiful collection of antiques and art.

After lunch, it’s time to transfer to the airport, where you’ll bid Sri Lanka ‘ayubowan” and catch your flight home.

Dineia P.
United Kingdom
"We had plan to visit Sri Lanka this year, however after the events at Easter time we almost gave up this trip. We are glad we have done it. Just spend 2 week..." read more
Traveled to Sri Lanka as a couple in October, 2019

José B.
Brazil
"I didn't have any expectations about it, and the whole trip surprised me, specially my driver: what a good mood, i have to say. Since we had to drive for sev..." read more
Traveled to Sri Lanka solo in October, 2019
Plan your trip to Sri Lanka
Customize your trip with help from a local travel specialist
Plan Your Trip