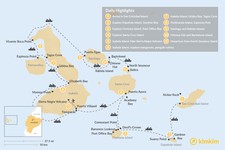 Cruising around the Galapagos Islands — viewing extraordinary wildlife and natural sights by day while motoring between islands at night — is one of the best ways to experience these magical islands. On this tour, you'll visit 11 islands in the famed archipelago, observing birdlife, sea lions, marine iguanas, sharks, giant tortoises and an array of other creatures.

This 11-day cruise is a perfect excursion for those wanting to maximize their time on the Galapagos Islands. You'll experience around a dozen islands, although some of these are quite small, such as Chinese Hat and Bartolome. Meals are covered as part of the cost of the tour and you'll overnight in a comfortable cabin.

This itinerary includes a hike up Sierra Negra Volcano,  a tour of the Charles Darwin Research Center and spottings of the famed giant tortoises. It also includes some lesser-known sights and activities, such as the unusual Rábida Island, which has a Mars-like rocky surface. Snorkeling is one of the main activities you can do during on-shore stops, as well as hiking and wildlife photography.

The journey begins with a flight from Quito to San Cristobal Island, the easternmost island in the chain. The first stop you'll make is the interpretation center and Tijeratas Hill. The interpretation center explains the history and significance of the islands, with exhibits on biology and ecology. There are a number of marked trails that wind around the hills. You’ll get excellent views up the coast and other islands offshore including Kicker Rock (also known as León Dormido), the towering remains of a volcanic cone.

Next, you’ll travel by boat to Suarez Point on Española Island (Hood), a classic shield volcano that is one of the oldest islands in the chain at 4 million years. At Suarez Point, a trail winds for 2 km through colonies of blue-footed boobies, marine iguanas and other animals. Albatross can be seen here from late March to early December. You’ll visit a natural blowhole in the rocks shoots water more than 50 ft. in the air when the waves come crashing in. Then, at Gardner Bay, swim and observe sea lions and sharks.

Next stop is Floreana Island. Here you’ll visit Cormorant Point, the best flamingo lagoon in the Galapagos. Then you'll continue to the Devil’s Crown, an almost completely submerged volcano and excellent site for snorkeling. You’ll also visit Post Office Bay, made famous for the wooden barrels once used by whalers in the 18th century to send mail home. Still today, passing visitors are encouraged to take the postcards with them to post in their home countries.

The final stop on Floreana is Baroness Lookout, where you'll get an impressive panoramic view of Floreana. The lookout is named after Baroness Eloise von Wagner, who left her life in Paris to live on the island with her two lovers in the 1930s. The Baroness was known for carrying a revolver and whip and called herself the Pirate Queen of the Galapagos. In 1934 she and one of her lovers mysteriously vanished from the island.

On Santa Cruz Island, the second-largest island after Isabela, you’ll visit the Charles Darwin Research Station located on the shore of Academy Bay in the village of Puerto Ayora. Opened in 1959, the station is a base for scientists to conduct their work on the islands and you'll have an opportunity to learn about their conservation efforts.

You'll also spend time at a tortoise breeding center and learn how these animals are prepared for life in the wild. There is excellent bird watching opportunities on the island and there will be good opportunities to spot the unique Vermillion flycatcher, known for its bright orange color. Lava tubes, sinkholes and craters can also be explored during our visit to the island — one lava tube is over 2000 m long!

You’ll sail next to Isabela Island. Named after Queen Isabela of Spain, this is the largest in the chain, four times larger than Santa Cruz Island. However, it is one of the younger islands, at just 1 million years old. The island is home to more wild tortoises than any other island, and due to the topography of the island, several sub-species developed.

You’ll start the day with a brisk hike up Sierra Negra Volcano, the world’s second-widest crater rim. This will be followed by a visit a tortoise breeding center.  You’ll then visit the town of Puerto Villamil, followed by Tintoreras, small islands where you’ll spot wildlife including sea lions and reef sharks.

You’ll observe birds at the mangroves of Moreno Point on Isabela. A first take the point looks like a lifeless lava flow, but upon closer inspection, you'll find a number of lagoons that provide a home for birdlife, including flamingoes. Then you'll take a panga at Elizabeth Bay to a penguin colony at Marielas Islets. There are good opportunities for snorkeling here. The panga ride continues to a mangrove where it’s possible to spot sea turtles, rays and pelicans.

Today you'll go ashore on the western side of Isabela. You'll make a wet landing at Urbina Bay, where you’ll spot turtles, rays, marine iguanas, and penguins. Flightless cormorants, birds that can swim but cannot fly, are also found here. You'll do some walking to Alcedo and Darwin volcanoes for more wildlife spotting. You’ll continue by panga to Tagus Cove to spot more birds and then walk along the cliffs to get views of Darwin Lake.

Fernandina Island (also known as Narborough Island), the third largest island in the archipelago, is your next destination. This island is an active shield volcano that has been erupting since 2009. In 1968, part of the caldera collapsed, dropping 350 m to the floor of the volcano.

You’ll spot wildlife all around the island for a day, including Espinoza Point, which is known for its large number of marine iguanas and flightless cormorants. Next, you’ll visit the cliffs along Vicente Roca Point, an excellent place for diving. The cliffs contains an underwater passage that opens up to hidden cove inhabited by sea lions.

You’ll continue to Puerto Egas on Santiago Island for a day. This Island is known for its black-sand beaches and grottoes which are home to seals and herons. Just off the coast of Santiago is tiny Rábida Island, which you will visit to experience the red, rocky landscape. The red color of the rocks is due to oxidation that occurred when the island was formed. The beaches here attract plenty of birdlife, including flamingoes.

The day starts with a visit to Chinese Hat, an islet off the coast of Santiago, which gets its names from its shape, similar to a Chinese fisherman’s hat. Colonies of marine iguanas and penguins can be spotted here.

You’ll then travel to Bartolome Island, where you can climb to the 114 m high summit for great views. Snorkeling is possible here, amid multicolored fish and penguins, at the spectacular Pinnacle Rock. At another beach on Bartolome Island (where swimming is forbidden) you'll have a chance to see white-tipped reef sharks.

North Seymour Island is the final stop on this tour. The island is home to nesting frigate birds and blue-footed boobies. Sea lions can also be seen playing the surf. North Seymour is located just north of Baltra, which has a small airport where you will take your flight back to the mainland.

This whirlwind trip takes you to many of Ecuador's top highlights in a...

Make the Most of Your Time in Galapagos Islands

With ten days to spend in the Galapagos Islands, you could opt for a...

Consider yourself lucky if you have two weeks to spend in the Galapagos...
Make the Most of Your Time in Galapagos Islands

Family Travel in the Galápagos Islands

The Galápagos Islands comprise one of the world's most extraordinary...

January is one of the best times to visit the Galápagos Islands, thanks...

February is a festive month in the Galápagos Islands, with Ecuador's...

The Galapagos Islands are a diverse set of islands off the coast of...

White-sand beaches, secluded lagoons, and a spectacular array of...

Underwater Adventure in the Galapagos - 5 Days

This adventurous 5-day itinerary is a diver's delight! The Galapagos...

Consider yourself lucky if you have two weeks to spend in the Galapagos...

S
Stuart K.
Florida, United States
"Astrid was a terrific local guide and so knowledgeable. The various islands were great choices." read more
Traveled to Galapagos Islands as a couple in January, 2023

Allison C.
Oregon, United States
"Alvaro was a super specialist! We've never worked with a planner before and always did our own travel planning. Ecuador and the Galapagos seemed a little dau..." read more
Traveled to Galapagos Islands as a couple in December, 2022

Barb M.
Michigan, United States
"We could not have been happier with the service we received from the kimkim team! Lucia and Angel responded immediately to our questions before and during ou..." read more
Traveled to Galapagos Islands as a couple in December, 2022

Rahul N.
Georgia, United States
"Alavaro did a great job with organizing our much awaited trip to the Galapagos. He took the time to understand our wish list before recommending options and ..." read more
Traveled to Galapagos Islands as a family in December, 2022

Hillary P.
New York, United States
"All of our local guides and experts were extremely knowledgeable, helpful, and quick to respond with help and recommendations. In our relatively short trip, ..." read more
Traveled to Galapagos Islands as a couple in December, 2022

Michal G.
Maryland, United States
"Alvaro, Daniela, and Daniel did an outstanding job with the planning and execution of our trip to Ecuador (Quito and the Galápagos Islands). They were availa..." read more
Traveled to Galapagos Islands as a group in November, 2022

Stephanie C.
Canada
"The Galapagos islands were my number one travel destination, but the idea of planning and organizing a trip was a bit complicated so I reached out to KimKim ..." read more
Traveled to Galapagos Islands as a couple in November, 2022
Create your custom-made trip to Galapagos Islands
Get Started