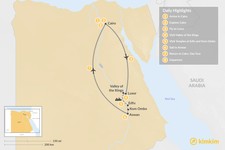 Explore Egypt on a luxurious Nile River cruise as you visit Cairo, Luxor, and Aswan. Highlights will include visiting the Pyramids of Giza, seeing art and artifacts at the Egyptian Museum, and Karnak Temple in Luxor. As you cruise down The Nile, you will also have time to relax and take in the scenery.

Arrive in Egypt's capital — one of the largest cities in Africa and in the Middle East. Your tour coordinator will meet you at Cairo International Airport and escort you to your hotel by an air-conditioned vehicle. After check-in, you will be free to relax for the evening before starting your tour the next day.
For dinner, you can explore, to try authentic Egyptian local cuisine.

Day 2: Cairo: The Egyptian Museum and The Great Pyramids Of Giza

After breakfast at your hotel in Cairo, you'll meet your Egyptologist who will accompany you on your day exploring the city and its sites. Activities will include:

After breakfast, your tour coordinator will assist you with your transfer to catch your short flight from Cairo to Luxor — a small city in the Nile Valley located 420 miles (676 km) south of Cairo. Once you arrive in Luxor, you will make your way to your cruise ship and then your guide will show you to the major sights in Luxor including:

Day 4: Luxor and Valley of the Kings

You'll continue your Nile cruise by seeing sights on the river's west bank. Your guide will lead you through a tour and activities might include visiting:

The next stop on your Nile cruise will be to see the temples at Edfu (115 km or 71 miles from Luxor) and Kom Ombo (63 km or 39 miles from Edfu). There, your guide will explain the significance of the temples:

Your adventure continues as you set sail for Aswan. In Aswan, you will have a chance to get off the ship and explore more sights along with your guide, including:

From Aswan, your tour coordinator will assist you to catch your flight to Cairo (the distance from Aswan to Cairo is  (538 miles or 867 km).
After check-in at your Cairo hotel, you can explore, take in the last sights, and enjoy an authentic Egyptian dinner on your own.

After breakfast, you'll make your way to Cairo International Airport for your flight home.

Jewels of The Nile: Cairo, Luxor, and Aswan - 8 days

Explore Egypt on a luxurious Nile River cruise as you visit Cairo,...

On this eight-day cruise, you'll have time to marvel at the wonders of...

Anchored in Cairo, this five-day trip offers exploration of all the best...

On this 10-day tour of Egypt, enjoy the sites by land and sea. Begin in...

On this weeklong tour of Egypt, explore two regions: Cario and Sharm El...

Anchored in Cairo, this five-day trip offers exploration of all the best...

On this 10-day tour of Egypt, enjoy the sites by land and sea. Begin in...

You will arrive in Cairo, where you'll explore the pyramids and Egyptian...

You'll start your trip in Cairo—where you'll visit the Pyramids of Giza...

This cultural tour will start in Cairo, where you'll explore the...

Kelly F.
California, United States
"What can I say? This trip was truly magnificent and everything I dreamed Egypt would be. Safe, secure and incredibly tailor made just for us. The customer se..." read more
Traveled to Egypt as a couple in November, 2020

Ioana T.
Switzerland
"Ibrahim and his team organized a custom 4 day trip for our family of 5 (myself, husband and children ages 17, 10, 10)--pick-up from Hurghada, then Luxor 2 da..." read more
Traveled to Egypt as a family in September, 2020
S
Sara P.
Utah, United States
"I had pretty much planned out my trip to Egypt and Jordan on my own, when I decided to contact kimkim to see what assistance might be available. I had used..." read more
Traveled to Egypt as a couple in February, 2020

Min K.
Texas, United States
"My partner and I had a great time in Egypt and Jordan. I was very particular on the itinerary and Ibrahim accomodated everything. It was a tad bit difficult ..." read more
Traveled to Egypt as a couple in November, 2019