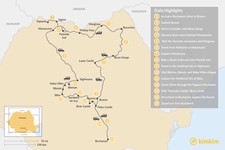 There is so much to see in Romania, and this two-week trip offers a glimpse into a country and culture where the people's connection to nature runs deep. Explore charming medieval towns, visit the castle that inspired the location of Bram Stoker's "Dracula," and take a steam train ride through the countryside. You'll discover authentic villages straight out of a fairy tale, jaw-dropping landscapes, and carefully preserved traditions.

Day 1: Travel from Wallachia to Transylvania

Your trip starts in the capital city, Bucharest. Upon your arrival, you'll travel on a medieval route linking the regions of Wallachia and Transylvania. Stop in at Peles Castle, a striking Neo-Renaissance palace set in the idyllic Carpathian Mountains. Peles was once the summer residence of the Romanian royal family. From there continue on to picturesque Brasov in Transylvania, where you'll spend the night in the city center.

Today you'll explore the city of Brasov, which was founded in the 13th century when Teutonic Knights were sent by the Hungarian king to fortify the border. Throughout the Middle Ages, Transylvania was part of the Kingdom of Hungary, and was repeatedly invaded by various groups. You'll visit the fortified Prejmer Church, which is surrounded by a wall nearly 40 feet (12m) high and 13 feet (4m) thick. The walls include 270 rooms for the villagers to take shelter during attacks and storehouses for grain. You'll spend a second night in Brasov.

This morning you'll travel to Lazarea, a quaint village in the Szekély region at the foot of the Eastern Carpathian Mountains. Here you'll visit the Renaissance-style Lazar Castle, built in 1450. You'll also have the opportunity to admire the large Franciscan monastery in the village. Then you'll visit the Red Lake, whose reddish tint comes from iron deposits, and pass through the impressive vertical limestone walls of the nearby Bicaz Gorge. Stroll along the path by the Bicaz River and check talk to the local artisans who sell their products there. You'll spend tonight in a guesthouse by the lake.

Today you'll continue driving through the Carpathian Mountains to the lovely pastoral area of Bucovina in northern Romania's Moldavia region. Here you'll discover brightly painted monasteries decorated with 15th and 16th-century frescoes. Listed as a UNESCO World Heritage Site, the colorful exterior walls of the monasteries feature religious imagery and are considered Byzantine masterpieces of art. They are the only churches of their kind in Europe, and you'll visit three of them: Humor, Moldovita, and Voronet, known as the "Sistine Chapel of the East." Stay the night in a guesthouse in the village of Vatra Moldoviței, where Moldovita is located.

This morning visit another jewel of Bucovina, the Sucevita monastery, before continuing to the village of Marginea. It was once a major pottery center of Europe, famous for its black ceramic. You'll visit the workshop of one of the remaining pottery masters, before continuing on to the Cacica Salt Mine. This fascinating mine was manually dug out and opened in 1791. Inside you'll discover a chapel, a ball court, and a saltwater lake built for the miners who worked there. Spend a second night in Vatra Moldoviței.

Day 6: Travel from Moldavia to Maramures

You'll leave Moldavia and make your way towards Maramures this morning. On the way, stop at Prislop Pass, Romania's highest pass at an elevation of 4,645 feet (1,416m) for absolutely breathtaking views of the mountain landscape. In Maramures you'll visit centuries-old wooden churches, some of which are UNESCO-listed. Explore the intricate wood work produced by master craftsmen, whose knowledge has been handed down from generation to generation. Rest for the night at a guesthouse in the bucolic villages of Breb or Botiza.

Today you'll continue exploring Maramures. Start in the village of Sapanta, known for its brightly colored "happy cemetery." Each grave has a painted wooden and steel monument that vividly describes the life of its owner. Continue on to The Memorial of the Victims of Communism and of the Resistance in Maramures' medieval capital, Sighet. The museum is located in a former political prison, and tells the story of darker times in Romanian history. From there you'll go to the stunning Barsana monastery, featuring traditional craftsmanship and towering wooden spires amid a backdrop of rolling hills. Spend the night at a Botiza guesthouse.

On your last day in Maramures, climb aboard Romania's last working steam train! Enjoy the views of the wild forests on your ride around the countryside, and keep an eye out for bears, wolves and even lynx. End the day with a visit to another UNESCO-listed wooden church, Poienile Izei, or take it easy and relax in the village.

Today you'll travel to the medieval city of Sighisoara in Transylvania. Known as one of the best-preserved citadels in Europe, you'll travel back in time as you walk through the narrow cobbled streets with brightly-colored houses. The towers that protected the town are among the most impressive architecture of Sighisoara. Each tower was managed by a powerful group of artisans, and the Tailors' Tower is considered to be the most beautiful. Stay the night in a small hotel inside the citadel.

Spend the day exploring fortified churches in the heart of Transylvania. From the top of the towers, you'll have sweeping views of the surrounding countryside and its traditional colorful houses that make for postcard-pretty landscapes. Visit villages like Biertan, which has a double wall fortification, and Slimnic, which contains the ruins of a medieval fortress of its own. Take a guided tour around the charming 13th century village of Valea Viilor, which is home to a massive fortified church with walls five feet (1.5m) thick. Tonight you'll stay in a hotel in the city of Sibiu, or in a guesthouse in the village of Sibiel.

Sibiu is the most beautiful city in Transylvania, full of amazingly well-preserved and restored medieval architecture. The city has a rich cultural history in music and theatre, and was elected the European Capital of Culture in 2007. Take in the city's seductive bohemian vibe as you walk around, and watch out for buildings with windows that look like eyes, a la Amityville Horror. After exploring the city, check out the open-air ASTRA National Museum Complex just outside the city. There you'll find windmills, a wooden ferry, and hundreds of other structures and artifacts representing the traditional folk culture of Romania. Choose to stay in a hotel in Sibiu or a guesthouse in Sibiel for the night.

Go on a scenic drive through Romania's tallest mountains, the Fagaras. On your way, stop in at Sambata de Sus, the only monastery in Transylvania built in a Wallachian style, and at the impressive ruins of a 12th-century Franciscan monastery in Carta, said by some to be haunted by the medieval monks who lived there. Then learn a traditional way to process wool using hydraulic power at La Valtori in the village of Lisa, and visit the oldest water mill in the region in Ohaba. End your day with a drive to the foothills of the Piatra Craiului Mountains amid small villages that have preserved their pastoral traditions for centuries. The pastures and ancient forests are perfect for exploring by foot.

Today you'll set foot in Romania's most famous fortress, Bran Castle. Believed to be one of the inspirations for Bram Stoker's depiction of the home of his title character, Count Dracula, Bran is commonly called "Dracula's Castle." In real life, the dwelling once belonged to Queen Marie of Romania, a granddaughter of England's Queen Victoria.

From there you'll continue on to Rasnov, a 13th-century citadel built to protect Transylvania from an onslaught of Turkish attacks. Set on a hilltop, Rasnov offers wonderful views of the valley below. In the afternoon, take a long walk through mountain villages starting in Magura. Many residents here still lead traditional lifestyles as livestock breeders or shepherds. Rest your legs for a second night in the guesthouse by the Piatra Craiului Mountains.

You'll leave the countryside today and head back to Bucharest. This city will surprise you with its mix of 18th and 19th-century architecture, communist-era "blocks," and modern buildings. Tour the gigantic Palace of Parliament, the second biggest administrative building in the world after the Pentagon. Relax in one of the pretty green parks, or hang out in the trendy cafes of Old Town. Bucharest is famous for its amazing nightlife, so in the evening put on your dancing shoes and head out to the bars and clubs. You'll spend the last night in the city center.

After breakfast, say goodbye to lovely Romania. Catch a transfer to the airport for your departing flight. 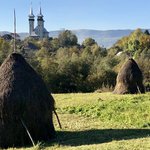 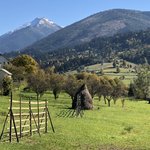 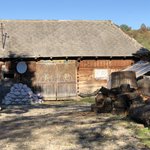 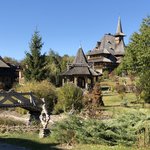 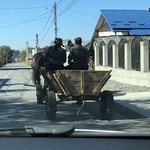 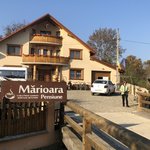 See the best of Romania on this leisurely 15-day tour around the...

Romania and Bulgaria are home to a range of historic sites that have...

January is mid-winter in Romania and that means very cold temperatures...

February is mid-winter in Romania and temperatures are cold. But if you...

March in Romania sits between winter and spring, and visitors may...

April is spring in Romania and the shoulder season between the quiet,...

May is shoulder season in Romania, with warmer weather and a range of...
Romania Travel Advice

December is mid-winter in Romania, and that means cold temperatures and...

November is the start of winter in Romania and not generally a popular...

October is fall in Romania and the start of the low season. However, if...

September is late summer/early fall in Romania, and this means it's...

August is midsummer in Romania and a busy time to visit. The weather is...

Ronald D.
the Netherlands
"What was supposed to be a one-week hiking trip in Transylvania in the spring of 2020 ended up to be a great multifaceted three week trip through the entire c..." read more
Traveled to Romania solo in August, 2021

Bayard T.
New Hampshire, United States
"Our 15 day, self-drive tour of Romania was exceptional! Raluca and her team put together a terrific itinerary which brought us to a wide range of scenic, hi..." read more
Traveled to Romania as a couple in October, 2018
Create your custom-made trip to Romania
Get Started