Get away from the crowds and experience Holland's finer things on this 5-day luxury tour around the Netherlands. Explore the smaller cities of Leiden, the Hague, and Delft, featuring classic Dutch attractions like picturesque canals, cobblestoned streets, world-class art museums, beautiful churches, historic windmills, and lovely squares lined with outdoor cafés. You'll stay in high-end hotels, including a landmark five-star hotel at the beach, a boutique hotel, and a hotel with its own Michelin-starred restaurant. Day-trip to Amsterdam for a boat tour, pedal to the coast on a self-guided bike tour, dine on fresh seafood, view Van Gogh originals up close — this short but sweet adventure has something for everyone.

Day 1: Visit a Fishing Village & the Windmills at Zaanse Schans 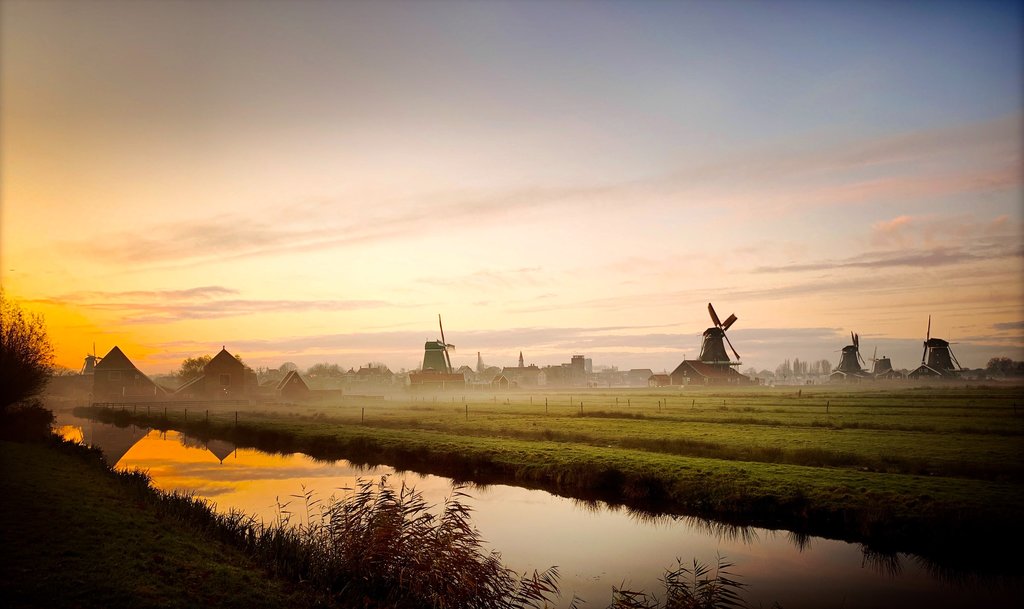 Welcome to the Netherlands! Your adventure begins in the Dutch town of Monnickendam, where you'll stay in a luxury hotel, Suitehotel Posthoorn, with its own Michelin-starred restaurant.

Begin the day's activities in the picturesque village of Marken, located on an island on Markermeer Lake. Explore the small town and visit a wooden shoe factory before catching the ferry to Volendam, Holland’s best-known fishing village. The quaint harbor is lined with cafés and fish vendors. It's a good place to sample local treats like kibbeling (traditional battered and fried fish nuggets). Next, your guide will take you to visit the centuries-old cheese market area in Edam. The market happens on Wednesdays in July and August, but the market square and waag (weigh house) itself are very much worth a visit even outside those times.

The last stop on your tour today is Zaanse Schans. During the 17th century, over 600 windmills were constructed in the area as part of an early industrial zone. The windmills were used to grind spices, produce paint and oil, and cut wood. A number of these windmills still exist and can be visited today, inside and out.

Return to Monnickendam for a memorable meal and a relaxing overnight stay.

From Monnickendam, it only takes about half an hour to reach the center of Amsterdam and its amazing labyrinth of canals and small streets, dotted with old houses and buildings. The city's downtown is pretty small, so most places can be easily reached on foot, on a boat, or on a bike.

You'll start exploring Amsterdam with a visit to the Anne Frank House. Learn about the famous story of a young Jewish girl who lived here during the Second World War; the museum is built around the secret annex where she and her family hid for over two years.

Several other museums are nearby. Travel by boat to the Rijksmuseum. This is the most famous museum in the Netherlands, housing the country’s most famous painting, The Night Watch by Rembrandt van Rijn. Besides this masterpiece, you can see The Milkmaid by Johannes Vermeer, plus many other 17th-century works by Dutch Master painters. Right next to the Rijksmuseum, you will find another Dutch highlight: the Van Gogh Museum. The Dutch post-Impressionist painter created more than 2,000 paintings in just over a decade. Later, take a stroll through the picturesque neighborhood of the Jordaan and stop to have dinner there.

After indulging yourself in the highlights of Dutch art, it’s time to leave the hustle and bustle of the capital. Your driver will take you back to your hotel in Monnickendam.
Plan your trip to The Netherlands
Chat with a local specialist who can help organize your trip.
Get Started

Day 3: Wander Around the University City of Leiden

After breakfast, your driver will take you to the charming city of Leiden. A university city, it's full of wonderful museums, scenic canals, and inner courtyards lovingly called hofjes. The town center itself is gorgeous and busy with bicycles; Leiden University, founded in 1575, is the oldest university in the country. Visit the Lakenhal Museum, offering a collection of paintings from the past four centuries, including several works by Rembrandt. Or choose to visit the nearby Museum of Archeology or Museum of Ethnology, the Museum Boerhaave (focused on science and medicine), Naturalis (a museum dedicated to flora and fauna), Corpus (with exhibits on the human body), Hortus Botanicus Leiden (a botanical garden), or the unique Museummolen de Valk (a windmill museum). Stop for lunch in a local café. You'll spend the night in a boutique hotel, Huys van Leyden.

Day 4: Explore the Seat of Government & Cycle to the Beach

After breakfast, take a quick train ride to your next destination, The Hague. Known to the Dutch as Den Haag, it's the seat of the Dutch government and home to one of the most magnificent paintings in the country, Johannes Vermeer's Girl with a Pearl Earring. You'll have a chance to view it in person while visiting the Mauritshuis. The museum features a few of the 37 paintings Vermeer created during his life, as well as works by Rembrandt, Jan Steen, and Frans Hals.

After your museum visit, you'll hop on an e-bike and pedal around the neighborhood. Ride over to The Binnenhof, headquarters of the Dutch government, taking advantage of the city's excellent infrastructure of safe and flat cycling lanes. Once you're warmed up, it's time for a cycling trip to nearby Scheveningen Beach.

You'll spend the evening in a magnificent 5-star hotel, Grand Hotel Amrâth Kurhaus. The beachfront hotel, built in 1818, is a symbol of luxury. Get a massage at the spa, go for a walk on the beach, and dine on fresh seafood for dinner.

Today, you'll head back to Amsterdam, where the trip ends. Along the way, you'll stop in Delft, a charming city full of quaint canals and monumental buildings. The great painter Johannes Vermeer lived here in the 17th century. Visit the Vermeer Center, where you can see reproductions of his work and tour his studio, then stop into nearby workshops where the world-famous blue and white Delft Blue pottery is made. First introduced as a cheap alternative to Chinese porcelain, it's still produced according to age-old techniques.

After lunch, you'll transfer to the airport in Amsterdam to catch a flight out. Safe travels!

Looking for more inspiration for your trip to the Netherlands? Check out these other Netherlands itineraries, with outdoor adventures, cultural trips, and best-of tours to hit the highlights.

This itinerary is all about flowers! In just five days, you will cycle...

This enlightening 5-day journey will take you to the highlights of...

Family Tour of The Netherlands - 5 Days

Filled with outdoor adventures and cultural highlights, this...

Experience the best Holland has to offer! The picturesque yet...
The Netherlands 5-Day Tours & Itineraries

Holland's scenic landscapes draw crowds from all over the world. On this...

Experience the best Holland has to offer! The picturesque yet...

Off-the-Beaten-Path Luxury in the Netherlands - 5 Days

Get away from the crowds and experience Holland's finer things on this...

Cycling Tour of the Netherlands - 7 Days

There's no need to choose between Holland and Flanders (the...

Experience the best of Holland along with some of its hidden gems on...

Family Tour of the Netherlands - 10 Days

Welcome to the perfect family destination — Holland! On this 10-day...
The Netherlands Tours & Itineraries

Make the Most of Your Time in the Netherlands

14 Days in the Netherlands - 5 Unique Itineraries

With two weeks to spend, many travelers opt for a tour of the...
Make the Most of Your Time in the Netherlands

If you like the idea of having some of Europe's finest art galleries and...

February is the final month of winter in the Netherlands, so the weather...

March is the end of winter and beginning of spring in the Netherlands,...

April is peak season for travel to the Netherlands, with mild spring...

The Netherlands in May: Travel Tips, Weather, & More

Kimkim has selected the best The Netherlands travel agents so you'll...

With weather that alternates between autumnal and wintery, November...

October is mid-autumn in the Netherlands and a shoulder season for...

Best Time of Year to Visit the Netherlands

A country that can be visited any time of year, the Netherlands is best...

Explore the History of Water in the Netherlands - 5 Days

A significant portion of the Netherlands is below sea level, so the...

Immerse yourself in the seafaring history of the Dutch Golden Age on...

Barbara H.
Virginia, United States
"We only had 4 nights in the Netherlands, but Mieke put together a great itinerary that made the most of our limited time. From the bustling pace of Amsterda..." read more
Traveled to The Netherlands as a couple in August, 2022

Sarah L.
Pennsylvania, United States
"Working with Mieke was great. She offered cool and interesting suggestions such as the Upside Down which turned out to be a really fun activity for our fami..." read more
Traveled to The Netherlands as a family in May, 2022

Anthony K.
Florida, United States
"Had a great trip that Mieke had only a short time to prepare for us due to our cruise cancelling at last minute. Very easy to work with and great communicat..." read more
Traveled to The Netherlands as a couple in April, 2022
J
John T.
Australia
"From start to finish, Mieke and Sebastian were amazing. They helped us shape our itinerary, provided the travel passes and all the local insight we needed fo..." read more
Traveled to The Netherlands as a family in April, 2022

Karen P.
Ohio, United States
"Our trip was amazing and Mieke was fabulous! We had fabulous experiences that we would not have had without her. I highly recommend allowing her to schedule ..." read more
Traveled to The Netherlands as a family in March, 2022
Create your custom-made trip to The Netherlands
Get Started