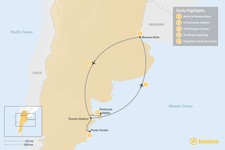 Experience the wildlife of Argentina on this 5-day adventure. Begin your adventure in the cosmopolitan capital city of Buenos Aires. Next, head south to Puerto Madryn, a seaside community in Patagonia famous for its diverse ecosystem featuring many unique birds and marine mammals. Here, you'll take in the stunning scenery and wildlife while visiting a penguin colony and going a whale watching excursion.

Today our private transport will pick you up from your hotel and take you to Aeroparque Airport, located near the city center, for your flight to Puerto Madryn. This is the gateway to Argentine Patagonia.

Puerto Madryn sits on the Golfo Nuevo (New Gulf), on northern Patagonia's Atlantic shore. The waters immediately offshore of this city are home to an abundance of marine mammals, including the southern right whale, which breeds in the area from May to December.

Puerto Madryn is most famous for being the gateway to nearby Península Valdés, a UNESCO World Heritage Site and the best place to view a variety of animals in their natural habitat, including sea lions, penguins, guanacos, whales, and orcas. Also near to Puerto Madryn is Gaiman, a small historic town founded by Welsh settlers in 1875. Gaiman has preserved many of its Welsh traditions, which is evident in the tea shops, chapels, and gardens found throughout town.

Upon arrival at Puerto Madryn, a driver will meet you and you'll transfer to the hotel.  If you have the energy after your flight, feel free to stretch your legs with a stroll around this tranquil city. It's a safe, walkable community and there is a charming waterfront promenade here lined with cafes and restaurants with patio seating and ocean views. You can also make the short trip to Gaiman and enjoy a spot of afternoon tea.

Today you will embark on a tour down the Atlantic coast that culminates in one of the most incredible destinations in Patagonia: Punta Tombo. This tiny protected area (just 0.8 square miles), is home to the largest colony of Magellanic penguins in Latina America.

A driver will meet you at your hotel and transfer you to Puerto Rawson, a fishing village located about 50 km (31 miles) south of Puerto Madryn. Here you will board a ship and start the tour. As you head down the Patagonian coast, be sure to keep an eye out for black-and-white-colored Commerson dolphins, which are regarded as the smallest dolphin species in the world.

The tour will continue down to Punta Tombo, where you'll find the aforementioned penguin colony. Exact estimates of how many Magellanic penguins live here vary, but keep this whopper of a stat in mind: at one point it was home to over a million. The population might be near that figure even today, as everywhere you look you'll find penguins, penguins, and more penguins. You'll even be able to tour the area on foot and stroll alongside these waddling critters. As you walk, you'll almost be able to reach out and literally touch them, such as the density of their population (but alas, this is not allowed ).

Afterward you'll transfer back to your hotel.

Today a driver will pick you up at your hotel for your journey to Península Valdés. The first stop will be at the Istmo Ameghino Interpretation Center, which will act as a useful primer for your foray into this unique eco-system. Through various educational exhibits, you'll gain insight into the different types of fauna that call the peninsula home. There's even a lookout tower here featuring stunning views of the Golfo Nuevo and the Golfo San José.

After visiting the interpretation center you'll continue to Puerto Pirámides. This is the embarking point for today's oceanic wildlife-watching excursion. After boarding the ship, it will sail along the coast and offer many opportunities for wildlife spotting. Keep your eyes peeled for sea lions and (if you're lucky) right whales and killer whales. You'll even pass a local lighthouse that epitomizes all the seafaring splendor and rugged coastal beauty for which Patagonia is deservedly famous.

Even after the boat ride, your day isn't over yet. On the way back to Puerto Madryn you'll pass some salt flats as well as Isla de Pájaros (Bird Island), an island abounding with different avian species like cormorants, egrets, rheas, and flamingos. Then, around 6 pm, the tour ends and you will return to the hotel.

Looking for more inspiration for your trip to Patagonia? Check out these other 5-day Patagonia itineraries, with outdoor adventures, cultural trips, and best-of tours to hit the highlights.

Chile is chock-full of distinct natural wonders. Case in point, the...

Explore the highlights of Argentine Patagonia on this 5-day...

Experience the wildlife of Argentina on this 5-day adventure. Begin your...
Patagonia 5-Day Tours & Itineraries