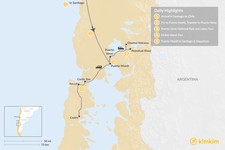 The doorstep to Chilean Patagonia lies in the country's southern Lake District. Here you'll find towering volcanoes as well as some of the largest and most beautiful freshwater lakes in the nation . You'll also find Chiloé, an island just south of the Lake District city of Puerto Montt known as a land of myths and legends, with unique architecture and incredible gastronomy. It's a place truly worth exploring.

This morning you'll transfer by car to Santiago's airport for a flight south to the Lake District city of Puerto Montt. Upon arrival, a van will pick you up to take you to your hotel 30 minutes north in the town of Puerto Varas, located on the shores of Lago Llanquihue. After checking into your hotel, you will have time to enjoy lunch and prepare for the afternoon's whitewater rafting trip.

In the afternoon, a driver will pick you up for the trip to the lakeside town of Ensenada, from where you'll embark on your rafting adventure along the Petrohué River. This is an adrenaline-pumping experience down one of the most beautiful rivers of southern Chile, featuring class III rapids. The rafting trip lasts an hour and a half, and along the way, you'll be able to enjoy the natural splendor of Vicente Pérez Rosales National Park, as well as views of the Osorno, Calbuco and Puntiagudo volcanoes. Once you've completed your journey, a delicious snack will be waiting for you on the riverbanks, after which you'll hop in a vehicle back to Puerto Varas.

After breakfast, a van will pick you up and you'll embark on a day tour around Puerto Varas and the major lakes of the region, including Lake Llanquihue, which is one of the largest lakes in South America. First, you'll head for the biggest and oldest national park in Chile, Vicente Pérez Rosales. Your first stop here will be the Saltos del Petrohué, a thundering waterfall created by glacial retreat as well as 19th-century volcanic eruptions.

The next stop is Lake Todos Los Santos, to the east, which is famous for its emerald waters, beaches comprised of volcanic stones, and unspoiled native forest. Here you can take a swim, enjoy a snack, and snap plenty of pictures. Then, it's off to the Osorno Volcano, where you'll head up to a viewpoint located at 3,000 meters above sea level. From there, you'll enjoy a panoramic view of the valley, Lake Llanquihue, the Petrohué River, the Calbuco Volcano, and Mount Tronador. It's no overstatement to say that these are some of the most incredible views anywhere in South America.

Afterward, you'll return to your hotel in Puerto Varas.

After breakfast, you will transfer from Puerto Varas southwest to the island of Chiloé. To get there, you will cross the Chacao Channel by ferry. Keep an eye on the water, as you might just spot a Chilean black dolphin, which is one of the world’s smallest.

Once on the island, your first stop will be Caulín Bay, where oysters are farmed and the main industry is fishing (there is, of course, some great seafood here). You'll visit Puñihuil, a nearby natural monument consisting of three islets home to a colony of penguins. This is the only place on earth where Humboldt and Magellanic penguins nest alongside each other. During the tour of the town of the coastal city of Ancud, you will also see old churches built after the Spanish conquest when the native Huilliche people were converted to Catholicism. These buildings are a World Heritage Site. Also here is an impressive Spanish fort, a local market, and the Ancud Museum.

If it doesn't happen to be penguin-spotting season then you'll replace that excursion with a visit to Castro, the island's capital city, which is located on Chiloé's southern shores. The city is notable for its multi-colored homes on stilts—built to guard against the high tide. You'll also be able to visit the local church and town square. Afterward, you'll return to the north of the island and transfer back to your hotel in Puerto Varas.

It's time to say a bittersweet goodbye to Chile and the Lake District. After breakfast, a driver will pick you up for the 30-minute trip from Puerto Varas to Puerto Montt, at which point you'll hop a flight back to Santiago. From there you'll meet your connecting flight home.

Looking for more inspiration for your trip to Patagonia? Check out these other 5-day Patagonia itineraries, with outdoor adventures, cultural trips, and best-of tours to hit the highlights.

Chile is chock-full of distinct natural wonders. Case in point, the...

Explore the highlights of Argentine Patagonia on this 5-day...

Experience the wildlife of Argentina on this 5-day adventure. Begin your...
Patagonia 5-Day Tours & Itineraries