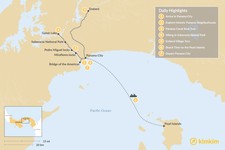 Melding colonial history and bold modernity, the cosmopolitan capital of Panama is a thriving hub in Central America. With this active weeklong itinerary, you'll explore the city's best neighborhoods, boat through the Panama Canal, and take day-trips to nearby national parks and indigenous villages. Finish with a ferry to the Pearl Islands in the Gulf of Panama for a dose of beachy relaxation.

Welcome to Panama City! After landing at Tocumen International Airport, you'll be picked up by a private driver and transferred to your hotel located 30 minutes away. You'll have the rest of the day to relax at your hotel, or get out and sightsee if you're feeling energized. The capital and largest city in Panama is steeped in history, yet much of it today is surprisingly modern (it is often considered the most modern and dynamic capital in Central America).

You can also rent a bike and pedal along the Causeway, which connects four small islands made up of rocks excavated from the Panama Canal. Once a base for US forces, the islands have since been turned into a place for joggers, walkers, and bikers with refreshments along the way. There’s plenty to do after dark if you want to join the city's buzzing nightlife. It is advised that you stick to the downtown area, which is safe, rather than venturing too far without a guide.

Today, after breakfast at your hotel, you'll explore the older side of Panama City with a private guide on a half-day tour. Start off by checking out the ruins and museum of Panama la Vieja—the first city founded by the Spanish colonists in 1519, and therefore the country's first Spanish settlement, which was later destroyed by pirate attacks in the 17th century. Following the destruction, the Spanish colonists decided to rebuild their city in the neighborhood now known as Casco Viejo (more on this next), located along the peninsula—in other words, a better place to defend against future attacks. In any case, Panama la Vieja is an interesting place to walk around with most of the action centered around Plaza Mayor.
Next, you will explore the city's well-known colonial area of Casco Viejo, a UNESCO World Heritage Site since 1980, and also the most popular tourist destination in the city. Recently restored, the area is a beautiful example of colonial architecture festooned with colorful street art, flower boxes, and some of the most charming boutique hotels, galleries, cafés, and markets in Panama City. You'll walk through the streets with your guide visiting different historic monuments including France Square (with a beautiful view of the modern city) and Bolivar Square while learning tidbits from Panama's past along the way.
Following the tour, you'll have more free time to enjoy more of the neighborhoods on your own or simply relax at your hotel.

Today, you'll take a fun group excursion, via mini-cruise, through the Panama Canal, often called the 8th Wonder of the Modern World. This narrow land bridge between the North and South America continents acts as a water passage between the Atlantic and Pacific Oceans—a must-see when visiting Panama City.

For a bit of history, the idea to link the two oceans dates back to at least the 1500s when the Spanish explorer, Vasco Núñez de Balboa, first crossed the isthmus in 1513. After several failed attempts to make the project happen, the idea didn't come to fruition until 1904 when the United States began construction across the 50-mile length. The canal officially opened in 1914 under US control and was not transferred to Panama until 1999.

Your boat tour begins with the transit of the Miraflores Locks where each vessel is raised 59 feet (18 m) above sea level in two distinct steps. You will then enter Miraflores Lake—a small artificial body of fresh water that separates Miraflores from Pedro Miguel Locks, the second set of locks on the Pacific side. You'll also get to photograph the narrowest part of the channel, called Gaillard Cut. Brunch will be served on board and the entire outing lasts about 6 to 8 hours.

Today, you'll have an early breakfast, and then head out of the city for a five-hour trip where you'll experience a part of Panama that is surrounded by tropical woods and animals. Soberania National Park is just 20 minutes from Panama City, yet hosts over 1,300 types of plants and 525 bird species. There are dozens of trails that allow visitors to submerge in the luxuriant nature of Panama, and you'll walk through one of them with your guide.

Following the hike, you'll take a boat ride around Gatun Lake and explore some of its islands. This is an area rich with monkeys, iguanas, and crocodiles, which you can observe in their natural environment. Listen for the cry of the howler monkey that mixes along with the chant of exotic birds for the ultimate reminder of your traveling status.

Today, you'll spend the day experiencing an indigenous community named Embera, located within Chagres National Park, located about an hour outside of Panama City. The adventure starts with a 20-minute canoe ride toward the Chagres River where you'll immerse yourself in the natural surroundings with unique species of tropical flora and fauna. Continue the journey with a hike through the jungle until you get to a refreshing waterfall where you can cool off before hiking a bit further to reach the Embera village.

One of the village chiefs will meet you and then provide a brief presentation of the community's lifestyle and traditions. You'll meet the welcoming and friendly residents and get a tour of the village. See their thatched-roof huts built on stilts (to protect from floods and wild animals) and traditional dug-out canoes up close. Later in the day, you'll watch a performance of traditional music from bamboo flutes and handmade drums, as well as traditional dance. You'll also enjoy a meal with the locals, including fresh fish and fried plantains.

At the end of the tour, you'll also have the ability to browse exquisite handicrafts, including baskets and colorful clothing, some of which are made out of local plants. Consider purchasing one (or more!) of these authentic items to help support the local Embera lifestyle. You'll return to Panama City in the late afternoon.

Today, you'll take an early morning transfer by ferry to get to the Pearl Islands, aptly named for the large black-lipped pearl oysters once abundant in its waters. The archipelago—a group of 250 or more islands and islets—lies about 30 miles off the Pacific coast of Panama, and provides the perfect place to take a beach break.

To arrive, you'll take an early morning transfer by ferry to the archipelago where you'll be able to enjoy a relaxing day on the beach. For a bit of history, these islands were first occupied by Indians before the Spanish discovery and were frequently used by pirates in the years that followed. Now it’s a perfect destination for those in search of peace and relaxing pristine beaches. For instance, Contadora, Saboga, Viveros, and San Jose Islands all offer superb landscapes and host magnificent marine life.

Towels and deck chairs are available at the beach club, and lunch is included. You'll also have the opportunity to arrange activities and tours like diving, snorkeling, kayaking, stand-up paddleboarding, and whale watching (seasonal). In the afternoon, you'll return by ferry with plenty of time to enjoy your last evening in Panama City.

Looking for more inspiration for your trip to Panama? Check out these other Panama itineraries, with outdoor adventures, cultural trips, and best-of tours to hit the highlights.

January is peak season for travel to Panama, and with (mostly) clear...

February falls right in the middle of the dry, high season in Panama....

March is one of the hottest and driest months of the year in Panama....

Panama's dry season comes to a soggy end later in April, but you can...

May is the start of the rainy season in Panama, which stretches for...
Panama Travel Advice

Panama is a great destination at any time of year, not least because...

How Many Days to Spend in Panama

You can have a great getaway in Panama in as short as a long weekend if...

December is the start of the dry season in Panama, so combine that with...

With relentlessly wet weather and a series of national holidays that...

One of the wettest months of the year in Panama, October isn't every...

Claudio B.
United Kingdom
"It was a great tour and a wonderful experience. Reyna was great in accommodating our requests to go to San Blas and spend a night there. The trip to the tro..." read more
Traveled to Panama as a family in July, 2022

David G.
South Carolina, United States
"Working with Zulmy was a great experience as together we were able to setup a fantastic, first time trip to beautiful Panama. The balance of tours, and sig..." read more
Traveled to Panama as a couple in June, 2022

Ellen S.
New York, United States
"We had a marvelous 8 days in Panama. Thanks kimkim! Our local specialist Zulmy was with us every step of the way. We had a much delayed flight in and she ..." read more
Traveled to Panama as a couple in February, 2022
S
Sabena K.
Florida, United States
"Thank you Zulmy, the guides at Tucaya, and Nadia for planning and executing my vacation in Panama. They all did a wonderful job putting together an itinerary..." read more
Traveled to Panama solo in May, 2021