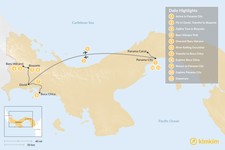 Get ready for an active trip to an undiscovered region of Panama that combines beautiful landscapes, exuberant nature, and pleasant weather. On this 11-day multi-sport itinerary, you'll fly through a cloud forest, raft along a river, and trek up a volcano where you can witness two oceans from above before camping under the stars—an unforgettable experience!

Today, you'll depart Panama City with a short flight to David, the capital of the Chiriquí Province in western Panama. The province and its charming villages are famous for their biodiversity and fresh climate—and you'll see it first-hand with a road transfer to the village of Boquete.

Upon arrival in Boquete, you will have the rest of the day to relax and walk around the colorful village and sample some of the best coffee in the world. The area is home to ample opportunities for hikers and lovers of nature, and you'll be immersing yourself in adventurous activities and beautiful landscapes in coming days!

Get ready for a fun day of adventure and thrills in the highlands of Boquete, where you'll zip through the rainforest canopy.

During this four-hour excursion with a local guide, you'll suit up and move through the trees along a daunting cable as it glides across the rivers and waterfalls forming the landscape of the region, bordering Le Amistad International Park and the famous Baru Volcano.

Once the half-day excursion is complete, you'll return to Boquete for some free time.

Today, you'll spend quality time in the mountains with a full-day trek to Baru Volcano—the highest point of the country. In total, the route is 8.4 miles (13.5 km) from the AMAN (National Environment Authority) booth to the volcano's highest point, and it takes between 6-12 hours depending on your group's fitness level and the day's weather.

Keep in mind, this excursion is only recommended for those who are in good physical condition since it is a difficult hike that requires hours of effort and endurance due to the demands of the inclination. You'll also experience different types of ecosystems as the ascent is made, so the climate can vary from one moment to the next. Temperatures below freezing and frost have been reported, and it's best to pack layers no matter what the weather is in Boquete.

Once you've reached the top—and if it's a clear night—you'll see an unforgettable sunset with views of both the Pacific and the Caribbean. After that, you will set up tents, enjoy a campfire dinner, and experience a night closer to the stars!

Today, you'll want to wake up early, as you will likely catch an incredible sunrise above the clouds outside your tent. After breakfast at camp, you'll pack up and descend the volcano, where you'll return to the village of Boquete. From here, you'll have the rest of the day to relax after the big trek.

If you're feeling energized, you can take another much shorter hike in the area, or head to Los Cangilones de Gualaca, a mini-canyon near Boquete for a refreshing swim.

Today, you'll enjoy the thrill of paddling in the Panama jungle as you travel down the rapids of the Chiriqui Viejo River. Your guide will first pick you up and then prepare you for a route to match your group's skill level.

While on this adrenaline-filled ride, you'll enjoy the jungle scenery and wildlife dotted along the shores as you paddle down the river. The entire excursion lasts about six hours.

Today, after breakfast at your hotel, you'll transfer to the small fishing village called Boca Chica along Panama's central Pacific coast on the Gulf of Chiriqui. The village acts as a gateway to neighboring islands. Upon arrival, you'll check in to your hotel and will have the entire day to explore the natural beauty of the area, which has not yet been discovered by mainstream tourists.

One idea is to check out the Gulf of Chiriquí National Park, which offers outstanding biodiversity, wild landscapes, and pristine islands for exploring. As for meals, the small village center is mainly local, however, you'll find a nice scattering of restaurants within the immediate vicinity.

Today is a free day in Boca Chica to spend however you see fit, and you'll have your choice between several activities and tours available in the area.

Perhaps you'll want to visit some nearby islands by boat, like Games Island, Bolaños Island, or Paridas Island. You can also sign up for excursions like fishing, snorkeling, whale watching, kayaking, or scuba diving. Land activities include renting an ATV or simply going on a pretty nature walk.

It's your last morning along the Chiriqui Province! Depending on the time of your transfer, enjoy a sunrise walk and/or simply relax with breakfast at your hotel. At the designated time, you'll be picked up for the trip back to Panama City.

Once you check into your hotel, you'll have the rest of the day to spend at leisure. Make sure to take advantage of anything you may have missed at the beginning of the trip. Or maybe you want to head to Metropolitan Park for a picnic lunch. This urban wildlife refuge (the only wildlife refuge in the city) offers easy-to-moderate trails and dedicated lookout points.

Today, after breakfast at your hotel, you'll explore the older side of Panama City with a private guide on a half-day tour. Start off by checking out the ruins and museum of Panama la Vieja—the first city founded by the Spanish colonists in 1519, and therefore the country's first Spanish settlement, which was later destroyed by pirate attacks in the 17th century. Following the destruction, the Spanish colonists decided to rebuild their city in the neighborhood now known as Casco Viejo (more on this next), located along the peninsula—in other words, a better place to defend against future attacks. In any case, Panama la Vieja is an interesting place to walk around with most of the action centered around Plaza Mayor.

Next, you will explore the city's well-known colonial area of Casco Viejo, a UNESCO World Heritage Site since 1980, and also the most popular tourist destination in the city. Recently restored, the area is a beautiful example of colonial architecture festooned with colorful street art, flower boxes, and some of the most charming boutique hotels, galleries, cafés, and markets in Panama City. You'll walk through the streets with your guide visiting different historic monuments including France Square (with a beautiful view of the modern city) and Bolivar Square while learning tidbits from Panama's past along the way.

Following the tour, you'll continue to Miraflores, where you can follow the technical operations of the Panama Canal from a platform. The Miraflores is one of three sets of locks in the canal, and a must-see while in Panama.

Discover the quieter corners of Panama on this 10-day journey between...

January is peak season for travel to Panama, and with (mostly) clear...

February falls right in the middle of the dry, high season in Panama....

March is one of the hottest and driest months of the year in Panama....

Panama's dry season comes to a soggy end later in April, but you can...

May is the start of the rainy season in Panama, which stretches for...
Panama Travel Advice

Panama is a great destination at any time of year, not least because...

How Many Days to Spend in Panama

You can have a great getaway in Panama in as short as a long weekend if...

December is the start of the dry season in Panama, so combine that with...

With relentlessly wet weather and a series of national holidays that...

One of the wettest months of the year in Panama, October isn't every...

Ellen S.
New York, United States
"We had a marvelous 8 days in Panama. Thanks kimkim! Our local specialist Zulmy was with us every step of the way. We had a much delayed flight in and she ..." read more
Traveled to Panama as a couple in February, 2022
S
Sabena K.
Florida, United States
"Thank you Zulmy, the guides at Tucaya, and Nadia for planning and executing my vacation in Panama. They all did a wonderful job putting together an itinerary..." read more
Traveled to Panama solo in May, 2021