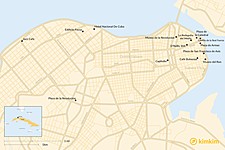 Havana is one of the most fascinating cities on the planet. It’s also the biggest in the entire Caribbean—both by area and population—so it’s a good idea to plan how to spend your time. Follow these suggestions to experience the best of Havana in one unforgettable day.

Havana is a thoroughly unique destination. From the grandeur of its classic hotels and restaurants to the sultry sounds of its bars and clubs, from its astounding Art Deco architecture to its bombastic Socialist monuments, and from its historic center of open-air plazas all the way out to its lovely stretches of coastline, there's no other place like it.

It's impossible to see it all in one day. But if 24 hours is all you've got in Havana, rest assured that you can still see and do — and eat and drink — a lot.

Practical Tips for a Perfect Day in Havana

Plan ahead! Once you're in Cuba, internet connections aren't easily accessible, and you won't have your standard 4G coverage to rely on, either. It's better to know what you want to do, more or less, before setting foot on Cuban soil.

Bear the following thoughts in mind when out and about exploring the city. First, Havana's public transportation system is geared towards locals and it's not particularly user-friendly for foreigners. Navigate Centro Habana (Central Havana) and Habana Vieja (Old Havana) by foot and keep car and bus rides to a minimum.

Second, though the city is one of the safest in the western hemisphere when it comes to violent crime, petty theft is common. Keep your valuables close, and don't wander around side streets flashing a smartphone or an expensive camera.

Third, be flexible. Though it's best to have a plan, you should take your time exploring. Havana can be chaotic, but the locals are generally laid-back, and life moves at a more relaxed pace. Budget an extra half hour for your lunch, and don't stress if your food and drinks don't come immediately to the table.

Finally, choose the most convenient base. You only have one day in Havana, so you'll want to be in the center of the action. To make the following itinerary easier to pull off, it's best to stay in Centro Habana or Habana Vieja (as opposed to outer neighborhoods, like Vedado).

Rise early, as most people in Havana do, and head down to the lovely waterfront, known as the Malecón. Watch the city wake up as fishermen, canoodling lovers, musicians, and groups of friends gather on the seawall with the crashing surf in front and the city behind, watched over by its impressive 500-year-old fortifications.

For breakfast, head to Habana Vieja, Havana's historic heart. A great option is Café Bohemia, in a colonnaded colonial house on Plaza Vieja.

Spend the rest of the morning exploring the surrounding cobbled streets and sights of this picturesque central neighborhood. Most of Havana's tourists congregate here, and it is easy to see why. With colorful colonial facades looming high above a labyrinth of lanes and alleyways, and four major plazas — Plaza Vieja, Plaza de San Francisco de Asís, Plaza de Armas, and Plaza de la Catedral — with all their associated attractions, this part of Havana is rich in spectacular buildings.

It's never too early for a mojito around these parts. A rite of passage for first-timers is La Bodeguita del Medio, Havana's most popular bar, located near Plaza de la Catedral. Patronized by a long list of Havana-bound A-listers over the decades (think Salvador Allende, Nat King Cole, and Gabriel García Márquez) it still serves superb cocktails.

Read this article for a more detailed walking tour of Habana Vieja.

Lunch options near Plaza de la Catedral are numerous. For a window into the trendy Havana-of-the-future, and for some of the most inventive food in Habana Vieja, eat at O'Reilly 304.

Don't linger too long over lunch, though, as there's still plenty of sightseeing to do. For the first post-lunch stop, Museo de la Revolución (Museum of the Revolution) is an essential crash course in the history of the Cuban Revolution. With interior decoration by Tiffany's of New York, the museum charts not just the Revolution, but all of Cuban history, from its indigenous past through to the 1960s. This is your chance to view the tank that Fidel Castro used during the Bay of Pigs invasion.

Next, grab a taxi from the Museo de la Revolución to Plaza de la Revolución for a quick photo snap in front of the towering sculpture of Che Guevara. (Pay attention to the scenery: on the taxi ride, you'll spot the iconic Capitolio, the National Capitol building, which was modeled after Washington DC's Capitol.)

After the photo op, you can ask the same taxi driver to take you to the Hotel Nacional in the Vedado neighborhood. Take a stroll around this sumptuous hotel, built in 1930s-era Neoclassical style and evocative of the city's glamorous heyday. Stop for coffee and cake in the beautifully landscaped rear garden, taking in peaceful sea views.

Early evening is all about Havana's (and Cuba's) tallest building, Edificio Focsa, in the Vedado neighborhood. Take the lift to the top of this huge 39-floor building for jaw-dropping panoramic views around Havana. The restaurant on the top floor, La Torre, is wonderful, serving great food and cocktails. It's simply the place to be at sunset.

After relaxing at high altitude, take the elevator back down to the street. You'll find you're conveniently located in the heart of Havana's best entertainment district. Vedado boasts many of the best live music venues in the city. If you haven't eaten already, combine dinner with legendary Havana jazz at Jazz Café. There are plenty of other excellent entertainment options in the area, too. Grab a taxi back to your accommodation from here: with any luck, you'll be riding back in style in a 1950s-era Cadillac.

Changed your plans and decided to stay in Havana for another few days? Great choice. Check out this recommended four-day itinerary for further suggestions on what to do and see in Havana.

Havana is Cuba's capital city and the island's largest and most diverse...

Havana is brim-full of lodging options, from 1950s mobster-era hotels to...

Top 15 Things to Do In and Around Havana

Havana is one of the most fascinating cities on the planet. It’s also...
Best of Havana

It's hard not to fall in love with Cuba. Set to a soundtrack of jazz,...