Most parts of Ethiopia experience two main climate seasons - a dry season (October - May) and a rainy season (June - August). However, differences in altitude tend to add a number of variations, both in terms of temperatures and rainfall. Lowland areas usually see hotter temperatures than the Highland regions, which cover a great portion of Ethiopia. Here, weather conditions are noticeably cooler and there are also generally higher levels of rainfall to be expected.

From October to May, Ethiopia has its dry season. This is the time of year when most travelers choose to come to Ethiopia and hence can be classified as its 'peak season'. Occasionally there is some rainy weather, although this is usually nothing more than the odd light shower.

The period from December to February can be classified as Ethiopia's 'winter' season when the overall climate is a little cooler than during the rest of the year. From March to May, temperatures are on the rise again. In Addis Ababa, May can often be the hottest month.

During the period from June to August, Ethiopia enjoys its summer monsoon season, when rainfall is at its heaviest and thunderstorms often occur. Whilst it is quite cloudy at this time of year, visitors can usually enjoy at least a couple of hours of sunshine each day, mostly in the morning.

The best time to visit Ethiopia would perhaps be during the dry season. But, the climate varies across the different parts of Ethiopia. Here are our suggestions for the best times to visit the different areas:

North, East, West and all highlands: September to April

South: End of July to mid of October and end of November to mid of February

Visiting Ethiopia during the Christian Orthodox festivals makes for an unforgettable experience. The most famous ones are Meskel (September 27) and Timkat (Ethiopian Epiphany, January 19), beside the common holidays Christmas (January 7) and Easter (varies). 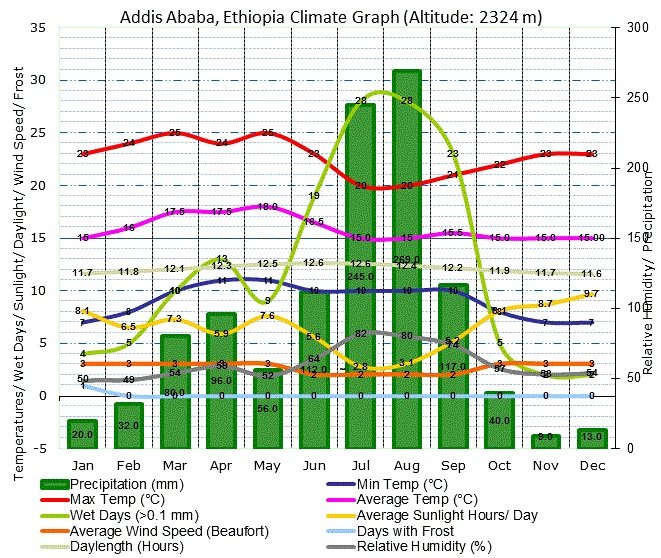 Plan your trip to Ethiopia

Plan your trip to Ethiopia

Best Things To Do In Addis Ababa

Almost everyone starts and ends their trip to Ethiopia in Addis Ababa....

Whether you have an extended stopover or simply want to add some...

Short Trips In and Around Addis Ababa - 8 Days

Addis Ababa and its surroundings have more to offer than people think....

Trekking in the Simien Mountains and around Lalibela - 9-...

Explore the most important places along the classic historical northern...
Ethiopia Tours & Itineraries

Kimkim has selected the best Ethiopia travel agents so you'll have a...

Best Things To Do In Addis Ababa

Almost everyone starts and ends their trip to Ethiopia in Addis Ababa....

Looking for a list of great day trips around Addis Ababa? While starting...

During this eight-day exploration of Ethiopia, you'll discover ancient...

Whether you have an extended stopover or simply want to add some...

In recent years, Ethiopia has become one of Africa’s leading birding...

T
Tom W.
Florida, United States
"Our guide Elayas was simply superb. We were greatly surprised and excited about the rich scenery, history and traditions in Ethiopia . Evenings of traditiona..." read more
Traveled to Ethiopia as a couple in September, 2018

Robyn B.
Australia
"I had wanted to go to Ethiopia for sometime, when it was decided I searched the internet for a company that could deliver the tour that I wanted. I found kim..." read more
Traveled to Ethiopia as a couple in April, 2018

Maria Macarena H.
United Kingdom
"The attention from Marco during all the searching and booking process was great, and the fact that you could pay all the travel costs through one platform ma..." read more
Traveled to Ethiopia solo in August, 2017

Jeff D.
Pennsylvania, United States
"The trip allowed us to visit many exceptional sites accompanied by professionals, exploring and learning as we went. We especially appreciated the attention..." read more
Traveled to Ethiopia as a couple in May, 2017
Create your custom-made trip to Ethiopia
Get Started