Heraklion is one of Greece's most important cities, but it's never been considered one of the prettiest (despite its rich historical and cultural heritage). For a long time, the city was protected from sea invaders by large walls. The city only recently opened up its waterfront promenade for locals and visitors to enjoy, therefore upgrading the city's aesthetics as a whole.

Still, there's much to see and a lot to discover in Heraklion, making it a hidden gem of sorts! As you explore the Old Town, start with the Morosini Lions Fountain, a Venetian highlight from the 17th century. Then admire the old city walls. These fortifications were first built by the Arabs and later reinforced by the Venetians in the 15th century. They survived the second-longest siege in history, a 21-year battle before Heraklion fell to the Ottomans.

The walls remain mostly intact to this day, making the city known as one of the best-preserved Venetian fortifications in Europe. The walled city used to have several gates, but today you'll only find the New Gate and Chanioporta Gate, with its characteristic winged Lion of Saint-Marc. "Chanioporta" means "gate to Chania," which is the second-largest city in Crete.

Next, head to the Martinengo Bastion, where you'll also find the winged lion and pass through the Venetian walls to one of the city's highest points. Here you'll find the tomb of the renowned writer Nikos Kazantzakis. In Greek, the tomb reads, "I don't hope in anything. I don't fear anything. I am free."

Next, visit Heraklion's food market, which is one of the most abundant in the Mediterranean. You'll find various modern goods, as well as traditional Cretan products, like the famous Cretan olive oil, raki, local wine, honey, herbs, and more.

Read more about unique and interesting activities on Crete. 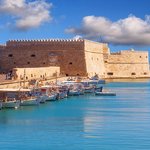 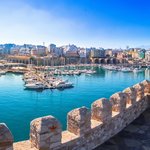 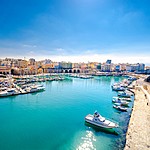 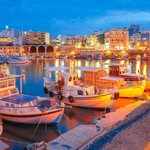 Discover the Palace of Knossos, known to be Europe's oldest "city."...

Olive oil is a staple in every Cretan home and a significant part of the...

Olive oil is a staple in every Cretan home and a significant part of the...

The Mythical Cave of Zeus Tour from Heraklion

Discover Crete's mythological side, explore its natural beauty, and...

Discover the ancient scenery and myths of Minos, Ariadne, Theseus, the...

This active island-hopping itinerary visits two gems in the Aegean...

Take 11 days to travel through some Greek island highlights with this...
Best of Heraklion