Meet a local expert for a tour of the Alhambra, the Generalife Gardens, and the nearby Albaicín district, Granada's old Arabic quarter.

When the Moors ruled, Granada was once the last bastion of Al-Andalus (the historic Muslim title for the Iberian Peninsula). You can see examples of this history in the form of Granada's most famous landmark, the Alhambra, which receives more than two million visitors annually.

This imposing Muslim fortress was built atop a hill overlooking Granada and dates to the 9th century. It was rebuilt in the 14th century by the Nasrid Dynasty and served as a Moorish palace until 1492. After the Christian reconquest, it became the Royal Court of Ferdinand and Isabella. It's now a UNESCO World Heritage Site, and on tour, you'll walk through its grand halls and stroll the Generalife Gardens, which are filled with colorful flowers, fountains, and panoramic views of the city.

Afterward, your guide will walk you through the city's old Arabic quarter, Albaicín. The beautiful and hilly Albaicín neighborhood is Granada's artistic center. As you walk through twisting alleyways, you'll come across stunning views of the city, the Alhambra, and the Sierra Nevada Mountains. Many streets are lined with colorful clothes, rugs, and glassware, and you should stop into one of the many tea houses for special spiced coffees and churros con chocolate. 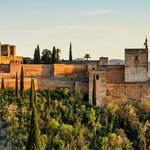 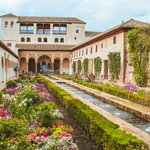 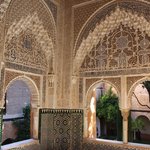 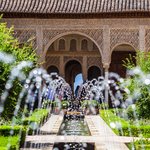 Itineraries with Tour the Alhambra & Generalife Gardens in Granada

This 8-day cultural tour takes you from Seville to Granada in Spain's southernmost region: Andalusia. Along the route, you'll explore iconic villages like Ronda (set on a spectacular gorge) as you head towards the Alhambra palace complex while discovering beautiful landscapes, centuries of Moorish and Roman history, and top-notch cuisine—often with the help of private guides.

Explore Spain's lively cities and vibrant culture, starting with a gourmet food tour in Madrid and a flamenco show in Seville. Stop in Córdoba to tour the Mezquita, then discover Granada's most popular site, the Alhambra and Generalife Gardens. Meander the historic district of Albaicín with a personal photographer before ending the trip in Barcelona by touring the works of Gaudí and enjoying a day trip.

This 9-day road trip includes stops at some of Spain's most historic locales, including Madrid, Toledo, and the Andalusian cities of Seville and Granada. Celebrate rich Spanish culture as you tour historic Old Towns by foot and bike, all while tasting delicious tapas and enjoying a flamenco show. You'll explore the southern countryside with a tour of an olive oil farm and a hike along Caminito del Rey, and then visit Granada to discover one of the most impressive Moorish palaces in Europe, the Alhambra.

Explore the highlights and flavors of Spain with visits to the cities of Madrid, Granada, Málaga, Cadiz, and Seville on this 12-day trip. You'll enjoy private tours of the historic old towns, visit ancient religious sites, and taste Spain's best culinary offerings. Start the trip in Andalusía to see the Alhambra in Granada, visit Málaga to learn to cook in a traditional finca, then wrap up the trip in Seville to enjoy a flamenco show.

Highlights of Madrid and Andalusia - 8 Days

Explore some of Spain's best cities on this 8-day trip to Madrid and the region of Andalusia, starting with private tours of Madrid's historic neighborhoods and its royal past. Board the train to the city of Seville for tapas and flamenco, as well as a day trip to the town of Ronda and a winery. You'll end the trip with Granada for a tour of the famous Alhambra and Generalife Gardens before returning to Madrid.

Head outside Granada and into the Sierra Nevada Mountains for a guided...

Why not pair strolling through Granada's neighborhoods with exploring...

Evening Tour of the Albaicín in Granada

In the evening, when the sun sets and the locals pack the tapas bars,...

Quench your thirst for one of the most popular traditions in...

La Sagrada Família is one of Barcelona's biggest tourist draws, a...

The Best Boutique Hotels in Granada

These hotels will help you get in touch with history and Andalusian...

Travelers to Spain typically plan a trip for 12 to 14 days when...

Highlights of Madrid and Andalusía - 8 Days

Explore the highlights of Spain by visiting the cities of Madrid,...
Best of Granada