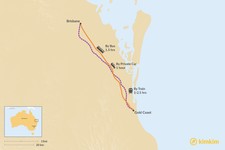 The Gold Coast, on the far southern coast of Queensland, is just 48 miles (78 km) south of the state capital, Brisbane. Going by car is the most convenient option—it's only a one-hour drive—but there are also train and bus options. You can also opt to go as part of a private day tour.

If you have your own wheels, the Gold Coast is a quick one-hour drive south-east of Brisbane. Take the M1 out of the city, and stay on it until you reach the Gold Coast. Try to avoid driving during peak hours when commuters will be on the road, as this can slow the journey down a lot.

Trains run between Brisbane's airports and many central-city stations (such as Brisbane Central, Roma Street Station, and South Bank) to the Gold Coast. The train stations on the Gold Coast are inland from the center of town, so you'll need to get another a bus, tram, or taxi to your destination. Taking the train is generally much cheaper than taking a shuttle bus, so is the better option if you want to take public transport.

If you don't plan to stay on the Gold Coast but just want to visit for a day while staying in Brisbane, various day tours are available. These suit a range of interests, needs, and preferences, from family-friendly to nature-themed activities.

Soak up everything the sunshine state of Queensland has to offer, from...

Begin your journey in artsy Melbourne, exploring the hidden alleyways,...

Explore southeast Australia on this combination self-drive and flying...

Enormous Queensland stretches from the tropics to the semi-tropics, and...