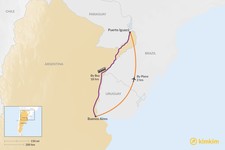 Almost 800 miles (1290 kilometers) separate Buenos Aires and Puerto Iguazú, the Argentine city closest to the famed Iguazú Falls. Though long-distance buses between the two cities exist, the fastest and easiest way to travel from Buenos Aires to Puerto Iguazú is to fly. Flights depart daily from both Aeroparque (AEP) and Ezeiza (EZE), the two main airports in Buenos Aires.

Several lowcost flights to Puerto Iguazú do depart from El Palomar Airport (EPA), though this airport is significantly more difficult to access from  Buenos Aires and therefore not recommended.

Most of the daily flights to Iguazú depart from Aeroparque, Buenos Aires' local airport, which is located near the La Plata River on the edge of the Palermo neighborhood. The airport is easily accessible by taxi, private transfer or local bus. If you go to the airport during rush hour, make sure to give yourself extra time to travel, as that part of the city can get busy.

A few flights also depart from Ezeiza International Airport, 20 miles outside the city. The easiest way to reach Ezeiza is to book a private transfer in advance or use the Tienda Leon shuttle buses, which leave from Puerto Madero every 30 minutes. Traveling to Ezeiza takes at least an hour.

Once you arrive at the Iguazú airport a taxi can take you into the city of Puerto Iguazú, which is 12 miles (20 kilometers) away.

Many bus companies offer trips from Buenos Aires to Puerto Iguazú, which usually takes around 18 hours. The buses range from reclining seats to sleeper seats similar to first-class seating on an airplane, and usually include meals and blankets. The Puerto Iguazú bus terminal is in Puerto Iguazú city, and from there you can take a taxi to your hotel or straight to Iguazú National Park and the Iguazú Falls.