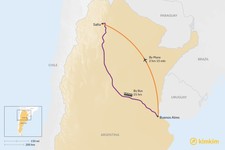 Located over 900 miles (1,450 km) away from Buenos Aires, Salta is a great starting point to explore the Northeast of Argentina, whether you decide to go south to the Calchaquí Valley or opt for a longer itinerary that includes all of the region's highlights.  The easiest way to reach Salta from Buenos Aires is by plane, though long-distance buses exist as well.

Most flights for Salta leave from Buenos Aires' Aeroparque airport (AEP), located on the Costanera Norte, 3 miles from the city center. The easiest way to reach Aeroparque is to take a taxi or private transfer, but you can also take a city bus. The 160, 33, 37, and 45 lines all stop at Aeroparque.

Most international flights land at Ezeiza Airport (EZE), which is about 20 miles (30 km) from the city center. If you arrive at Ezeiza and need to transfer to Aeroparque, you can take a shuttle bus or hop in a taxi. The trip between the two airports takes at least an hour so make sure to give yourself lots of extra time.

Some lowcost airlines also fly to Salta from Palomar Airport (EPA), which is more difficult to reach and for that reason not recommended.

Once you arrive at the Salta airport there are both taxis and private transfers available to take you into the city, which is 7 miles away. The 8A bus also takes you into the city from the airport.

Buses from Buenos Aires' Retiro station to Salta take between 20 and 22 hours, depending on the stops planned on the route, so this option is not your best choice. The Salta bus terminal is on the edge of the city and from there you can grab a taxi, private transfer, or bus to the city center 2.5 miles away.

Madeleine C.
New York, United States
"Emi planned the honeymoon of our dreams! We had less travel time than we would have liked but she was able to help us plan a trip that included multiple dest..." read more
Traveled to Argentina as a couple in April, 2022
J
Jessy D.
Alabama, United States
"We had a blast. It was a seamless experience from Planning it with Emi to the panoramic views, gorgeous beautiful South America to the outstanding guides, go..." read more
Traveled to Argentina as a group in May, 2022
Create your custom-made trip to Argentina
Get Started