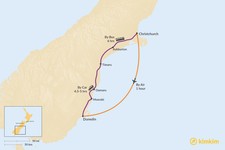 Christchurch and Dunedin are the two largest cities in the South Island, and both are located on the east coast. Christchurch is 224 miles (361 kms) north of Dunedin. Here's how to get between the two cities.

Flying is the quickest way of getting from Christchurch to Dunedin, and the most convenient if you don't have your own car. Several direct flights operate per day. When the weather's clear you may enjoy some views along the eastern coastline of the South Island, but this part of the country isn't so dramatic from the air as it's mostly flat.

If you have your own wheels, the drive between Christchurch and Dunedin is straightforward, as there are none of the mountain roads or passes that you can expect further west on the South Island. Head south out of Christchurch on State Highway 1 and keep going. You'll pass through the towns of Ashburton, Timaru, Oamaru, and Moeraki. Moeraki is highly worth stopping at, as it's home to the famous Moeraki Boulders, one of the most popular attractions in this part of New Zealand.

You can make the same journey as above by bus. Buses leave Christchurch in the afternoon. They take a bit longer than traveling by private car, as they make scheduled toilet and meal stops.

How to Get to Waiheke Island

Waiheke Island is the most populated island in the Hauraki Gulf, and is...

How to Get from Wellington to Taranaki

Mount Taranaki, in the west of New Zealand's North Island, is about 200...

Lake Tekapo sits right in the center of New Zealand's South Island. It's...
Getting Around New Zealand

The 12-day itinerary includes some of the South Island's greatest...

Explore the highlights of New Zealand's North and South Islands on this...

This fun two-week tour allows you to experience some of the highlights...

The adventure begins in the cultural heartland of Melbourne, and...