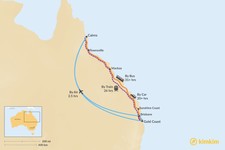 The Gold Coast, on Queensland's southern coast, and Cairns, in the far north, are around 1000 miles (1700 km) apart. But despite Australia's vast distances, it's easy enough to get between the Gold Coast and Cairns. It's common to make the 90-minute drive to Brisbane and take a quick flight from there, though some travelers will want to make this an epic, multi-day road trip along the Queensland coast.

Some direct flights operate between Cairns and the Gold Coast. Many more operate from Brisbane, so if you can't get a direct flight to Cairns (or if the price is too high), consider making the 1-2 hour trip north to Brisbane first and flying from there.

Driving directly between the Gold Coast and Cairns would take about 20 hours, but doing the drive in one go would be a mistake (as well as tiring and uncomfortable) because there are so many amazing things to see and do along the way.

The most direct route follows the Queensland coast most of the way, going via Brisbane, the Sunshine Coast, Mackay, the Whitsundays, and Townsville. At least two weeks is recommended for this trip, longer if you have time.

Long-distance buses run along the Queensland coast, as well as a few routes inland. You'll probably need to transit in Brisbane and/or Noosa en route to Cairns. The bus takes much longer than driving yourself, but you can break the journey up into smaller sections to make it more comfortable and to visit great places along the way.

The scenic Spirit of Queensland train runs between Brisbane and Cairns (and vice versa) several times a week. The Gold Coast is also well connected to Brisbane by train. The full journey between Cairns and Brisbane takes 25 hours, and it's possible to get on or off at various points along the way (such as at Proserpine, for the Whitsunday Islands). Trains are spacious and comfortable, and have dining carts. Some lie-flat berths are available. This isn't a cheap mode of transport, but it's much more comfortable than taking the bus.

Traveling the 1,500 miles (2,414 kilometers) from Sydney to Cairns, the...
Getting Around Australia

Rebecca H.
United States
"Had a wonderful time , missed flight due to weather and Kim Kim team was right on it . No way we could of experience all the things we did in a short time w..." read more
Traveled to Australia as a family in August, 2019
Create your custom-made trip to Australia
Get Started