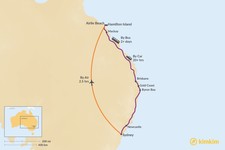 Queensland's Whitsunday Islands lie in the Coral Sea between the mainland and the Great Barrier Reef. The coastal town of Airlie Beach is the most common jumping-off point to the islands, and is 1166 miles (1874 kms) north of Sydney. Here's how to get from Sydney to the Whitsundays.

Unless you fly directly to Hamilton Island in the Whitsundays (see details below), you'll need to get a ferry from the mainland to the islands, as they're not connected by bridge.

Ferries between Airlie Beach and Hamilton Island are the most frequent, with many departing each day, but some also run from Shute Harbour, about 6 miles (10 kms) east of Airlie Beach. Ferries take about an hour, and are passenger only. If you arrive in Airlie Beach by car you can leave it at the long-stay parking lot.

Hamilton Island is home to the only airport on one of the Whitsunday Islands, Great Barrier Reef Airport. Direct flights arrive there daily from Sydney (as well as Cairns, Brisbane, and Melbourne).

The other airport that services the Whitsundays is Whitsunday Coast Airport at Proserpine, a half-hour drive inland from Airlie Beach. Most flights to that regional airport come from Brisbane, but several a week also run from Sydney.

If you can't get a direct flight from Sydney, it's easy to go via Brisbane.

Considering the huge distance between Sydney and the Whitsundays, many travelers prefer to fly.

For travelers seeking a memorable Australian road trip, the drive between Sydney and Airlie Beach is a good option. It's not recommended to do the trip all in one go, but to take your time over at least two weeks, stopping at points of interest along the way, including Brisbane, which is a bit less than half-way.

The fastest overland route between Sydney and the Whitsundays takes an inland route. However, most travelers would find the coastal route more appealing, going via Newcastle, Byron Bay, the Gold Coast, Brisbane, the Sunshine Coast, Rockhampton, and Mackay.

If you take an inland route, it's important to have some emergency supplies with you, as settlements are few and far between in some parts of the outback. The coastal route is more heavily inhabited, so there's less risk of getting stuck anywhere too far from help.

Buses between Sydney and Airlie Beach go via Brisbane, where you'll need to change buses. If going straight through, the trip takes about 36 hours, but this isn't recommended. If you want to go overland but can't drive yourself, it would be preferable to break the journey up into smaller legs, or at least stop in Brisbane for a while.

On this two-week, self-drive journey through Australia, visit two major...

On this 10-day trip to Australia, enjoy a mix of city tours and outdoor...

Visit three cities of Australia with this eight-day itinerary. You'll...