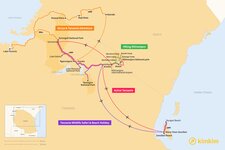 Ten days is enough time to enjoy the best of Tanzania and then some. You can go on safaris in multiple national parks (including the Serengeti), kick back on the white-sand beaches of Zanzibar, and even hike up Mount Kilimanjaro. Or pack twice the fun in a single itinerary by combining Tanzania with a visit to Kenya's star attractions like the Maasai Mara National Reserve and cultural excursions with tribal warriors.

This 10-day escape to Tanzania begins with 4x4 wildlife safaris in the most epic national parks, then winds down on the beaches of Zanzibar, one of the most beautiful destinations in East Africa.

Arrive in Arusha, which is near Tanzania's most popular safari destinations. Things kick off on day two with a drive to Manyara National Park, whose lake is blanketed with flocks of bright pink flamingos. Then you're off to the mother of all wilderness areas in Tanzania: Serengeti National Park. It covers 5,700 sq miles (14,763 sq km) of vast savanna and hosts the annual Great Migration. Thousands of wildebeests, zebras, and gazelles migrate to new grazing grounds during this yearly event. You'll explore this park on a full-day game drive, during which, if you're lucky, you might spot a leopard.

On day five, you're off to the Ngorongoro Conservation Area, the largest volcanic caldera in the world, measuring 1,968 feet (600 m) deep and 100 sq miles (260 sq km) wide. Its fertile valley floor is home to thousands of animals, including the famous Big Five safari game: lions, leopards, elephants, buffalo, and black rhinos. After game drives on the crater floor, you'll visit Tarangire National Park, home to thousands of bush elephants. Then enjoy a couple of days relaxing on the powdery white-sand beaches and crystalline waters of Zanzibar, Africa's crown jewel of the Indian Ocean. Learn more

Enjoy the highlights of two of the world's premier safari destinations on a 10-day tour of Kenya and Tanzania that includes game drives and spending time with tribal warriors.

This time, you'll arrive in Nairobi, which sits on a national park filled with game animals. First up is a conservation tour of two wildlife sanctuaries: one for rescued elephants and the other a breeding center for Rothschild's giraffes (which you'll get to feed). On day three, spend the day with real Maasai tribal warriors and overnight in a traditional bush camp. Then transfer to the Massai Mara National Reserve, a 580-sq-mile (1,510-sq-km) park that borders the Serengeti and hosts the Great Migration. Hit the road on game drives over two days, or you can opt for an airborne safari in a hot-air balloon.

On day six, you'll cross the border into Tanzania and head to Lake Victoria, the largest lake on the continent. Here you'll overnight and perhaps do some fishing. Then spend a couple of days on morning and afternoon game drives of the Serengeti, a UNESCO World Heritage Site and biosphere reserve. If you didn't see any rhinos, not to worry, because, on day nine, you're going to the Ngorongoro Crater. Due to anti-poaching patrols, there's a healthy population of black rhinos here that you're all but guaranteed to see. Learn more

Plan your trip to Tanzania
Chat with a local specialist who can help organize your trip.
Get Started

Choose this greatest hits adventure that includes the highlights of Tanzania, from the Serengeti and Zanzibar to  Mount Kilimanjaro.

After Arriving in Arusha, you'll transfer to the foot of Mount Kilimanjaro in northeastern Tanzania. Though you won't have time to summit this most famous (and tallest) of Africa's mountains, you will embark on a 5-6-hour day hike that will take you up 2,723 feet (830 m) to a lookout offering sweeping views of Kilimanjaro's peak and out to Kenya. Then take a short flight to the Serengeti for two days of game drives by road or in the air. Note if you come from June to November, you'll be privy to the Great Migration of thousands of plains game migrating around the savanna.

There's one more safari in store for you at Ngorongoro Conservation Area before hopping another flight—to Zanzibar. Besides world-class beaches, this island archipelago is famous as a major spice producer, and you'll tour a farm to learn about the cultivation of clove, nutmeg, and cinnamon. Over the next couple of days, enjoy optional activities that include snorkeling, surfing, caving, and more. You'll also want to stroll Stone Town, Zanzibar's medieval city center that is so well-preserved it enjoys UNESCO World Heritage status. Learn more

Grab your hiking boots and trekking poles because you're off on a 10-day quest to summit Kilimanjaro, the world's largest freestanding mountain.

You've seen the images and heard the legends; now it's time for you to conquer this icon of Africa yourself. From Arusha, you'll transfer to the town of Moshi, at the foot of the mountain. After prepping on day two, you'll embark on a 6-day hike up this 19,341 feet (5,895 m) giant. The ascent is dramatic as you trek through five different ecosystems, from the hot and humid tropical forests near the base to the frigid glacial summit zone near the top. The starting point is the Machame Gate and follows a popular route that affords the best views of any circuit in Kilimanjaro National Park.

Each day's hike covers a few miles and takes at least four hours to complete. Every night you'll stop to rest at campsites situated amid unique geological formations and look out at incredible views. You'll cross alpine deserts and scramble over rock walls on your ascent to the crater rim of this dormant volcano. Eventually, you'll arrive at Uhuru Peak, the tallest of Kilimanjaro's three summit zones at 19,340 feet (5,895 m). Then it's a relatively quick descent back to Machame Gate, where you'll receive your certificate of completion. Learn more

This 10-day adventure combines the best safari locations in Tanzania...

Get ready for a safari adventure in Africa that covers not one...

Experience the very best of Tanzania, from the fertile plains of the...

You've accepted the challenge, and now you're off to Tanzania to conquer...

Even in as little as a week, you can experience Tanzania's most famous...
Tanzania Tours & Itineraries

Jonathan G.
Colorado, United States
"Tanzania and the national parks truly were unforgettable. Our driver / guide Living was great and PK Tours did a good job arranging everything. Bianca also w..." read more
Traveled to Tanzania as a family in June, 2018
Create your custom-made trip to Tanzania
Get Started