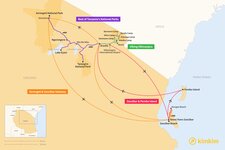 Even in as few as seven days you can cover the major highlights of Tanzania. That includes embarking on safari adventures in two or even three of this country's national parks. Or mix an active vacation with beach time on tours of the Serengeti and time spent lazing on Zanzibar's white sand beaches. And if you're really feeling adventurous, test your fortitude on a six-day hike up the awe-inspiring Mount Kilimanjaro.

Experience Tanzania's two most popular activities on a 7-day safari and beach escape.

You'll arrive in Arusha, a city in northern Tanzania strategically located near the country's most famous national parks. From here, hop a quick flight to an airstrip in Serengeti National Park. Meaning "endless plains" in the Maasai language, the Serengeti's 5,700 sq miles (14,763 sq km) of savanna are renowned for their abundance of wildlife, including the famous Big Five safari animals: lions, leopards, buffalo, elephants, and black rhinos. This region also hosts the Great Migration, which from June to November sees over a million wildebeest undertaking the journey to new grazing grounds.

You'll camp in the park, and over three days, embark on game drives in 4x4 safari vehicles to spot the exotic wildlife. Beyond the Big Five, you'll also see plenty of giraffes and zebras, and you might even witness lions on the hunt for wildebeest. Then you'll pack up and fly offshore to the island archipelago of Zanzibar for the last leg of the trip. Known for its powdery white sands and crystalline waters, you can spend the remaining two days relaxing on the beaches here. Snorkeling and surfing are other terrific options, as is a tour of Stone Town, which is Zanzibar City's medieval center. Learn more

Embark on a 7-day wildlife adventure that will take you to three different national parks, including visits with indigenous tribespeople.

Like the previous itinerary, you'll arrive in Arusha, except you'll travel first to Tarangire National Park instead of the Serengeti. This is one of Tanzania's smaller national parks (it covers 1,000 sq miles/2,600-sq km), yet it is home to thousands of African bush elephants, which you'll see on an afternoon game drive. Then you're off to Lake Eyasi to spend a day with the Hadzabe people, a threatened tribe that still lives off the land the same way their people have for the past 10,000 years. Next, you'll visit Mto Wa Mbu, a community of farmers and artisans comprised of all 120 tribes in Tanzania.

Afterward, head north to the central savanna region of the legendary Serengeti for more game drives. It's an excellent area to track lions and cheetahs. Saving the most unique national park for last, you'll arrive at the Ngorongoro Conservation Area. This UNESCO World Heritage Site is the largest volcanic caldera in the world at 1,968 feet (600 m) deep and 100 sq miles (260 sq km) wide. On the fertile plains of the crater floor, there are over 20,000 animals, including all Big Five species. In fact, because of anti-poaching patrols, this is one of the few places where you're likely to see a black rhino. Learn more

Plan your trip to Tanzania
Chat with a local specialist who can help organize your trip.
Get Started

This 7-day holiday in Zanzibar includes beach time and cultural highlights on the main island, plus a trip to neighboring Pemba for diving and other aquatic adventures.

This itinerary focuses on Zanzibar, a jewel of the Indian Ocean off Africa's east coast. Its inviting beaches and calm, clear waters make it a premier vacation destination, but there's also culture to spare. You'll experience it on a walking tour of Stone Town, the capital's medieval center. During this outing, you'll see historic landmarks like the 17th-century Arab Fort, 19th-century Sultan's Palace, and the Anglican Cathedral. Cap your second night here with a 5-course tasting menu at an authentic Swahili restaurant in a trendy area of Stone Town.

Then fly north to the neighboring island of Pemba. This is the place to come to truly get away from it all, as there is little infrastructure amid its miles of white-sand beaches, green valleys, and coconut groves. However, there are plenty of optional activities to keep you busy, including fishing, sunset sailboat cruises, and aquatic adventures. Snorkeling and diving are popular excursions. The offshore Pemba Canal is a rich marine ecosystem filled with countless species, including turtles, rays, whale sharks, and tropical fish. Learn more

This unforgettable week-long hike will take you to the snow-capped summit of Mount Kilimanjaro, the biggest mountain in Africa.

You'll arrive in Arusha and transfer to the town of Moshi, at the foot of Mount Kilimanjaro, which stands at 19,341 feet (5,895 m). Although this is the largest freestanding mountain in the world, hiking to its summit isn't particularly difficult because the trails aren't steep. On this multi-day trek, all you have to worry about is acclimatizing to the altitude as you ascend rapidly. On a pre-hike briefing, your guide will cover all this, plus ensure your equipment is in order. Then you'll transfer to the Machame Gate in Kilimanjaro National Park to begin the ascent.

This route is the most popular and scenic on the mountain. It takes six days to reach the summit, and each night you'll overnight in a different camp. Be prepared to hike around six hours each day as you pass through diverse ecosystems. These range from tropical forests to alpine deserts to the glaciers of the summit zone. As you go, you'll spot endemic wildlife like colobus monkeys, and there will be incredible viewpoints throughout the trek. Of course, you'll witness the most incredible vista at the Uhuru Peak summit (19,340 ft/5,895 m), and from there, it's a couple of days of descent down the mountain. Learn more

Even in as little as a week, you can experience Tanzania's most famous...

Experience one of the true gems of the Indian Ocean with a visit to the...

So you're determined to conquer mighty Mount Kilimanjaro, but you don't...

In just a week, you can visit not one, not two, but three of Tanzania's...

Even in as little as a week, you can experience Tanzania's most famous...
Tanzania Tours & Itineraries

Jonathan G.
Colorado, United States
"Tanzania and the national parks truly were unforgettable. Our driver / guide Living was great and PK Tours did a good job arranging everything. Bianca also w..." read more
Traveled to Tanzania as a family in June, 2018
Create your custom-made trip to Tanzania
Get Started